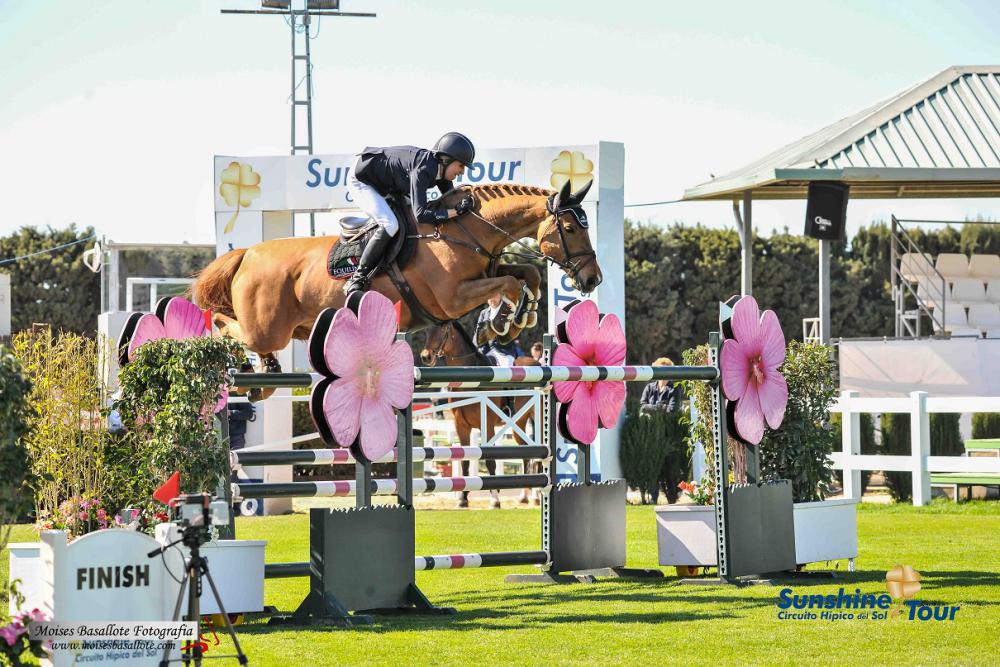 The second CSI4* of the Sunshine Tour kicked off today and will culminate in the Invitational GP on Sunday the 25th of March.

The 1.50m, Big Tour D class had 78 entries today and was won by the well known American, Olympic rider, Laura Kraut with the lovely mare Whitney (Indoctro x Majestic by Concorde) in 65.47sec. Second place was taken by the British rider, Leonie Aitkenhead also riding a top quality mare, Clane K, in a time of 66.17sec. In third was the Swedish rider, Antonia Andersson on yet another mare, Caville in 66.35sec. Fourth and fifth were taken by the British riders, David McPherson on Jimcy Du Lys and Guy Williams on Rouge De Ravel.

In the 1.45m, Big Tour C, the top two places were taken by British combinations. The class was won by Matthew Sampson (GBR) who also won the 7yr-old final yesterday. This time he was riding the mare, Dy Korette (Indorado x Korette by Farmer) and stopped the clock in a very fast time of 30.09sec. In second place was David McPherson on Armani Des Maraichers in 31.35sec and in third place; in 32.25sec, was the Columbian rider Dayro Arroyave on S&L Through The Looking Glass. Fourth and fifth went to the British combinations of Thomas Whitaker on Ebelina W and Joe Whitaker on Diola.

In the 1.40m, Big Tour B there was a Spanish victory with Gonzalo Añón on AD Amigo B. In second was the Polish rider, Natalia Czernik on Quasi De Kergane; in third was the British rider, Jordan Gann on Lakeland Dancer. Fourth and fifth were taken by the Belgian rider, Virginie Thonon on Falbert SB and the American rider, Julie Welles on Broekie.

The Big Tour A2, was won by the British rider, Simon Crippen on Atlanta VIII. Virginie Thonon was again in the rosettes, this time in second place with Danaide Du Houssoit. In third and fourth were the British riders, Faye Adams on Demograaf and Chloe Winchester on Campino 457. In fifth was the Chilean, Agustín Covarrubias on Solaguayre Quitrina.

In the Big Tour A1, Chloe Winchester took first place, this time riding Sportsfield. The Danish rider, Lars Bek Andersen on Lumbumbo was second and in third was Thomas Whitaker on Peppercorn. In fourth was the Argentinian rider, Richard Kierkegaard on Airflow Z and fifth was a Spanish rider, Carolina Aresu on Lamparilla.

She was more than a second faster than the British combination of Karl Robins on Stapleton Mist, who stopped the clock in 35.72sec. In third and fourth were the British riders, Abbe Burchmore-Eames on Wilandri E and Jodie Hall Mcateer on Coquin De Coquerie Z. Lara Postillon for France, was fifth riding All Good.

In the Medium Tour B class, the Spanish rider Kevin González De Zarate flew around the course to take a well deserved first place on Calipso Van De Bergdal. In this very competitive class, the British rider Pollyanna Gredly on Unex Arantos, came in a close second; and Julia Nagler from the USA was third riding Killossery Kuidam. Joe Veitch (GBR) on Nibors Aston and Lucas Rosado (POR) on Up Du Salbey, took fourth and fifth places.

The Medium Tour A was won by the British rider, Kayleigh Watts on Kilbarron Rue. Second place went to Ireland, for Gerard O’Neill on Dondoctro Ryal K and third to Columbia by the hand of Nicolás Chaustre and Keve. The British rider, Carron Nicol on Nistria V/D Winning Z was fourth and in fifth was the Swiss rider, Charlotte Petit-Jean on Dastina.

Competition continues tomorrow with 12 classes in all and amongst them are two ranking classes, the 1.45m, Big Tour C and the 1.50m, Big Tour D. From the latter the top ten riders will be put forward to compete in the most prestigious event of the whole XXIV Sunshine Tour, the Invitational GP, which is held here on Sunday.