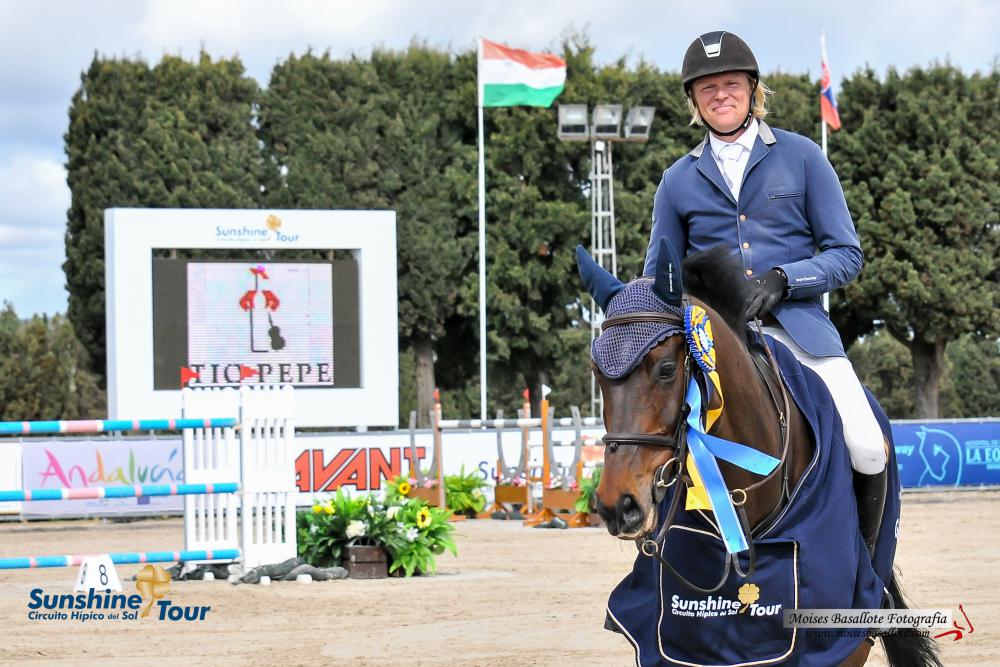 Taylor Alexander (USA), Marie Longem (NOR), Lars Bak Andersen (DEN) and Otti Verdú(ESP) were the top competitors in this class.

Fredrik Jönsson went in to the six horse jump off of the TÍO PEPE Big GP today at the XXIV Sunshine Tour meaning to win. Riding Cold Play (Contendro I x Honey Moon). He had a very fast time to beat, set by the American combination of Taylor Alexander, and Ryanair De Riverland.

The course built by the Italian designer Uliano Vezzani, had proved extremely demanding; the jump off was equally testing for this important class. In the end his time of 40.73sec was just 0.2 sec faster than the American rider’s time of 40.93sec.

In his interview he told us “It is my first time here at the Sunshine Tour and I am very happy with my result today. It was a difficult track and the course designer did a great job. Cold Play is a ten year old gelding, he is very careful and we are good friends which makes us a good team.”

Just behind, Taylor Alexander in second, and taking third, was Marie Longem on Benito in 41.99sec; and in fourth was Lars Bak Andersen riding Quel Filou 13 in 42.92sec. Once again in the rosettes this time fifth, was the young Spanish rider Otti Verdú on Top Lulú in 45.49sec.

Big Tour C, 1.45m, was a Ranking class and was won by Matthew Sampson (GBR) on Gloria Van Zuuthoeve (Thunder Van De Zuuth x Glorieuze) in 60.91sec. The American rider Laura Kraut on Whitney was second in 61.59sec. In third was another Brit, this time Chloe Winchester on Ragga Muffin in 64.31sec; in fourth was Billy Twomey for Ireland on Kimba Flamenco in 64.64sec. In fifth was the Brazilian rider Karina Johannpeter on Lucero LS La Silla in 65.14sec.

Once again the British were on winning form in the 1.40m, Big Tour B and once again by the hands of Matthew Sampson this time riding Dy Korette. It is the second time this pair have won this class. In second was the Dutch rider, Doron Kuipers on Zucces and in third was the Spanish rider, Alfonso Arango on Ursula D’Auge. Chloe Winchester was again in the rosettes taking fourth and fifth places with Sportsfield Our Clare and Campino 457.

The Big Tour A2 was won by another British rider, this time Harriet Nuttall on Silver Lift, this being their third win in this class. In second place, the Irish rider, Gerard O’Neill on Billy Anchor and in third was Torben Köhlbrandt for Germany, riding Cassina Van Den Berg Z. Carlos López-Fanjul (ESP) on Cerano was fourth and El Ghali Boukaa from Morocco on Clifford Du Faurieu Z was fifth.

The Big Tour A1 had a British top three, Georgina Crumley on Haifa O.L. took the win, Simon Crippen on Atlanta VIII was second and in third was Joe Whitaker on Urbino De La Roque. Nicolás Toro (COL) on Diamond Of Minka was fourth and Pieter Kenis for Belgium, was fifth on Eugene Van’t Valleihof.

The 1.30m, Medium Tour A was won by the Spanish rider, Roi Calviño on Iroco De Villafranca. In second was the British rider Hollie Pearce on Delina II. In third was the Belgian rider, Elias Olsen on Ballerina; and in fourth was Italian rider, Pierpaolo Addis, on Dinky Tiy D’Hof Ten Bos. In fifth place was the local Spanish rider, Alejandro Fernández riding Caleo 5.

Finally in the Small Tour, there was another British whitewash. Abbe Burchmore-Eames on Casti Aneira won the C section for the sixth time on Casti Aneira. Alice Codd on Seapatrick Dougaleena won the B section and Rachael Evison on Scylla D’Ouilly won  the A section, for the eighth time!

Tomorrow is the last chance for the Young Horses to jump before the Finals on Wednesday. A few will still be aiming to get the last clear needed to qualify. On Thursday, we start off the last weekend here at this year’s Sunshine Tour with the Finals of each of the Tours and the ultimate class, the Invitational GP on Sunday.