´Billy Utah´ ridden by Jessica Burke is the winner of the 7yr old Final, sponsored by Ashford Farm 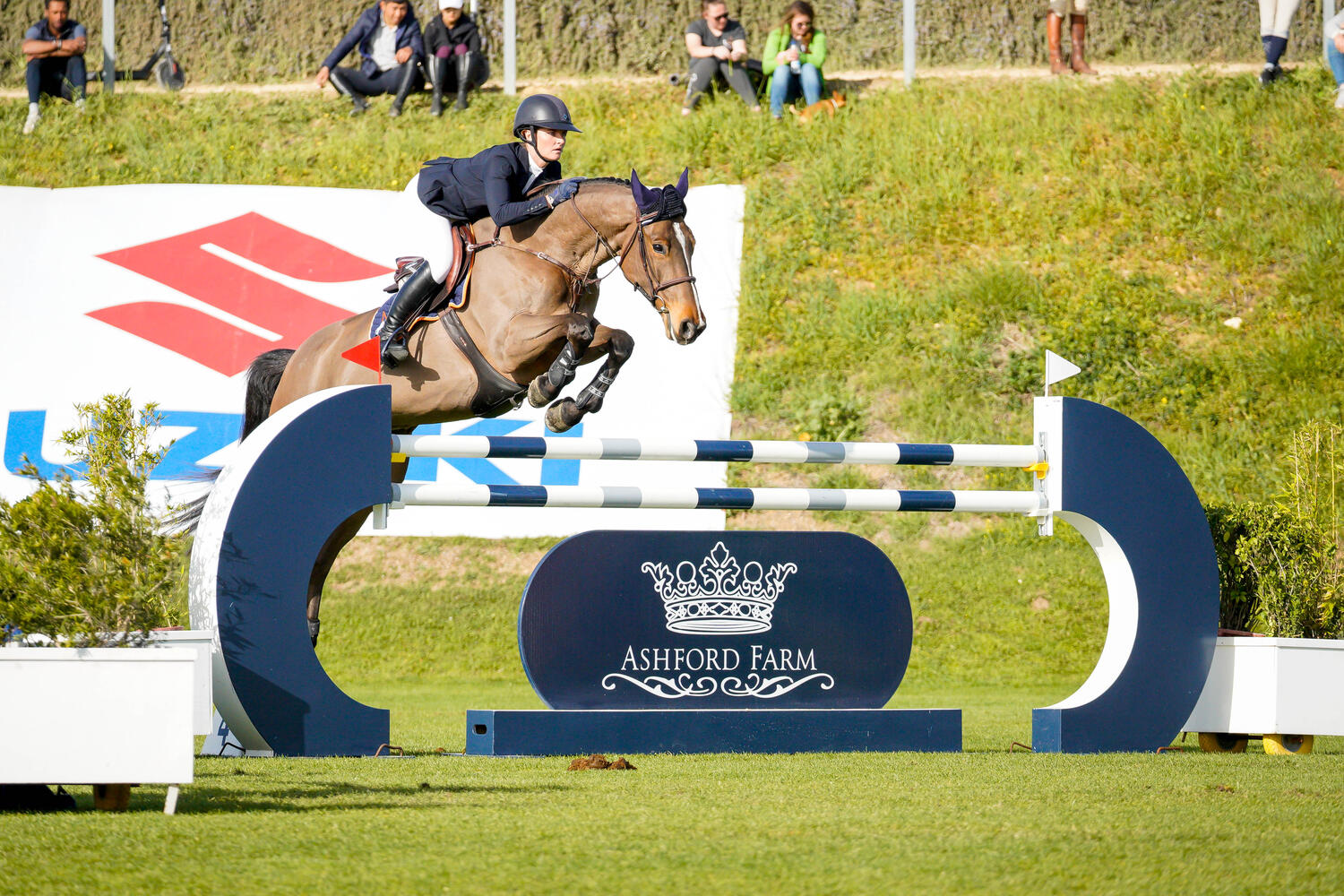 The Irish anthem rang out across the arena today during the prize giving at the 7yr old Final.  Jessica Burke was our winner with ‘Billy Utah’ a lovely chestnut mare owned by Louisa Church and bred by the Billy Stud,. ‘Billy Utah’ is by one of the Billy Stud’s most famous stallions, ’Cevin Z’.  This stallion carries the fabulous lines from ‘Cor de la Bryere’ and ‘Carthago Z’ and is also well used as an eventing sire.  The dam sire of this lovely mare is another well known stallion used by the Billy Stud, ‘Vetcha’, a KWPN who is also the sire of the well known ‘Billy Congo’ who has previously competed here with William Funnell, in the top Big Tour classes.  Today Jessica’s time around the demanding jump off was a mere 37.76s and this was fast enough for them to win the class.

Gilles Thomas from Belgium was riding the lovely ‘Puskas de Kalvarie’ today, and this pair stopped the clock in the jump off, in 38.22s taking second place.  This BWP gelding is owned by Nieuwenhof and is by ‘Sea Coast Don’t Touch Tiji Hero’ a 140/145m jumper, who was ridden successfully by Gudreen Patteet amongst others and who carries the legendary 160m show jumping stallion, sadly recently deceased, ‘Diamant de Semilly’ genes.  The dam sire is another legend in showjumping, ‘For Pleasure’  carrying the ‘Furioso’ lines and going back to G line Hanoverian, ‘Grannus’.  Both Lars Nieburg and Marcus Ehning rode this stallion and had numerous Grand Prix wins.  He retired at the grand age of 20yrs in 2006.

In third place was the German rider, Kendra Brinkop who was riding ‘I’m Fancy VDM Z’ who is owned by Stephex Stables.  This chestnut mare is by ‘I’m Special de Muze’, who is by ‘Emerald’ a stallion ridden by Harrie Smolders in both World and Nations Cups.  Her dam sire is very famous Belgian stallion, ‘Vigo D’Arsouilles’ who was ridden by Philippe le Jeune again in numerous World and Nations cups and who was by another legend, Nabab de Reve.

In fourth place was another Irish partnership, Harry Allen riding ‘Corazon Z’ (‘Centurio’ x ‘Heartbreaker’) and in fifth, Dutch rider Doron Kuipers with ‘Sea Coast Chica VVZ’ (‘Comme Il Faut’ x ‘Chacco Blue’).   The winners received their trophies from Michael Cristofoletti,  representing the famous Ashford Farm Stables which is based in Belgium and dedicated to the breeding and training of horses for elite competition, and which was founded by Enda Carroll.

28 horses got through to the jump off in the 1.30m Final for the 6yr old horses from a field of around 100 horses. The winner was ‘Grenoble de Riverland’ a Silla Français (Montender x Hermes D’Authieux) owned by First Horses SA and ridden by the Belgian rider Ignace Philips de Vuyst.  They completed their round in 41.29s  In second place was the Irish rider Harry Allen with ‘Diva Della Caccia’, a mare by ‘Baloubet du Rouet’ x ‘Quaprice Bois Margot’ and owned by Ballywalter Stables.  In third was the British rider Emily Sage with ‘Vogue TM’ (‘Vivant Van de Heffink’ x ‘Conthargos’); fourth Danish rider Jonathan Hvalsøe Saul with ‘Disney Z’ (‘Dimitri Z’ x ‘Numero Uno’) and in fifth was Swiss rider Olivier Bujard with ‘Quintano Van’t Smiske (‘Corydon Van T&L’ x ‘Vancouver D’Auvray’).

The winner of the 5yr olds was ‘Daredevil’ by Dominator 2000 Z,  another horse with ‘Diamant de Semilly’ lines and who won the Doha 5* GP in 2021 with Christian Ahlmann and the dam sire is ‘Pronto’.  Owned by GWH SPRL  this mare is ridden by the Belgian, Manuel Thiry and she didn’t put a foot out of place in the first two weeks Andalucía Sunshine Tour.  Today they finished their jump off round in just 33.06s.