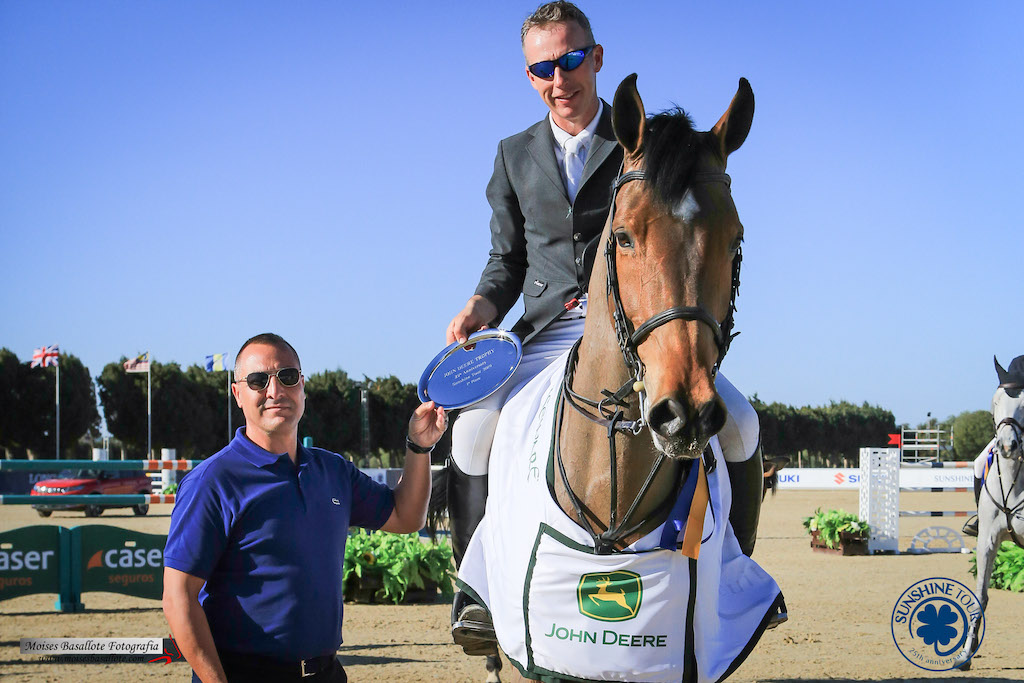 Once again Ireland tops the podium in one of the biggest classes at the Sunshine Tour.

Once again Ireland tops the podium in one of the biggest classes at the Sunshine Tour.

Today was the Small GP class of this second CSI3*. It was sponsored by the very well known agricultural machine manufacturer, John Deere.  In what is becoming a habit here in the important classes, Ireland came top of the podium with Dermott Lennon riding the 10yr old mare “MJM Pursuit” and winning with just under a second in hand.  There were 16 riders through to the jump off, of which just half had a second clear.  Dermott Lennon is a very experienced international ride who won both the European Championships in 2002 and also the World Equestrian Games, held in Jerez de la Frontera that same year.  In second place was Czech rider, Emma Augier de Moussac on “Rubio Monocoat Electric”, a mare that she classified with for the World Cup.   In third was the very consistent Lisa Cubitt (NZL).  The highest placed Spanish rider was José Diaz Vecino, who has just arrived at the Tour.

In the 1.40m, Dermott was also on the podium with “Vivalgot”, but this time he was beaten in to third place.  The British rider Matthew Sampson rode an incredibly fast round on “Geneve R” and was over 2s faster than the fellow Brit, Jessica Dimmock on “Billy in Fashion” who was second.  Matthew was a previous winner of the Invitational GP here at the Sunshine Tour in 2013. All in all,  today was a good day at the office for him as he also won the 1.35m with “Firefly W”.

Álvaro González de Zárate for Spain, also had a great day taking second behind Matthew, with “Elion V” but he bettered this placing in the Big Tour, 1.30m class by winning with“Monboulette” who has had incredible success here at the Tour.

There were 137 horses in the Medium Tour classes. The 1.35m accumulator  class was won by the British rider, Charlie Jones with a cleverly ridden round in 61.04s, almost 2s faster than the Lithuanian rider Juan Pablo Garriz in second.  The Canarian rider Ismael Garcia Roque, was the highest placed Spanish rider in this class taking third place with “Grey Man”.

There were 10 classes in all today,  plus three classes for local Pony riders.