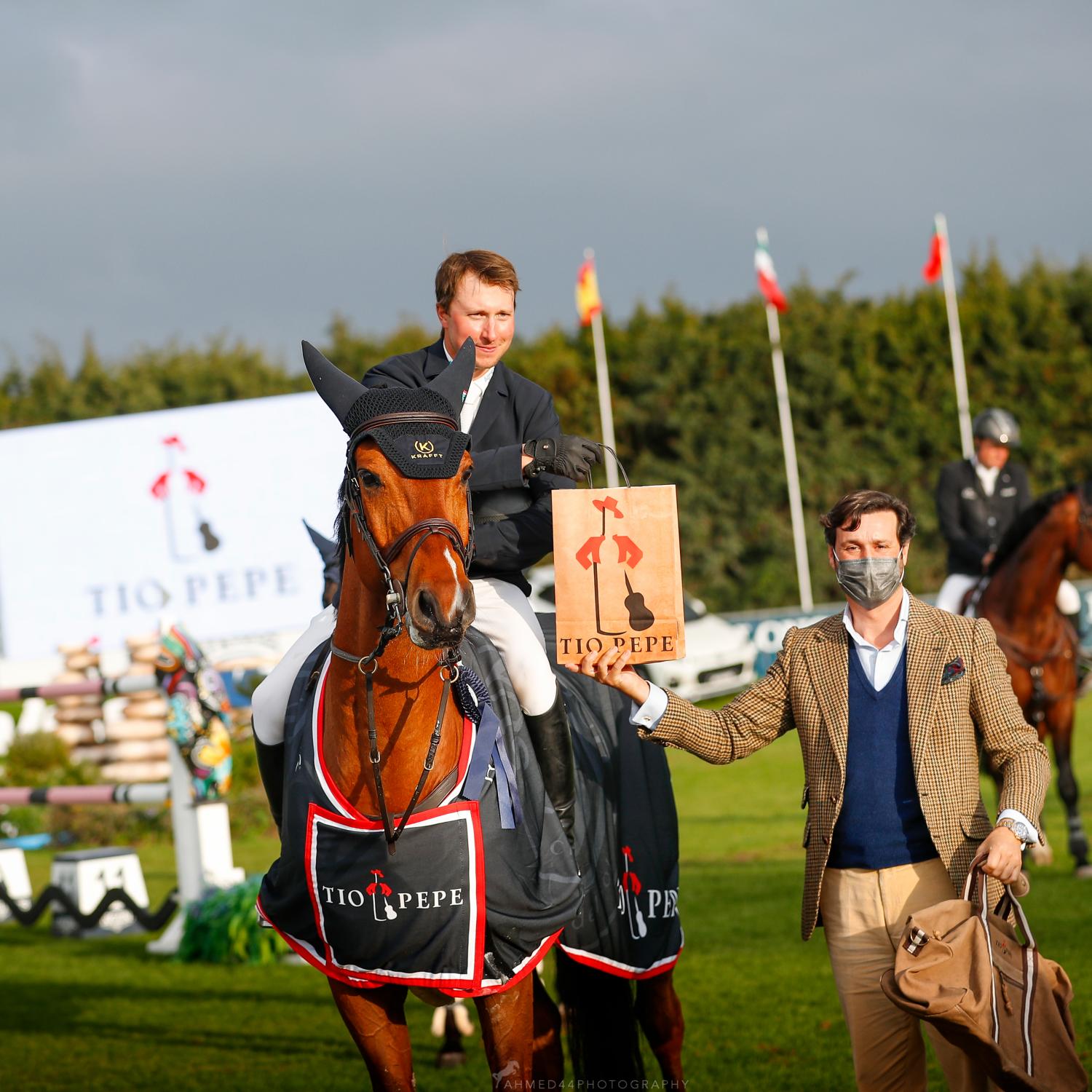 Swedish riders shine on a very competitive day with more than €65,000 euros of prize money to be won!

The Swedish National anthem sounded out across the showground today, on the penultimate day of jumping of this second CSI4*.  The Tío Pepe sponsored class was held on grass in the David Broome arena and the top two riders on the podium were Swedish.  After some brilliant riding Douglas Lindelöw and Angelie Von Essentook took first and second places  (resp) in a very competitive class with over 93 entries.  The course was designed by Elena Boix from Spain, our winner, Douglas Lindelöw commented that he thought it was: “hard, but this is how it should be when there are riders of such a high level here competing.”

Last Sunday Douglas clearly demonstrated his talents when he came third in the Equine America Grand Prix class.  He was clearly just warming up for this win, riding the very same gelding:  “Casco Blue, he is number one in my stables.  He has been with me for eight years and he is now eleven.  Together we have had some great results in very important competitions, including the World Cup.  Douglas plans to participate in some Nations Cup rounds this season and: “I hope to take part in the European Championships.”

In second place was Angeline von Essen who was riding her Holsteiner mare“Cochella”.  This pair are actually on the XXVII Sunshine Tour official poster. Close on their heels in third place was Jack Whitaker riding the lovely eleven year old mare “Scenletha”.

One of the other top classes today was the Longines ranking, Small Grand Prix which was sponsored by YOUHORSE. Today the auction started at midday.  This will be the ninth edition of the famous YOUHORSE auction which is organised by Everse and Waldman Horses. The auction is officially open to bidders through the website www.youhorse.auctionuntil March 1st. There are 13 horses being presented, whose ages range from 4 to 10 years old.  Those competing at the Tour have very good results.

In this YOUHORSE Trophy class, the top spot on the podium was also claimed by a Swedish rider, this time Alexander Zetterman riding the nine year old Stallion “Triton Hastak”.  This was another big class with 92 competitors taking to the grass Hickstead arena.  Only 11 horses jumped clear and went in o the jump off with many having time faults.  Alexander’s jump off time was an incredible 36.85s and he beat off the challenge from the Spanish rider Sira Martínez Cullell who was riding “Mano Negra van de Bucxtale” and who ended up in second place.  This pair were crowned the Spanish Young Rider champions last December.  Sira told us: “I bought Mano Negra a year ago when he was seven thanks to my partner Paco Goyoaga and his partner Benedetto Mancini. The horse has a very good head and is very competitive, he alway wants to jump clear.” She went on to tell us that the course:  “was very complicated and technical, it was big and the time allowed was extremely tight.”

Sira also was the winner of the Big Tour A class today, another big class with 79 entries.  This time she was riding “Hanna van het Lambroeck” and won in a time of 51.40s, 4 seconds faster than the Spanish rider Mariano Martínez Bastida who was second. ““Hanna” is a very competitive and she allows me to be at ease in the speed classes.  She is 14 years old and my plan is that she accompanies my top horses.  I am very happy, this is the second class she has won here at the Sunshine Tour.  She always tries to give me 100%.”

The Big Tour B, was also sponsored by Tio Pepe, and there was a win for the talented Egyptian rider Mouda Zedaya, who upped his position by one place in the same class last week.  Today he was riding “Morocco” and beat off the challenge from Jérôme Guery who came in second on the lovely “Grupo Prom Isidor Carcaletto”.

This was a busy day of jumping with 12 classes in all, with some great jumping and results for many competitors.  All results can be seen on the web page  www.longinestiming.com. Tomorrow is the last day of this second CSI4* here and the class of the week will be the Grand Prix of Andalucía.

You can watch all the action live on ClipMyHorse.TV and through the Mobile  App of the Sunshine Tour.