Great turnout on the first day of the CSI3* October Tour 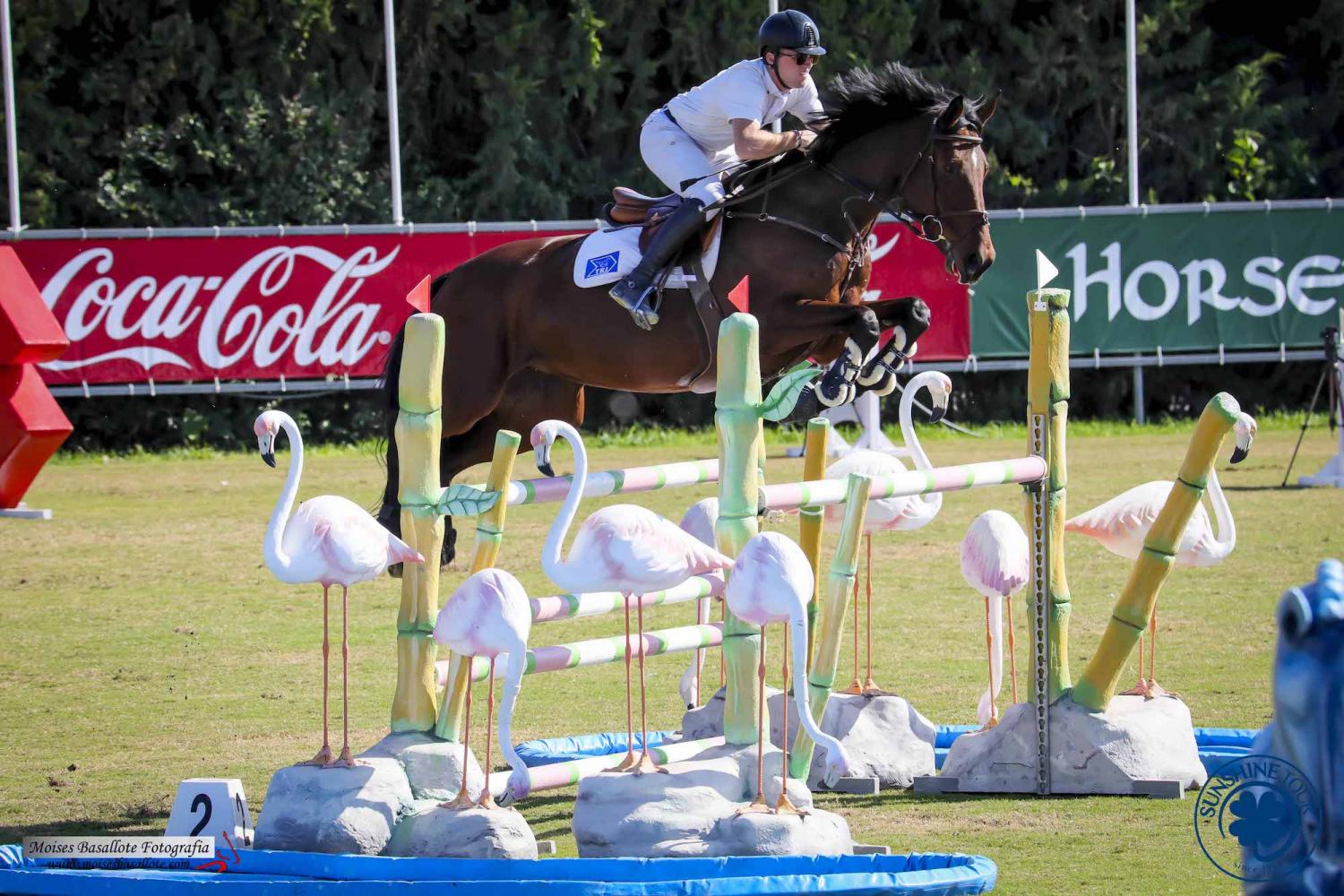 The CSI3* at Dehesa Montenmedio was under starters orders today with third week of our October Tour 2021. 538 competitor took to the arenas today, amongst them were some newly arrived faces including the Internationally renown Belgian rider, Ludo Philip

The biggest class today was the 1.45m, which was held in the grass arena, which is named after David Broome.  Today’s track was designed by the French course-builder, Cédric Longis, and consisted of 12 obstacles with 14 jumping efforts, including an option to jump a large water topped by a pole.

The Irish riders here are really making a dent in the podium places.  Just last Sunday at the end of the second week’s CSI2* we finished off with a super win from Max O’Reilly and today we start up again, this time with the win for Sean Monaghan. This young, 21yr old was riding Daisy Duggans’s super 8yr old mare,  EMS Adelaide who is by Mermus R.  Their finishing time in this speed class was a mere 65.98s, the only pair to come in under 66s indeed, the only pair under 67! Kevin González de Zárate and Recesvinto, for Spain, had a really good try at the time but although they finished in a mere 63.82s they had three fences down putting them way down the field.  Sean and EMS Adelaide have had a total of 12 internationals starts and have won 5 of these!

American riders took the rest of the places on the podium.  In second place was Charlotte Jacobs and her gelding Rincoola Milsean who is owned by Jason Higgins (by Aladatus Z, dam sire being that very famous stallion Cruising!);  whilst Julie Welles came in third with her regular partner, the very successful 10yr old mare Greatfull, who is Westphalian and by Congress 4, owned by Cherry Knoll Farm.

And these weren’t the only American wins today!  In the Big Class, 1.40m there was a podium whitewash.  Balkana du Tillard has had a few wins this season with her regular rider Olivia Chowdry.  The mare is by Kannan and very fast and forward going, she is owned by Atlas Equine Holdings LLC.  Their round was very clean and neat, they took a very well deserved win in a competitive field of 103 entries.

Heather Caristo-Williams took second place in the class with the 10yr old gelding,  owned by Jose Larocca,  Marciano MVF, by Stakkato.  In third place was the Olympic rider, Laura Kraut who was riding Galliano VM, a 10yr old, KWPN gelding owned by St Bride’s Farm.  The gelding is by Ukato.  These top riders looked very comfortable around the course which was built by Marcos Nuñez in the grass arena, Hickstead.

Laura Kraut hadn’t finished for the day as she also took third place in the Medium 1.35m class.  This time she was riding Seleste BZ, an 8yr old mare by Spartacus TN, also owned by St Bride’s Farm. The Italian rider Filippo Lupis with Dollar Boy O took second place in this large class with 87 starters and in first place was the Israeli rider , Regis Villain with the Numero Uno bred stallion,  Dreamer de la Pointe. Regis rode an excellently crafted round with Dreamer, setting off in a positive gallop and cutting every corner that he could,  this pair were the only ones to come in clear in under 60s and repeated their win in this class in the CSI2* last week.

The Young Horses were also back in the arenas today continuing their training and development.  In the 7yr old class there were some really lovely jumping rounds.  Winning the class and also taking second place was the Italian rider, Luca Moneta,  he rode the lovely Epic in to first place by mere hundredths of a second just pipping last Sunday’s winner, the mare Jolie Coeur D’Avril to the post.  Epic is a gelding, owned by Brigitte Stern from Switzerland.  He is by Con Air 7 and registered with the French stud book.  Jolie Coeur D’Avril, ZVCH is by Arko, dam sire being Nabab de Reve.  Both horses are showing a steady progression since they started with Luca in early 2020.

Jan Vinckier riding Kanula was the winner of the 6 yr old class today and this mare is by the very famous sire, Kannan, with the dam sire Quidam de Revel.

Classes begin at 09:00 tomorrow and there will be another very busy day of jumping.  You can watch live on the official channel ClipMyHorse.tv, on our web site and through the Sunshine Tour Application.