Holly Smith is the undisputed winner of the Suzuki GP 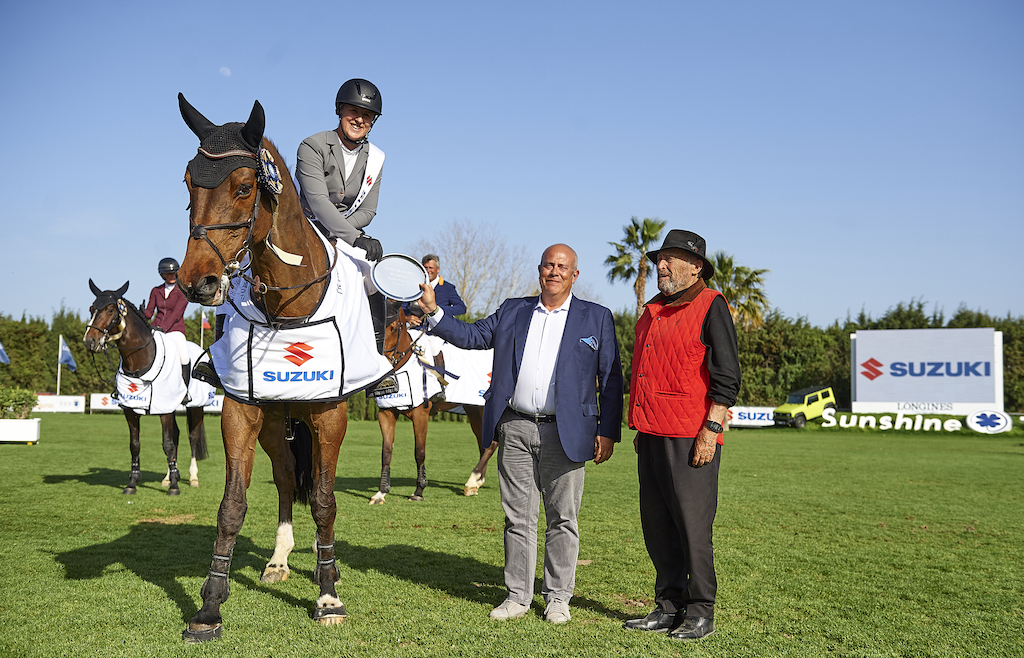 The CSI4*, Suzuki sponsored, Grand Prix today was an emotional and very exciting class.  The crowd was buzzing as the horses jumped the first round of this unforgiving course designed by Santiago Varela.  In the end only 8, top international riders got through to the jump off; Pénélope Leprevost, Cian O’Connor, Henk Van de Pol, Holly Smith, Pedro Junqueira, Laura Kraut, Marcel Marschall and Anthony Condon. With this line up,º the jump off was incredibly competitive and fast.

With a fully supportive crowd in the stands and flying through the finish as the last rider to jump, the top British rider, Holly Smith and “Hearts Destiny”, shot in to first place with over a second to spare. Holly told us “My horse is exceptional, this is the first Grand Prix that we have won together and I am delighted with him. There was a long gallop to an enormous upright, followed by a very tight turn back afterwards and I was unsure if I should do one or two strides.  But I went for one stride knowing I had to go for it if I wanted to win.  It turned out well!

In second place was Pénélope Leprevost who was second last to go and also rode a fast and very stylish round.  She temporarily took the lead, to the delight of the crowd, on “Vancouver de Lanlore”.  Third place was won by Henk Van de Pol, riding “Looyman Z”, and a competitor who is rarely off of the podium here at the Sunshine Tour.

The Japanese car firm, Suzuki, was the Sponsor of this GP and presented their new “Jimny” car and its All Grip system, here at Montenmedio.

The 1.45m del Big Tour was won by the Turkish rider Derin Demirsoy, who is a recent graduate from the Young Riders Academy. Riding “Dadjak ter Puttenen”, he beat the Spanish rider, Julio Arias on “Armani des Maraichers”.

TheMedium Tour GP was 1.45m and sponsored by “COPE”. This was also held in the David Broome ring. The winner of this class was the American rider, Julie Welles riding her very fast mare, “Nouvelle”. They won the class with ease and with 4s in hand over the Irish rider Greg Broderick; a great way to celebrate St Patrick’s Day.   In third was the Spanish rider Jose Fumero with his mare “Donita” who is a recent addition to his stable.  “She is a very classy mare with a lot of quality and I am very happy that I now have her in my stables. I love her she is my favourite type of horse

It was a great day of top level competition here at the Sunshine Tour,  finishing off this CSI4* week that paid out a total prize money of €240.000€.