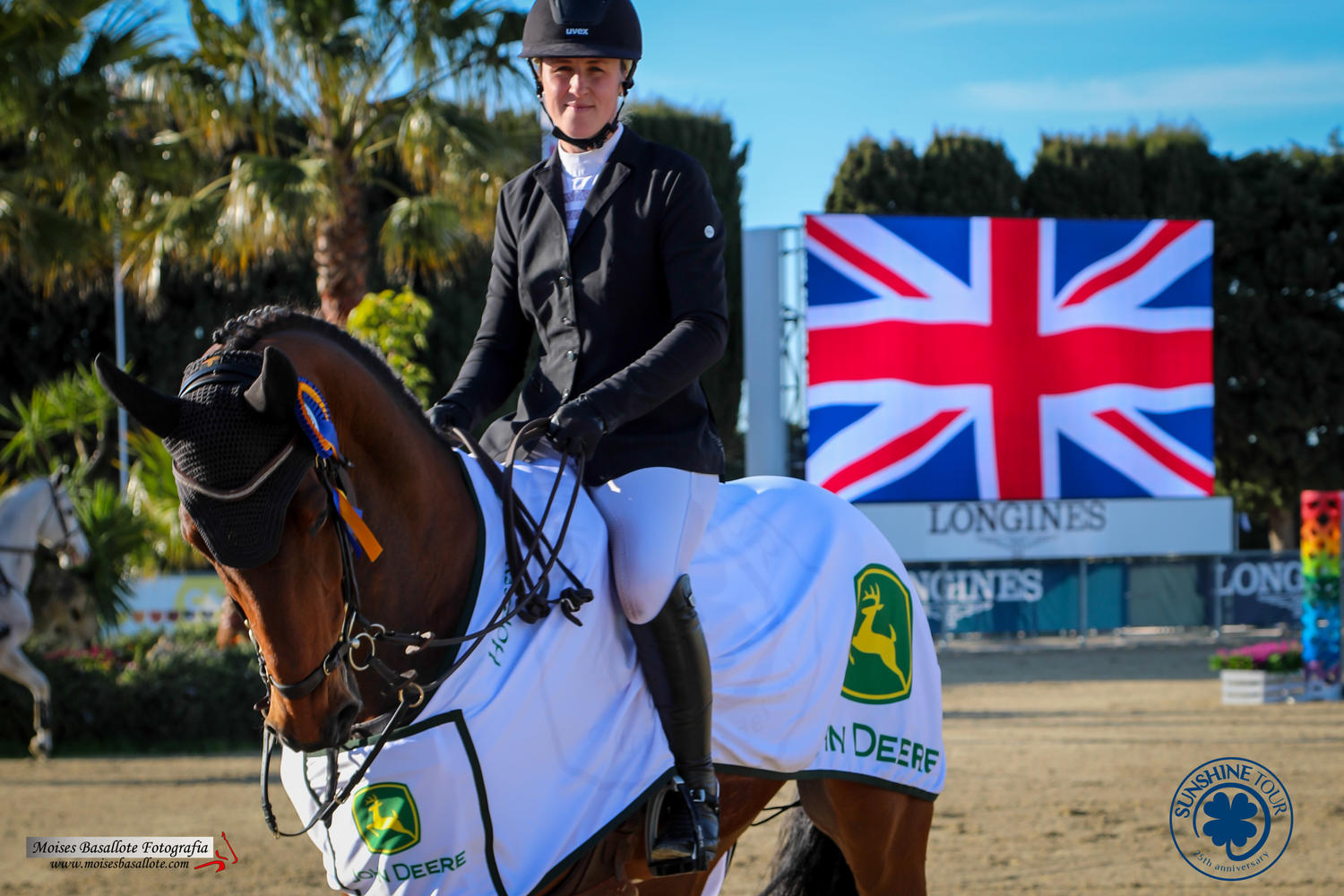 Last year’s CSI4* Suzuki Grand Prix winner, the very talented Holly Smith, has just arrived here at Montenmedio and not content with fourth place yesterday with “Heart’s Destiny” in the 1.50m BT class, she brought out her other horse “Denver” in the John

Holly took over the ride on “Denver” last September and they had a great start together getting along immediately as the horse changed careers from eventing to pure showjumping. She has already had great success with him, in the final of the Nations Cup in Barcelona where she won a class and they were third in January in the Amsterdam Grand Prix World Cup.

16% of the competitors, 14 riders, got in to the jump off, including the British rider, Harry Charles; Gonzalo Añón from Spain; the Italian rider Roberto Previtali who took second place with “Viceversa de la Roque” and the Irish rider Anthony Condon who took third place riding “Zira VH Kapelhof Z”. Anthony was second in the Grand Prix, Longines Invitational class held here last year.

Portugal had wins in two classes today. The 23yr old rider Tiago Morais in the  1.40m with “Havana de Loyal”. “She is only 8yrs old and has just started jumping at 1.40. Up to now we have only been competing in 1.30-1.35m classes and winning a lot! She is a very clean jumper and fast. I hope to ride in 1.40 classes until the middle of the season and then push up to 1.45m.” Tiago is at the Sunshine Tour with three horses. “I have two young horses already qualified for the Young Horse Finals in week six. The 5yr old “Lascadello-F” and the 6yr old “Jamal F. All the horses that I have here are bred by my boss Victor Frias who owns a stud of more than 100 horses.”

The second Portuguese victory was from Rodrigo Sampaio, in the Big Tour 1.30m with “G van de Oudenbosch”.

In the 1.35m the winner was, Columbian rider, Nicolás Toro on “Hareina” , who is based in Belguim at his stables ‘Toro Horses”. In second was a Spansih rider Ivan Serrano with“Velcom”. Nicolás Toro, is here at Dehesa Montenmedio with 16 horses. “Hareina, the mare with which I won is an 8-year-old and she is relatively new in my stables. Now we are starting the season here at the Sunshine Tour during the last three weeks and my plan is to get them to higher level and qualify for the Longines Invitational Grand Prix”.

The Brits had a clean sweep in the other big class held here today. It was sponsored by Massimo Dutti. The winner was Robert Murphy on “Elan”, Alice Watson with “Billy Lemon” came second and Jessica Hewitt was once again in the ribbons with “Hot Bluebird” in this ‘hotly’ contended class of 85 entries.

Fidel Dávila, who rides for the ‘Yeguada Finca Maeza’, continues to do well here and came top of the podium with “Chantre” in the Medium Tour B where  he repeated a precious win in one of the less used arenas, number 19.

British riders, Sophie Holliday and Ethan Bracken won the other two classes in this section.

The installations here at Dehesa Montenmedio are widely considered as the very best in Europe and one of the best in the world. There is good reason for this, alongside a total of 21 arenas of grass and All Weather surfaces, there is enough room to comfortably house 2,298 horses, a number that very few places in the world can take. This week almost 2000 boxes are occupied. “The best thing of all is that there is never a moment when you feel overcrowded by people, or the riders and their horses working in the arenas. This is thanks to the enormous area that we have available to us here at the Dehesa Montenmedio.” In a quick interview our Head of Maintenance told us.

Tomorrow is the highlight event of the week a CSI3* Grand Prix sponsored by Caser. You can follow this class and all others directly on our Sunshine Tour Application and on the popular equestrian channel Clip My Horse.