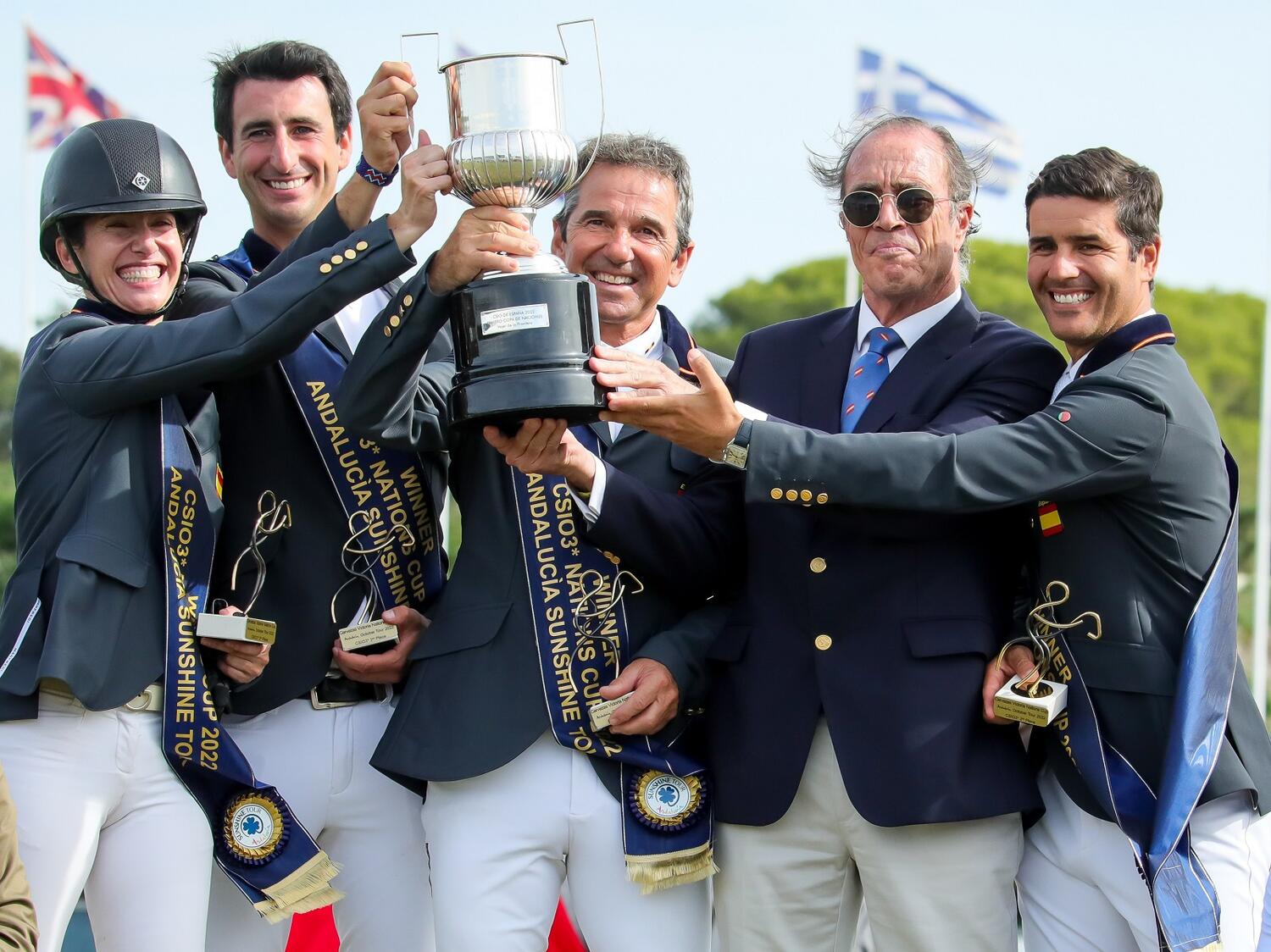 Chef d’equipe for the Spanish team was Carolo López Quesada; the riders Jesús Garmendia, Ismael García Roque, Santiago Núñez and Teresa Blázquez. The team won gold with a tally of just 4 faults and without the last rider needing to jump!

Today it was Gold for Spain in the Nations Cup. The whole event was sponsored by Cervezas Victoria who are regular sponsors of the II Andalucía October Tour.  The Spanish chef d’equipe was Carolo López Quesada and he was delighted with the performance of his team. With three riders jumping clear in the first round, the team were in the lead going in to the second part of the competition. Jesús Garmendía Echevarría was riding the brilliant ‘Callias’; Santiago Núñez Riva with the lovely mare by ‘Crown Z’ ‘Chakira Z’ and Ismael García Roque with the chestnut ‘Gaudí’.  These three all ‘popped’ around the demanding course in great style. Jesus repeated his immaculate clear in the second round keeping Spain in the lead, Teresa Blázquez Abascal, finished her second round in great style jumping a very smart round with ‘Nasa de Toxandría’,with just one unlucky pole and kept Spain well in the lead. Santiago was the third rider to go and he flew around clear and that was it, Spain had won and Ismael had no need to jump!

However the competition wasn’t over yet with Columbia, Great Britain and Ireland all vying for silver and bronze places. It was a close run thing and in the end came down to just one pole and to time. Colombia took silver with 12 points. Their chef d’equipe was Heinrich-Hermann Engemann and the team was made up of Camilo Rueda with ‘Indus van het Keysereyck’; Camilo Robayo with ‘Steve-O’; Nicolás Toro with ‘Isa’ and Santiago Díaz Ortega with ‘Chasandro Boy’.  Santiago was the only rider to jump clear in both rounds and it was his round that clinched the silver medal.

Great Britain had a very young team of riders today which was wonderful to see.  The chef d’equipe was Di Lampard and she was ‘absolutely delighted with todays’ result with such a new team’. They had a lot to live up to today, as Great Britain were the winners of the last nations Cup here at Montenmedio in 2021, and indeed they did themselves proud. The riders were Robert Murphy with ‘How Easy’; Joe Fernyhough with ‘Calcourt Particle’; Tim Gredley with ‘Medoc de Tosandría’ and Skye Higgin with ‘Djordania du Tillard’. In the end the team finished on 16 points, with all the riders just touching a pole in the first round and then Tim and Skye stepping up and riding superb clear rounds in the second round.

Ireland took fourth place also with 16 points.  So they finished on the same score as team GB but with time taken into account, they didn’t quite make the podium finishing in just under three seconds slower overall! The chef d’equipe was Michael Blake.

Belgium finished in fifth place with 24 points, with Sweden, Canada and Brazil taking up the top final places in the top eight that got through to the second round. This Nations Cup was also a qualifier for the 2023 European Championships.

Meanwhile as the crowds cheered on their teams in the main arena, jumping continued across the showground as usual! There were eight other classes today, one of which was a Longines Ranking class for the Federación Ecuestre Internacional.  This was also won by a Spanish rider, a regular face here at Montenmedio, Jesús Garmendia Echevarría and who has been doing really well here. He was riding the super 12yr old ‘Valut 2’, who is by ‘Valentino 240’.  In second place was the Polish rider Andrzej Oplatek with ‘Le Cordial’ and in third was Jodie Hall Mcateer (GBR) with the lovely ‘Catoki’.

The winner of the CSIO3* 1.45m was British rider Louise Saywell with ‘Carlina d’Argouges’. Joe Fernyhough had busy day topped off with a great win in the CSIO2* 1.40m with ‘Kimba Castello’.

America rider Molly Hay with ‘Billy Bilboa’ was our winner in the 1.20m and the 1.10m was won by Spanish rider Bet Torrelles with ‘Venilsia de Lojou’.

In the Young Horse classes, 7yr olds, once again the talented Portuguese rider Rodrigo Giesteira Almeida was on the podium, our winner with ‘Karonia L’ and in the 5yr olds the German rider Cassandre Malherbe had a lovely win with ‘Fly Veganair Z’.

Tomorrow we continue with nine classes which include a Longines Ranking class.  Jumping will finish on Sunday with the Andalucía Grand Prix which is a qualifier for the European Championships 2023.