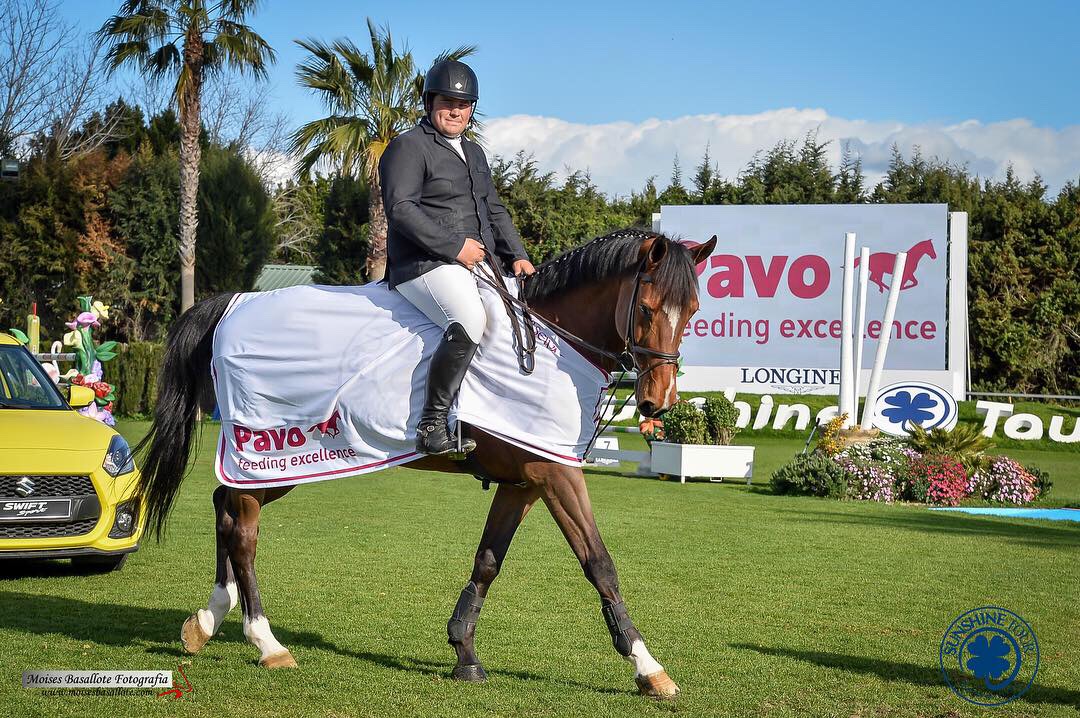 Today was a day of familiar faces on the podium. Jake Saywell, who is having an unbeatable time here at the Sunshine Tour; was the winner of the 1.50m class sponsored by Pavo riding the lovely mare, “Havinia van de Roshoeve”.  This class was also the thirteenth FEI Longines Ranking class since the beginning of the Tour.  This young British rider, who was also previously the winner of the CSI2*Grand Prix here, and today rode a faultless round that was nearly 6s faster than the experienced Dutch rider Eric Van der Vleutenriding “Djoost Again” owned by Marta Ortega, who took second.

The1.45m Big TourC, was won by 71 yr old, Michel Robert from France riding the mare “Emerette” and beating 50 other competitors.  “I have all the experience in my head but the spirit of an 18yr old.  I have no problem with being the oldest competitor here at the Tour, as I feel like a kid.”

In second place was the Canadian rider, Kara Chad who is currently riding under the wing Eric Lamaze, on his very fast mare, “Viva”.  They have been competing together since last year and already have some great results in 4 and 5* International events.

The internationally renown Irish rider, Trevor Breenwas the winner of the Invitational GP here in 2018.  He has recently arrived here at the Tour and today got off to a flying start in the 1.40m with third place.  The winner of this class was the Dutch rider Yves Houtackers.

Two of our frequent winners here, Lisa Cubitt and Álvaro Gonzákez de Zárate took the top of the podium in the 1.35 and the1.30m Big Tourclasses (resp).

The three Medium Tourclasses, rather aptly on the International Women’s day,  where won by three ladies.  Alison Barton took first and third place in the 1.40mwith Kayleigh Watts slipping in to second, in a very tight time class.  The Swedish rider Sandra Fransson took the top two places in the 1.35m B class, first on  “Charouet” and second on “Congstar PS”. Kayleigh Watts was back in the rosettes this time easily winning the 1:30m class with“Ebriolita”.

The Small Tour classes were dominated by the British riders.