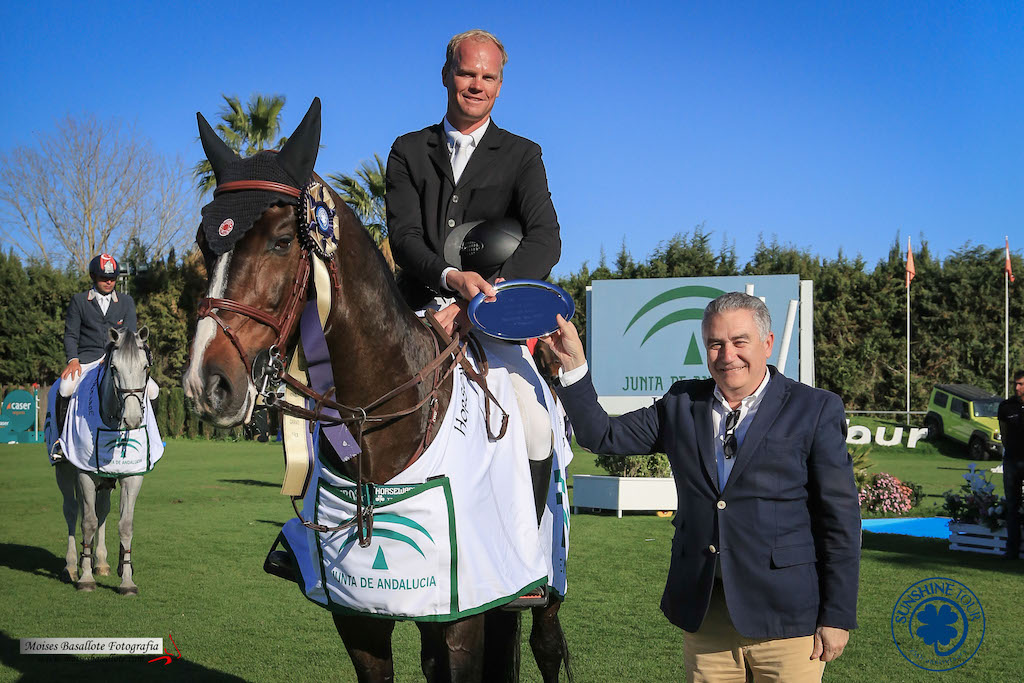 The class was sponsored by the Junta de Andalucia and brings the CSI3* and fourth week here at the Sunshine Tour to a very exciting climax.

The ‘Junta de Andalucia’ Grand Prix track, was brilliantly designed by the Italian, Uliano Vezzani.  The very last combination to go in the 9 horse jump off, was the very talented Belgian rider, Jérôme Guery riding the amazing “Quel Homme de Hus”. His Incredibly fast and stylish round won him the class as he slipped in to the lead, just in front of Pénélope Leprevost who was second last to go on “Vancouver de Lanlore”.  Despite the fact that Pénélope’s round looked unbeatable and was a lesson in speed riding, the Belgian rider who currently sits in 44th place in the FEI, Longines Ranking; managed the pressure and rode beautifully even though he told us later;  “I thought the stallion was slower, but it turned out not to be so; he was very fast and we managed to beat Pénélope!”

Of the nine riders that passed through to the jump off Sara Salom with her long term partner “Clear Concept”, flew around the course and gave the enthusiastic audience the first double clear which won the pair 5th place.  Once again Omer Karaevli (TUR), shone in this CSI3* GP class, and gave us the second jump off clear today, with the wonderful “Cheston de la Pomme d’Or Z”.  Last year here at the tour, this horse was ridden by the Diego Pérez Bilbao from Spain.  Next to jump on to the podium, was another Belgian rider, Dominique Hendrickx who flew in to the lead on “Kannabis Van de Bucxtale” looking unbeatable until Pénélope came in to jump, and he finally had to make do with third place.

Today’s GP was the first course designed for us here at the Tour by Uliano Vezzani, who has just returned from designing at the LGCT in Doha.  He told us “It was a good GP class, it was technical with two 1.60m jumps and long distances which allowed the horses to gallop”

Today, in the other Big Tour classes the theme of British wins continued.  Matthew Sampson with “Candy 763” was first in the 1.45m, whilst Harriet Nuttal and “Silver Lift” won the 1.30m.

The Medium Tour GP was well up to height at 1.45m. There were seven in the jump off from 53 competitors.  The Young Spanish rider from Galicia, Diego Ramos, was third behind the British rider Kayleigh Watts and the winner was Stephanie Andries from Belgium, riding the very fast mare “Javenia”.

Today was a great day of very high level, quality competition finishing off a busy week here at the XXV Sunshine Tour.