Jodie Hall Mcateer is queen of the Coca Cola Trophy 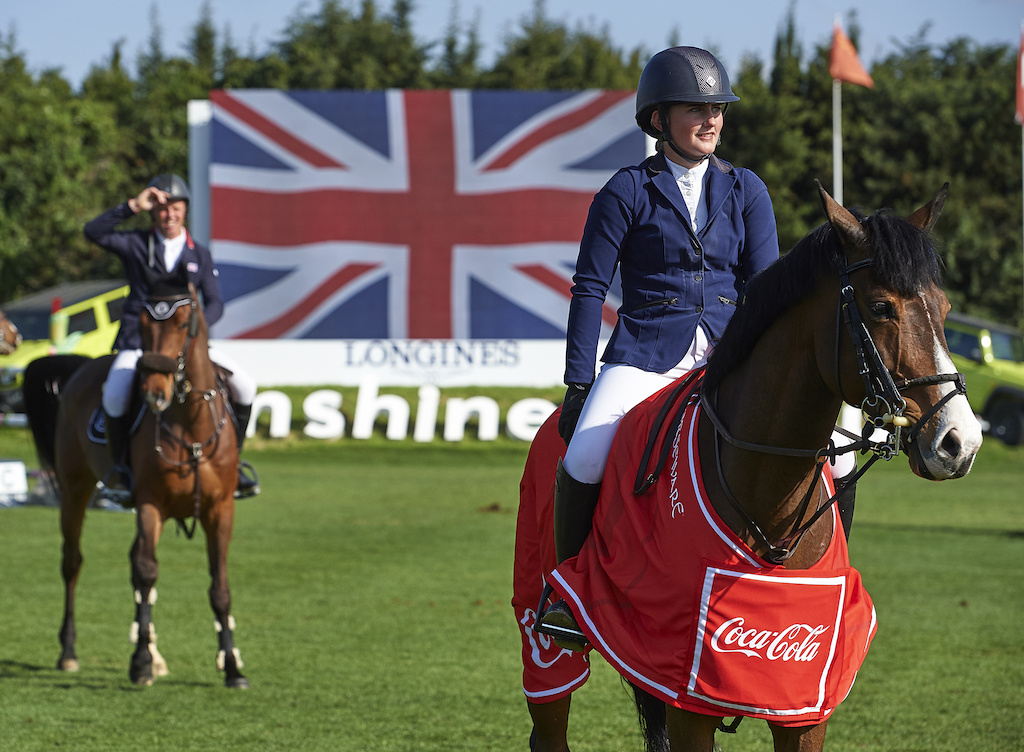 The young British rider, Jodie Mcateerwent all out to win the Coca Cola Trophy today.  And against 14 other competitors in the 1.45m, Big Tour C, jump off she, more than succeeded!

Jodie was 0.53s faster than the experienced Dutch rider who took second place.  Eric Van der Vleuten was riding “Djoost Again“ and stopped the clock in a very fast 36.54s which proved almost impossible to beat. However Jodie was last to go in the jump off and rode to win. At just 19 years old with her horse “Fantom” she stopped the clock in 36.01s. It was a brilliant round and not her only success today as she also won the Big Tour A1, 1.30m class riding “TJ Quincy”.

Third place in the Big Tour C class was also won by a British rider who has been extremely successful and regularly on the podium here at the Sunshine Tour, Matthew Sampson riding “Geneve R”.  Matt was also the winner of the 1.40m, B class, riding “Avalon du Carpont”, one of ‘Home Farm Equestrians’ horses.

The 1.35m class was won by the Brazilian rider, Carlos Eduardo Mota with the 13yr old “Brilexo”, this is the horse that he rode to win the first CSI3* here at the Tour.

The Medium Tour 1.30m class was sponsored by John Deere and was easily won by the Spanish rider Carlos López-Fanjul.  In this accumulator class, where each fence is more difficult, he rode the 12yr old KWPN “Cerano”. He was almost a second faster than Elisabeth Rose Lutener (GBR) who took second place riding “Caloro Ex Z”.

The Small Tour was also successful for British and Spanish riders.  The 1.05m was won by David Codina (ESP) with Kayleigh Watts (GBR) and Irene Santens in third and fourth place (BEL).  The 1.15m was won by Eleanor Hall Mcateer (GBR) riding“Unex Handyman”, followed by Max Wachman (IRE) and Olivia Álvarez (ESP).

Tomorrow we celebrate the four Invitational Grand Prix classes, that mark the last day of the 25th anniversary of the Sunshine Tour.