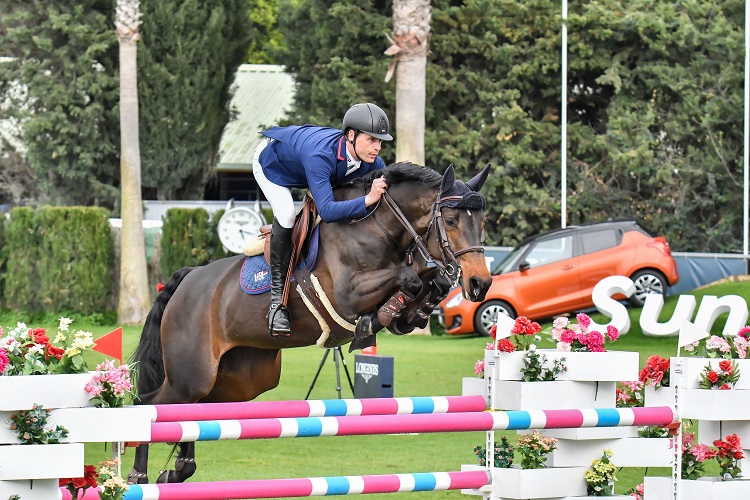 Leopold Van Asten is a well respected part of the showjumping world and was part of team that took fourth place, for the Netherlands, in the Athens Olympics  We are delighted to say that his results continue to stand out  here at the Andalucía Sunshine Tour 2022.  After today’s win he now has had wins in the Longines Ranking classes, so far, at the Tour.  Leopold has already won the Medium Tour 1.45 with ‘VDL Groep Urane de Talma’ last Friday and the Small GP on Saturday with ‘VDL Groep Falco’.

Today he won the qualifier class for Sunday’s Big Tour GP, this time riding the 15 year old mare, ‘VDL Groep Miss Untouchable’,  who is by Chacco-Blue, dam sire, Aldatus.  His second phase time was a mere 27.76s, which beat the then current leader’s time of 27.93s.  This was the time held by Kendra Brinkop (GER) who had been top of the leaderboard for most of the class with ‘Malissa de Muze’ (Vigo D’Arsouilles STX x For Pleasure

Danish rider Emil Hallundbaek was third with ‘Chalisco’;  fourth was Canadian rider Tim Wilks with ‘Diamanthella VG Z’ and in fifth was another Danish rider, Tina Lund with ‘Centina 10’.

The Big Tour 1.35m was made up of two sections due to high entry numbers. French rider Pierre Alain Mortier with ‘Astings du Busson’ had the fastest time and was first alongside Swedish rider Anna Skarberg with ‘Gravinissa SW’. Italian riders Davide Kainich with ‘Arian’ and Giulia Martinengo with ‘Jotage B’ took the two, second placings .  British rider Joseph Clayton with ‘Jenson QR’ and Dutch rider, Doron Kuipers with ‘Just a Moment Van’t Heerenhuys’ were third.

The Medium Tour 1.45m once again saw Doron Kuipers in the rosettes, this time with a win on ‘Isodermus PP’ (Kannan x Grannus).  Second was Norwegian rider Johan Sebastian Gulliksen with ‘Ambrosio D’Alcy’ and in third was the Belgian rider Dries Dekkers with ‘D&J Havanna’ who won last week’s class.  Giulia Mantinengo was once again in the rosettes, this time with, ’Scuderia 1918 Quick and Easy 3’ taking fourth place and in fifth place was Canadian rider,  Rebecca McGoldrick with ‘Horatio Van Erpekom’.

The Medium Tour 1.40, was also split in to two sections.  The winners were German rider Katharina Offel with ‘Elien’ (Carambole x Mermus R), with the exact same result as last week in this class, and British rider, Adam Botham with ‘Ebanking’ (Etoulon x VDL Sheraton) another combination that have had excellent results here so far, with both a second and first placing in the second week of the Tour.

In second were Dutch rider, Michael Greeve with ‘High Big And I K’ and Irish rider Eoin Gallagher with ‘I love you M’.  Italian rider ’Luca Moneta with ‘Chilli 41’ and well known  British rider,  Ellen Whitaker with ‘Spacecake’, took the two, third placings.

The Medium Tour 1.30m was also split as it had 112 entires.  British rider Samed El Dahan with ‘WKD Spice’ and Swedish rider Marcus Westergren with ‘Fellaini de Liebri Z’ were the winners.

In second were the legendary French rider Nicolas Bost (Bosty) with ‘Castleforbes Darcy’ and British rider Laura Johnson with ‘Creevyquinn Pearl’.  In third were German rider Lea-Sophia Gut with ‘Con Calma’ and the Italian rider Lavinia Lo Bosco with ‘Ocean’.

Competition continues tomorrow with 12 classes, including two FEI Longines Ranking classes: The Trofeo Catunambú set at 1.50m in the David Broome main arena and the Medium Tour 1.45m which will be held in the Milton Arena.  This is the third week of the Andalucía Sunshine Tour, which is kindly sponsored by the Consejería de Turismo, Regeneración, Justicia y Administración Local de la Junta de Andalucía, and this week  there will be more than 310,000 euros of prize money handed out!