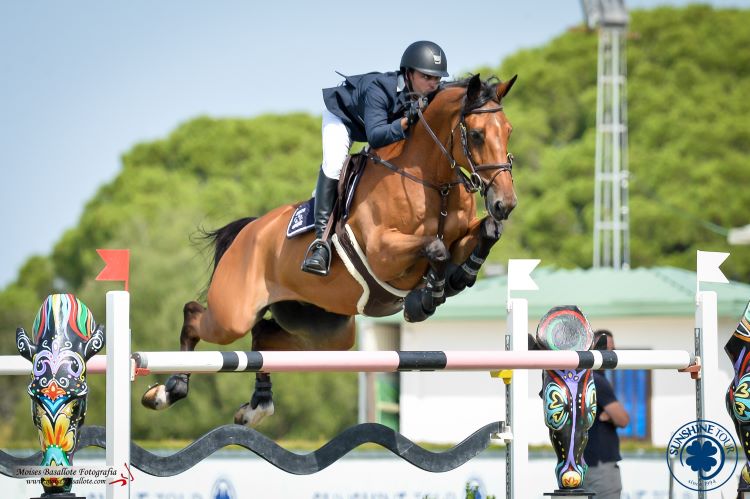 The Uruguayan rider, Marcelo Chirico with the Baloubet de Rouet bred, QH Baloudarc LF (Dam sire; Nonstop) were unbeatable in the GP today; a Longines Ranking class and qualifier for the 2021 Tokyo Olympics.  The top four riders all finished in just over 39 seconds.  The winner’s time was a mere 39.21sec and they went early on in the jump off, setting a solid challenge to those that followed.  Despite many a brave attempt, no combination managed to beat this time with a clear round.  This class was the highlight of the week’s jumping here at Montenmedio and there were 42 entries.  The class was held on grass in the David Broome arena with the course designed by the 4* designer, Javier Trenor.

John Whitaker (GB) who is a legend in showjumping also had a super round today taking 4th place in just 0.07 of a second behind the Irish rider.  He was riding Unick Du Francport who is by Zandor and out of a Helio de la Cour II mare.

There were four other classes today.

Spanish rider Laura Roquet with Sandi Puigroq, were the winners of the 1.40m, held in the Milton arena.  Second was the Portuguese rider Luis Sabino Gonçalvez with Biloba des Chanes and third was the German rider David Will on Never Walk Alone.

There was another Spanish win in the 1.35m, Medium Class A, from Jesús Garmendia and Llain de Llamosas.  This was a two phase class held on grass. and this pair finished on 21.33sec beating the American rider Julie Welles, who has already been in the top three in this class three times this Tour and now has been second twice this week all with Charming Fellow Z. The Spanish rider Ainhoa Manero was third with Bellefleur PS Z.

In the Small Classes, the 1.25m B was won by the Swedish rider Linda Heed on Heart to Heart.  Second was the Spanish rider Nazaret Santamaría with My Kiss Tiji St and third was the American rider Taylor Alexander with Billy Nala.  In the 1.10m A there was a British win for Daniella Stapleton riding Classic Touch V. Cornelia Bordier from Sweden riding Ibesi Cooper took second place and the Venezuelan rider Maia Velasco on Ilona Ven T Palmenhof was third.

These results finish off the second week of jumping here at Montenmedio’s Autumn Tour. Riders and horses will now have a break and the third week of competition will begin here at the Sunshine Tour installations on the 30th of Septemeber.