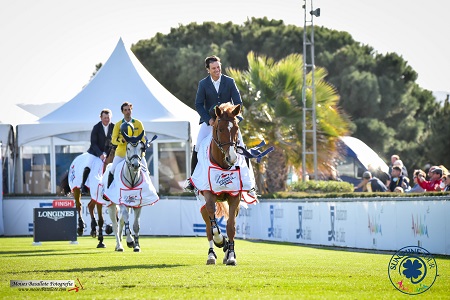 The top two on the podium are Brazilian Olympic riders, with Yuri Mansur taking second place riding ‘Humberto Ask’ in the third week here at the Andalucía Sunshine Tour

In this very demanding Equine America Grand Prix, from an initial field of 48, just five riders got through to the jump off with clear rounds and the next five places were taken by riders that finished with time penalties.  The course was set at 1.55 and designed by Grégory Bodo and Alain Lhopital.

The top two places on the podium  In the Equine America GP, were taken by Brazilian riders. Our winner with a very fast clear, was the very last to go and knocked his compatriot off of the top spot in an exciting finish to the class; stopping the clock in a time of was 38.91s.  Pedro Veniss, is no stranger to the arenas here at the Andalucía Sunshine Tour and was extremely happy with both jumping rounds from the gelding, ‘Nimrod De Muse Z’ by ‘Nabab de Reve’, dam sire, ‘Tinka’s Boy’  This three time Olympian is a very well respected international rider, having also competed in three World Equestrian Games and two Nations Cup Finals in Barcelona.  We are delighted to have him here at the Tour, he told us that ;  ’Nimrod De Muse Z’    “ jumped incredibly well and I am really happy to win my first 4* Grand Prix class with this horse here today.   None of this would be possible without my team”.

In second place in 39.67s was another rider who is a regular here, and extremely well respected all over the world, Yuri Mansur.  With two Olympics in his belt, Tryon World Equestrian games and too many other achievements to mention here;  he is a steady part of the Brazilian and International equestrian scene. Today he was riding one of his top horses, 'Humberto Ask’ a beautiful grey, Belgian warmblood stallion by the amazing sire ‘Cornet Obolensky’, ds Lazio and owned by Stutteri Ask stud farm in Demark.

In third was the Irish rider Cameron Hanley, who was the only other rider to go clear in the jump off of this Equine America GP. This international rider has competed in 2 World Equestrian games and Nations Cup rounds, to mention just few of his records.  Today he rode a really beautiful round with his own ‘Esi Toulouse’ (Siec Livello x Quasimodo Van de Molendreef) really showing off his experience, and finished the course in 40.21s for a well deserved third place.

Leopold Van Asten (NED) was the hot favourite to win in the stands today and indeed he was fast!  He stopped the clock in the fastest time of the day, a mere 36.43s but he had a pole which dropped him down to fourth place.  Today he was riding  ‘VDL Groep Miss Untouchable’ (Chacco Blue x Aldatus) in this class, but he did win the Big Tour 145 class earlier on with ‘Nino Du Roton’ and was third in the Medium Tour 1.40 with ‘VDL Groep Victoria’.  He has had many wins here at the Sunshine Tour over these weeks, with various different horses, showing that this Olympic rider, has a very strong stable ready to start off the season.

First to go in the class and the jump off was French rider, Pierre Alain Mortier, with his own (Natelsol Horses Team), chestnut gelding, ‘Just Do t R’ who is by ‘Action Breaker, dam sire, ‘Baloubet de Rouet’.  This pair jumped the first round so beautifully that it appeared there might be a lot of clears in this very demanding 1.55 Equine America GP but indeed his round looked deceptively easy and this wasn’t to be so.  He rode the jump off round fast and neatly, but sadly had a fence down, which in the end placed him in fifth.

Equine America are a well known and highly respected supplement company dedicated to caring for horses and to clean sport.  Their aim is to provide products that maintain health and allow for maximum performance in your equine partners.  Their most popular products are Cortaflex (Ha) and they also make a human Cortaflex supplement used by John Whitaker.  Other products with great reviews are their Buteless range, and they also make great shampoos and fly sprays.  Their Head of Sales in Europe is Perry Colegate, who runs the stand here at the Tour and can answer any queries you may have and who gave the prizes to the winners of the class today. Thank you for your sponsorship.

The Medium Tour, GP was won by legendary French Olympic rider,  ‘Bosty’,  Roger Yves Bost with ‘Ballerine du Vilpion’ (Baloubet du Rouet x Quidam de Revel).  He beat off 18 other riders in the jump off of this 1.50 GP Ranking class, stopping the clock a mere  0.10 of a second faster than the Danish rider, Emil Hallundbaek with ‘High Nitro’.  In third was a British rider,  Sameh El Dahan with ‘Wicked Enigma’.

In the Small Grand Prix  we had a Swedish winner, Alexander Zetterman who in the jump off, had the only time under 40s with ‘Triton Hastak’.  In second was German rider, Karin Ernsting with ‘D-Coroquada I’ and in third was Belgian rider Celine Couvreur con ‘Dubai Une Prince’.

These three GP classes were all Longines Ranking classes for the FEI.

Other winners today were as mentioned above, Leopold Van Asten with‘VDL Groep Nino du Roton’ in the Big Tour 1.45; Polish rider, Bartosz Adamus with ‘Sire One’ in the  Big Tour 1.35; Irish rider, Jessica Burke with ‘Inpulss’ in the Medium Tour 1.40; Joseph Clayton (GBR) with ‘Unex Arantos’ in the Medium Tour 1.30; Jone Illi (FIN) with ‘Eolita L’ in the Small Tour 1.35and Belgian rider Eleonore Lambilliotte with ‘Hotcha Van’t Rozendael’  in the Small Tour 1.30.  Well done to all.

Next week we start jumping on Thursday with the Young Horse classes and they jump until Saturday.  Thursday is also the start of a CSI 2* which continues until Sunday.