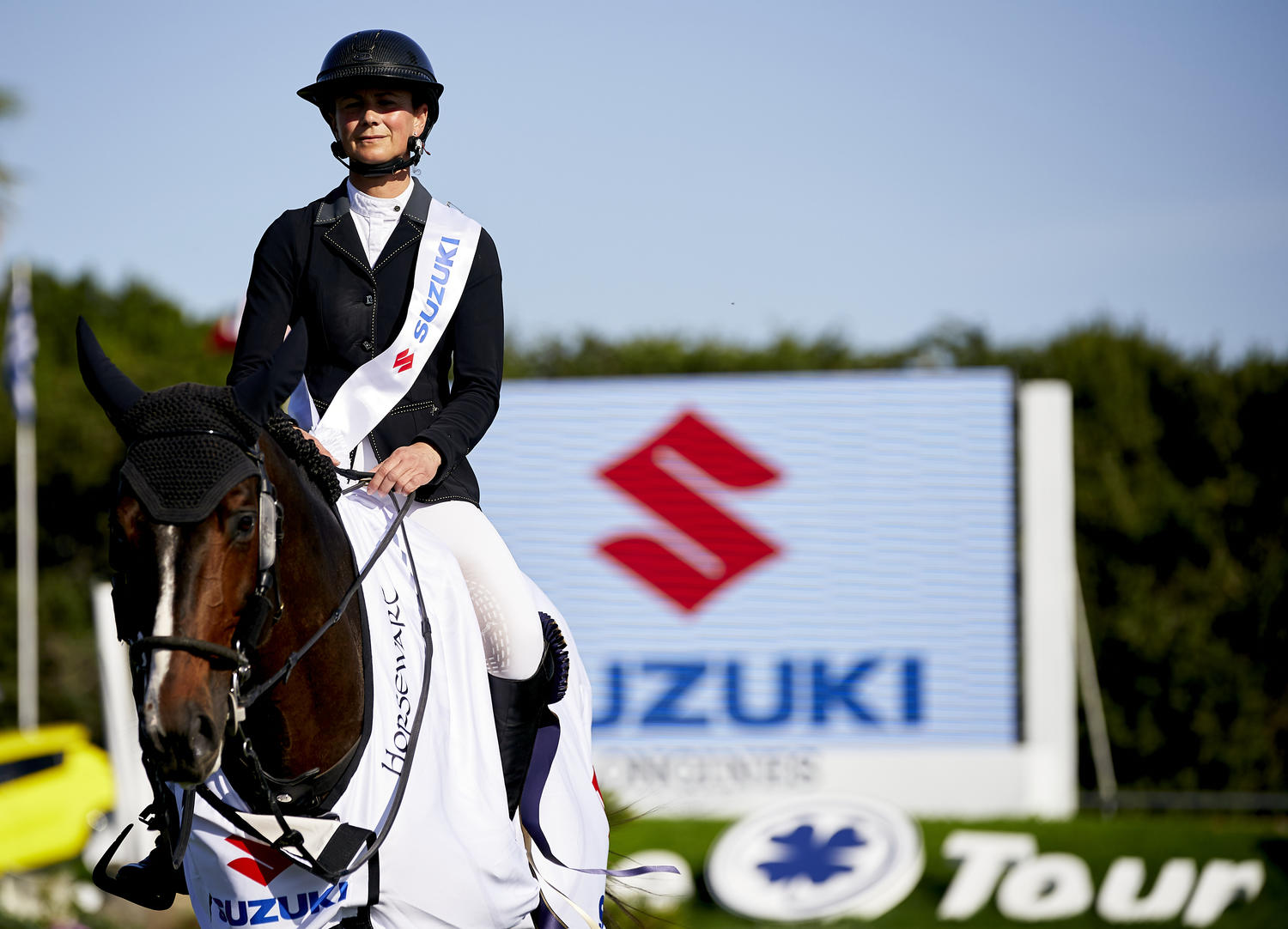 Jason Foley and Andrzej Oplatek take home a lot of rosettes between them!

It’s the last day of the XXVI Sunshine Tour and it sure lived up to its name. The very difficult situation that we are facing with the Corvid-19 pandemic, has led to the early closure of the Tour this year in order to protect the riders and everyone involved in this event. Yesterday we announced that this would be our last day of jumping, an unprecedented event in over 25 years of competitions here.

At the very least both riders and horses have had a great day today enjoying the wonderful competition facilities. Over the course of the day there were numerous classes including the Grand Prix class sponsored by Suzuki. The French anthem sounded out for our winner the Olympic rider Penélope Leprevost and her marvellous horse“Vancouver de Lanlore” with the fastest jump-off time of 39.91sec. There were 17 riders through to the jump off and in second place was Guido Klatte with “Qinghai”. Guido really has had an excellent Tour this year and deserved this placing after a superb round. Third was the Brazilian rider Stephan Barcha with “Artois D’Avillon”. This rider was part of his home team in the Rio de Janeiro Olympics.

The amazing young Irish rider, Jason Foley was once again at the top of the podium in the 1.45m class sponsored by Marqués de Riscal. This time he was riding the lovely grey, “Castlefield Vegas”. This class had a large number in the jump off with 24 of the 90 entrants going through. The course was designed by Marcos Nuñez in the expansive grass arena, Hicksted. Jason beat the Polish rider Andrzej Oplatek by a few hundredths of a second. Andrzej was riding “Stakkatan” who was born and raised in the stables of the renown Paul Schockemöhle. This was not his only good result today here at Montenmedio. The British rider, Charlie Jones took third place.

Jason Foley was also amongst the top three in the Big Tour B riding “Castlefield Cass”. He came in second, just behind the Canadian rider , Kara Chad the winner of the class with “Firefly W”. Third was the Spanish rider Kevin González de Zárate. He also took third place riding “Ragga Muffin” in the 1.35m Big Tour class. The winner of this class was the Brazilian rider Carlos Eduardo Mota Ribas riding “Kartouzo Van’T Kathof”. Second place was taken by the Italian rider Michael Cristofoletti with “Udsturm du Lys”.

The Big Tour 1.30m class was small with only 12 riders but it was a competitive class and was won by Jude Burgess and “Ivascalle” with Juan Carlos Pérez Resendi and Tim Wilks taking second and third resp’.

There was only one clear round from 65 entries in the Medium Tour 1.45m. This was from the German rider Holger Wenz with the 9yr old KWPN “Yoshimi”. The 27yr old Latvian rider, años Santa Steinberga was second with one time fault and in third was Jennifer Kuehle and “Arlo de Blondel”.

Another of our regular winners here at the Sunshine Tour is Matthew Sampson and he finished off his time here by winning the 1.35m class riding “Holisca” an 8yr old mare previously ridden by Carolina Aresu. Andrzej Oplatek was second with “Odile du Soufflet”.

The Coca Cola sponsored class was won by none other than Jason Foley. The 19yr old left the spectators speechless with his amazing time of 60.66 sec. He was 5secs faster than the rider placed in second, Carmen García Torres, with “Cybelle de la Lande” and Andrzej was third!

The 1.20m also had a Spanish flavour with Ana Fernández de Velasco winning and Juan Miguel Febrer,Santiago Nevado taking the other two top spots. The 1.05-1.10m was won by the Belgian rider Charlotte Van Keer, second was Kateryna Khurshudyan from the Ukraine and third was the British rider, Ethan Bracken.

And so we end this edition of the Tour, with record numbers of participants and over 2,500 horses competing. We would like to thank everyone involved for all their hard work and happy faces and wish them all a very safe trip home.