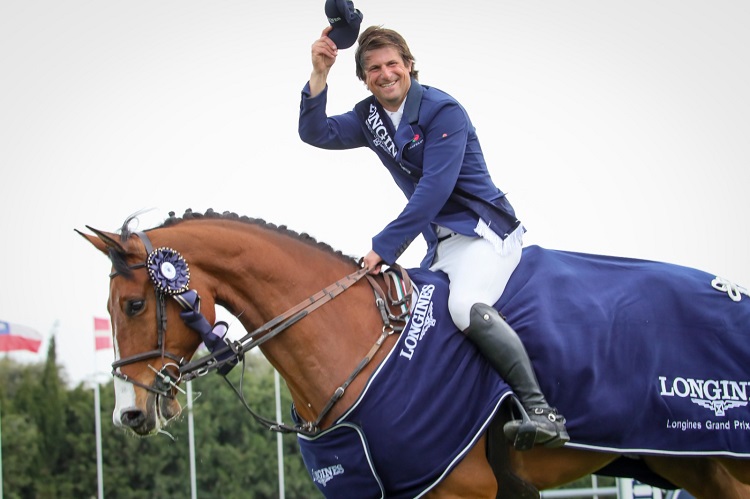 Enrique Camiruaga Rueda and ‘Vintage’ win this prestigious 1.60 class at the Andalucía Sunshine Tour 2022 with the only clear round in the class!

“A lifelong dream’ was the way that Enrique Camiruaga Rueda, described his impressive win in the Invitational GP class.  He rode a carefully crafted clear round over this beautifully designed course,  taking the top of the podium as the only rider who didn’t touch a pole, despite there being 50 of the best competitors here at the Tour, all vying for a top placing.  His wonderful 11yr old horse, ‘Vintage’, is by ‘Verdi TN’, and is owned by Ramón Tomas Bayo.  The course designer today was Uliano Vezzani and he told us that his aim was to create a course that the horses would finish ‘happily’ with confidence, as they left the arena  “I like it when the horses finish and you see them calm and ‘smiling’”.

It was a very exciting course with some lovely lines, especially an open water jump to a double and a testing last line that passed in front of the crowds, who were watching and willing the riders clear over every fence.

After being happily covered in champagne and ceremoniously dunked in the water jump by all his friends, Enrique told us that: “It was a course without a breather,  it was a very beautiful course, but very technical and asked that both rider and horse gave it their complete concentration and best effort.”  From the very first fence he realised that Vintage was going really well and felt very comfortable in the arena.  “The horse did an excellent job and I am really satisfied and extremely proud of him,  but the most wonderful part of this win, was how the crowd reacted and were so happy for me”.  This is absolutely true, as the cheers as he flew over each fence were heard across the showgound and when he passed through the finish line everyone was delighted!  We also asked Enrique about his plans for the year and he told us that apart from competing at this height and continuing to develop the horse, he has a dream to be on the National Spanish team.  A dream that we believe is one step nearer after this win here today.  And so, the Spanish anthem rang out across the Montenmedio a fitting finish to a wonderful Tour here at Montenmedio and something that hasn’t happened here since, 1999 when Fernando Sarasola won the Invitational with ‘Ennio’.  Not only that,  Enrique Sarasola, Fernando’s brother, was the very first winner of this GP in 1995 with ‘Minstrel’,  making Enrique Camiruaga the third ever Spanish winner of the Invitational GP of the Andalucía Sunshine Tour.

In second place was another super Spanish rider, who had the fastest four faults out of the 12 riders on that score, Santiago Núñez Riva who was riding the wonderful ‘Valentino de Hus Z’ (Vivaldi du Seigneur x Trophee du Rozel)  and who stopped the clock in 74.27s.  James Wilson From Great Britain, took a well deserved third place on ‘Imagine de Muze’ (Nabab de Reve x Chin Chin) and once again his compatriot, Holly Smith was in the rosettes in fourth, with the lovely ‘Fruselli’ (Zambesi TN x Karandasj). This pair were the winners of the BT 1.50 class on the 17th of this month and Holly has  had numerous second places here, including in the 1.55 Suzuki GP on the 20th.  Holly is one of our top riders at the Andalucía Sunshine Tour,  and goes home with great results from all of her horses .  In fifth place it was wonderful to see Marie Longem who is from Norway, and who was riding ‘Echo de Virton’ (Vagabond de la Pomme x Grignoteur de la Fontainte).  Squeezing into sixth was Ellen Whitaker (GBR) with Spacecake, one of our other top winners here at the Tour.  Pedro Veniss, (BRA)  the winner of the Invitational Medium Tour GP today, was seventh with ‘Nimrod de Muze Z’ and we cannot finish without mentioning Penélope Leprevost (FRA) who was the very last rider to go in the class, and jumped a spectacular clear up to the very last fence where she just clipped a pole, with the crowd gasping at each jump and a big sigh at the end she really gave us a fabulous performance and in the end she finished in eigth place with ‘GFE Excalibur de la Tour Vidal’.

The Prizes were given out by Verónica Sánchez Serrano, who is the Marketing Director of Longines here in Spain.  This famous company has been in charge of all the timing here at the Tour and has enabled us to accurately score almost 400 classes over the seven weeks.  Enrique also received a beautiful Longines ‘Master Collection’ watch.

After the class our designer, Uliano Vezanni, who is responsible for many of the world class courses in showjumping and designs for the Longines Global Champion Tour, told us he was very satisfied with the way the class went and said that he believes the ‘David Broome’ grass arena to be “the best arena in the world” and believes that all of the arenas, especially the grass ones, are of a “superior quality”.  He is a great fan of the Andalucía Sunshine Tour, and the competition here and especially likes the way that the installations are designed for the comfort of the horses.  “The horses today jumped magnificently and the class really was an authentic spectacle”.  For Uliano, the design details are paramount and he is very meticulous and creative, paying attention to the smallest things believing that these details are “what make the difference”.

As we mentioned above another brilliant winner today was the Brazilian superstar,  Pedro Veniss who rode his 13yr old ‘Boeckmanns Lord Pezi Junior’ (Böckmann’s Lord Pezi x Quattro 7) to win in the Invitational Medium Tour.  This class was held in many people’s favourite grass arena, Hickstead.  The class was set at 1.50 and there were 12 riders through to the jump off.  Pedro stopped the clock in 39.97s and just behind him in 40.26s, was the the German rider,  Laura Klaphake with ‘Davenport VDL’ (Diamant de Semilly x Indoctro);  Laura was also winner of our Ladies Invitational Tour later in the day, with a superb round on ‘Concollon PS’ (Conthargos x Chacco Blue), and  the winner of a beautiful saddle from the class sponsors, Sellerie Equipe.

After Laura, in the Medium Tour, there was a Spanish Olympic rider in third, Eduardo Álvarez Aznar with  ‘Full Option Van’t Zand’ and in fourth was Karl Robins (GBR) with ‘Equine America G Camille HBF’.

Back to the Ladies Invitational, a very competitive class, and coming in behind Laura was Maria Louise Kingsrod (NOR) with ‘Metaquoia’, followed by Ainhoa Manero Benavente (ESP) with ‘Bellefleur PS Z’.

The Invitational Small Tour was won by Mariana Frauches (BRA) with ‘Emeritte’ who has come second twice in this Small GP class already this Tour;  second was Ibone Ibáñez Aldecoa (ESP) with  ‘Bambino D’Assemont’ and in third was Ivan Dalton (IRL) with ‘Ex Ranger HH Z’.

The CSI1*,had a Spanish top three and our winner on her impressive grey stallion ‘Cartouche’, was Olivia Álvarez García who flew over the last oxer with acres to spare and finished nearly a second in front of Rafa Iribarren with ‘Destiny’, followed by  Ana Gómez Román with ‘Crazy Love’.

And here we end the 28th edition of the Sunshine Tour, with record numbers of competitors, 950 riders, 3,300 horse from 60 countries and with 2.3 millions of euros in prize money.  We hope you enjoyed the show and look forward to seeing you all again next year!  The Andalucía Sunshine Tour, is sponsored by the Consejería de Turismo, Regeneración, Justicia y Administración Local de la Junta de Andalucía, a través de Turismo y Deporte de Andalucía.