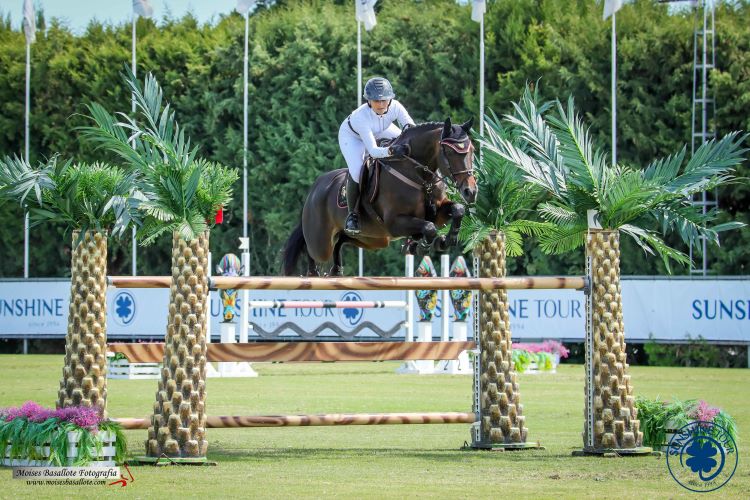 On another a hot and sunny day here in Andalucia the 1.45m Big Tour Class B was held in the main grass arena with 34 combinations competing to take the top spot and add to their Longines Ranking points.  This was a big speed class and the course was extremely testing.  The Spanish rider, Eduardo Álvarez Aznar was eighth to go which was relatively early on in the class, and rode an extremely neat and fast clear that showed off the ringcraft and talent of both horse and rider. HIs horse, Seringat (Chef Rouge (DE) HN / Guillaume Tell) and Eduardo finished in 63 seconds dead; which at the time seemed as if it would be hard to beat and proved to be as combination after combination tried, and fell short.  When the German rider Nicola Pohl, entered the ring late on in the class, it was clear that she meant business.  Riding the mare Baronescha, by Verdi with the DS by the famous Dutch stallion Concorde, she stopped the clock in 62.04 seconds and flew in to first place.  The American rider Julie Welles, who had a very successful day today, also jumped a very neat, fast clear round that placed her and Undercover (Luidam / Le Tot de Semilly) in to third place with a time of 66.06 seconds.

Kayleigh Watts (GB) with her fast gelding, Harley, were the winners of the 1.30m Medium Class that took place in the Milton arena.  Taking second place, Julie Welles had another successful ride with Charming Fellow Z.  In third was the Spanish rider Kevin González de Zarate riding Courage.

The Spanish rider, Alejandro Álvarez and Califa SQ was the winner of the Small Class, B, with two British riders taking second and third.  Olivia Howe with Black Label followed by Daniella Stapleton and Classic Touch V.

The Small class C was won by Ariana Rockefeller and Chaccadella, with Juan Miguel Febrer and Grantender taking second and the Swedish rider, Cornelia Bordier on Ibesi Cooper taking third.

The 6yr old class was won by the British rider Olivia Skinner on Jobijn by Everdale, and she also took 5th place with Costa del Sol B Z.  Spanish rider Kevin González de Zarate was second on Jabulani owned by Alejandro Fernandez Sanchez and David Will was once again on the podium with Junior Kannan who’s sire is clearly noted in the latter part of this lovely stallion’s name!

The 5yr old class was won by the Spanish rider, Antonio Mariñas with Kingston Express, second place was taken by the British rider Charlotte Geddes on Celeste RBF Z and finally, in third, was the Swedish rider Linda Heed and De Vil T.

That is the summary of the second day of jumping here at the Autumn Sunshine Tour. Jumping continues tomorrow and on Sunday. Tomorrow there are eight classes and jumping across the board in Young Horses, Small Medium and Big Tour sections.

This whole event is transmitted live both on our web site www.sunshinetour.net and on www.clipmyhorse.com. The Sunshine Tour App is totally free and can also be used to watch livestreaming and to look at all the details of the riders, the horses, entries, class schedules and the results. You may also watch individual videos of each rider/horse’s round.