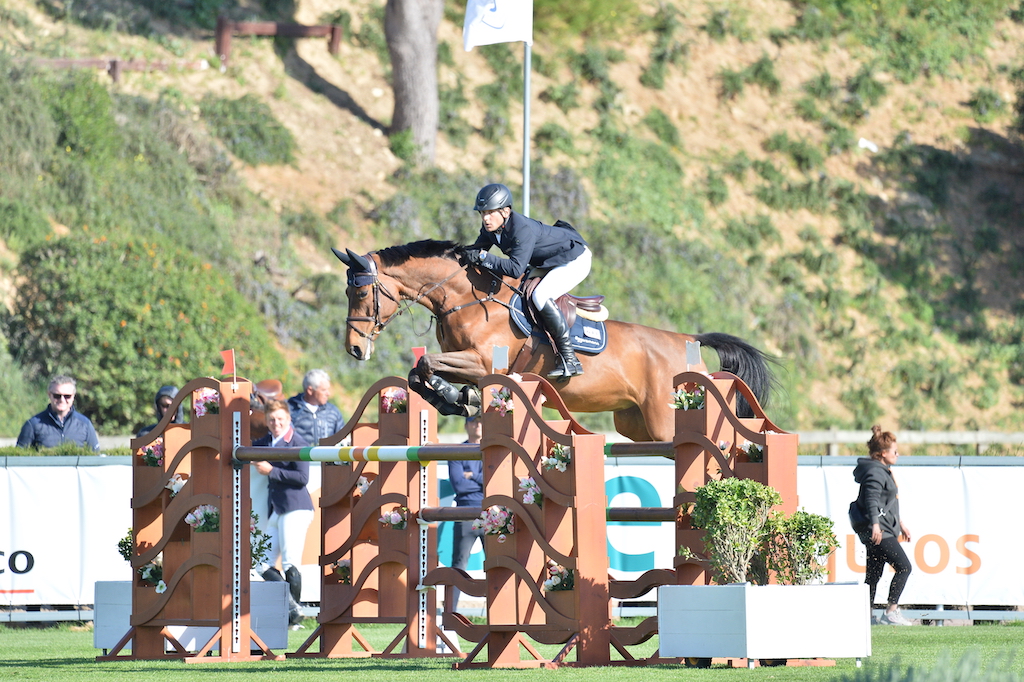 Today was the 5, 6 and 7yr old Finals of this 25th Sunshine Tour

Today was the 5, 6 and 7yr old Finals of this 25th Sunshine Tour

The 7yr old final was won by the KWPN mare “Hardessa”, by “Berlin”,  ridden for Germany by Torben Köhlbrandt.  They won the 5 horse jump off by well over a second from the American rider Julie Welles and “Crocus la Sillardiere”. In third place was the British rider, David McPherson on “Carl-Heinz B” by “Chacco Blue”.

The audience watching the 6yr old Final were treated to a very exciting and fast jump off. Early to go was a Spanish rider, Carlos Bosch riding “Concertino de Mies”and they really went for the win.  Despite other riders chasing their time of 32.56s, no one could catch them. It wasn’t until the Turkish Rider, so successful here at the Tour, Omer Karaevli came into the arena on the very fast mare “Just Call Me May”, that he was pushed off of the top spot in to second place.  Omer was 0.30 seconds faster and ended up winning the class with this mare, that he only started riding last October.  The Sunshine Tour has been their first outdoor competition and their results over the last six weeks, couldn’t have been better.  The Spanish rider Marcos Díaz, riding “Cobalt Coco” took third place.

The British 5yr olds stole the show today taking both first and second places.  Matthew Sampson took the win riding HE Sports Horses Ltd’s, “Lady Angeles” by “Los Angeles”, he was over a second faster than Charlie Jones riding “Jacquard” by the famous stallion “Kannan”.  Third place was taken by the Swedish rider Sara Molvidson-Hellström with “Ginger Ale” by “Mylord Carthago*HN”. There were 38 competitors in this class.

Tomorrow we begin the last CSI4* of this Tour with 11 classes including the 1.50m, Big Tour D, a Longines Ranking FEI class.