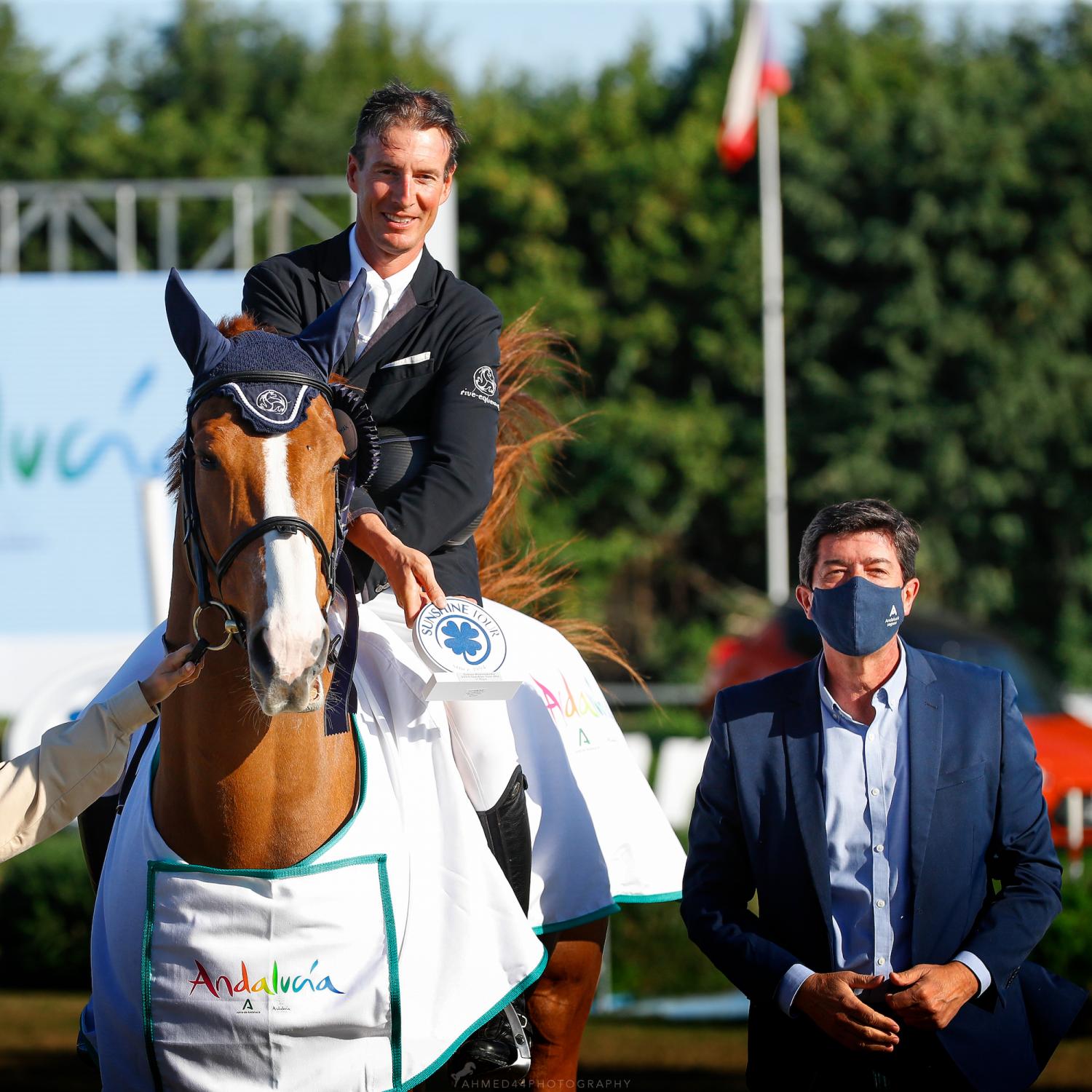 On Thursday the 28th of October we are back with the last week of competition here. This will include a Nations Cup round, the Victoria Trophy, with 19 teams taking place! On Sunday to top off the week, will be the Suzuki Grand Prix.

60 riders took part in the most important class of the week here at Montenmedio, all aiming to win the Grand Prix class which was kindly sponsored by the ‘Junta de Andalucia’.

There were many top international riders and horses in this 1.50m GP class including four time Olympian Ludo Philippaerts; team Silver winner in the Tokyo Olympics this year, Laura Kraut and the winner of the Pan-American games in and yesterday’s winner in the biggest class, Felipe Amaral. Yet despite the quality of the field only eight pairs actually got through to the jump off.  The last line of fences in the first round was the downfall of many riders, with an oxer, sponsored by Marqués de Riscal, followed by an upright sponsored by the Junta de Andalucia.

In the jump off Peter Burri (SUI),  riding Dubai 64 jumped a lovely steady clear but left the door ajar with his time of 47.42s looking possible to beat.  It was clear the competition wasn’t over when his compatriot came in to the arena,  Alain Jufer who rode a fast, subtle but strong round in his usual, distinctive style.  Alain told us afterwards: “ I knew I needed a fast clear round”, and in the end, that’s exactly what he achieved, a fast clear in just 44.08 s, the new time to beat.

Today Alain was once again riding Cornet MM,  he told us that is wasn’t his plan to jump the horse again, but he so comfortably, winning the class on Friday that  “Steve Guerdat, who I train with, and I decided we would jump him in the Grand Prix of Andalucía. He is a fast horse but in reality it is Dante MM who we have high hopes for in the big classes next season”.

There were five riders to go after Alain’s round, and all of them were both experienced and fast. One of them was Ludo Philippaerts with Laurier, a 10yr old KWPN, by Zirocco Blue, who has a great stride length.  This pair really looked like they were going into the lead as they flew round and finished on a mere 42.18s but their speed cost them a pole at the very last fence.

The next pair in the arena were the winners of the La Equina Trophy class from yesterday, Felipe Amaral riding Androide 3K.  This pair was also hungry for another victory but once again their speed caught them out and they took down the second part of the double. In the end they finished in a time of 42.91s so it was clear the current leaders’ time was beatable, but could it be done with a clear round.  With just two riders to go Alain was definitely in third place.  It was all up to the last riders, Edouard Schmitz was riding Gamin Van’t Naastveldhof and was faster but he took down the Suzuki sponsored vertical.  Last to go was Laura Kraut and Constable II who was a bit slower and also had a rail in the last line of fences.

A new name for us here at the Tour is the American rider Zazou Hoffman who was was very impressive today and took second place.  She jumped a neat fast round with Bloom du Plessis, stopping the clock in 44.95s.  The mare is by Orient Express and the dam sire is Rosire.  These two have jumped here this week in a 1.45m and a 1.40m class with clears in both and today they were really ready to step up on the podium.  It was a very exciting jump off with these amazing athletes really riding to win.

So, in the end, the winners of the CSI3* Grand Prix of Andalucia were handed their prizes by the Vicepresident of the Junta de Andalucía,  Don Juan Marín. The winner was the amazing Alain Jufer with Cornet MM, in second was American rider Zazou Hoffman with Bloom du Plessis owned by the Bloom Group and in third place was Peter Burri  with the lovely Dubai 64.

We really cannot finish off this week without mentioning Regis Villain who is on fire.  Once again he won the 1.40m Big Class riding Berline Cece and this time it was by more than two seconds.  With this victory this Israeli rider has now four wins under his belt and a few other top placings as well.  This Tour is clearly a very successful one for both him and the 10yr old mare who is a French riding horse, Berline Cece.  She is by Ustinov with the dam sire Quouglof Rouge and is owned by the Écurie de la Pointe, the stables where Regis has been based since 2020.

In the 1.35m Medium Class the Indian rider Maryk Sahney took the win today with Devil VD TO JO PE Hoeve. Maryk is based in Normandy and today he had his first victory after already being very close on numerous occasions.  Devil VD TO JO PE Hoeve is a 13yr old KWPN who was with the Spanish rider a Alberto Márquez Galobardes, and passed to Maryk in 2018.

There were new Young Horses topping the podium today with Higgins, winning the 6yr old class.  This chestnut has already jumped clear 15 times in 18 outings in International competition and is ridden by a regular face here at the Tour Antonia Andersson.  Today was their first International victory together and it is clear there will be many more to come.

The 7yr old winners were the Czech rider Malgorzata Ciszek-Lewicka with Daysi who is by Glasgow-W Van Het Merelsnest with the dam sire Canturano. These two have jumped 23 times on the international circuit and have come in clear 18 times, another lovely young horse to look out for next season.

And so we end the CSI3* of this II October Tour.  We have had a great week watching some of the biggest names in our sport taking to the arenas and enthralling the audiences.  The show ground has once again lived up to expectations and easily supported all the horses, riders and spectators, there is a great atmosphere as usual and it is easy to see why everyone is comfortable at the best equestrian installations in Europe.