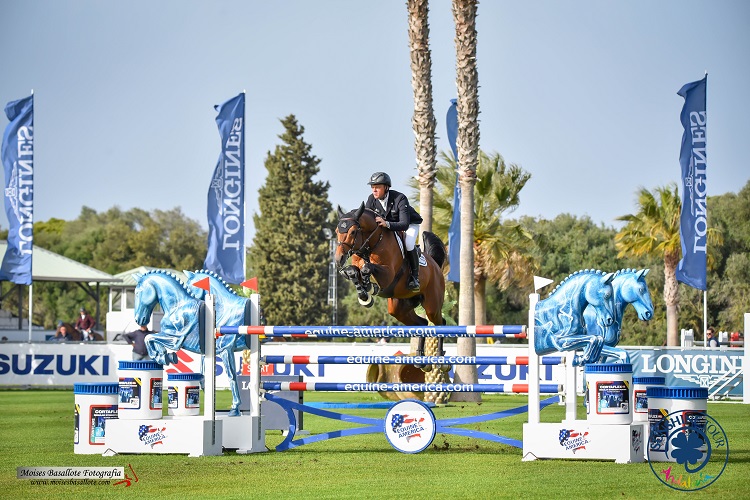 Once again the Dutch rider, Willem Greve is up at the top of the leaderboard here in the third week of the Andalucía Sunshine Tour, this time not with his lovely Young Horses but in the biggest class of the day, the Catunambú Trophy, with ‘Highway M TN’ (Eldorado VD Zeshoek x Black Walter).  This Big Tour class was a FEI Longines Ranking class, set at 1.50, and a speed class.  There were only 13 horses with clear rounds in this demanding class in the main David Broome arena, course designed by Grégory Bodoand and Alain Lhopital.  Willem ’s round was boldly ridden in a steady forward rhythm and he took the option of a narrower upright fence, at Number 5, which allowed a faster turn to the oxer at number 6.  He took the win from Ellen Whitaker by stopping the clock in 64.01s beating her time by over two and a half seconds.

Ellen Whitaker was riding ‘Spacecake’ today in this class and she also took the shorter route at fence 5.  Ellen rode a very stylish but slightly more careful round, steadying a little for the uprights.  Her time was 66.61s and she took a well deserved second place.  Ellen is certainly doing well this week with this lovely mare by Stakkatol, dam sire Kannan, as yesterday they were third in the Medium Tour class.  Today Ellen was also the winner of the other Ranking class, the Medium Tour 1.45, with ‘Fiona des Hayettes’ (Lord Des Hayettes x Ryon D’Anzex).

The rest of the results for the Catunambú Trophy, were;  Camaron Hanley in third with a time of almost exactly 2 seconds slower than Ellen; and  he was riding ‘ESI Toulouse’;  fourth was Swiss rider, Thibaut Keller with ‘Arley de Vayrie’ and in fifth was Brazilian rider, Yuri Mansur with ‘Humberto ASK’.

The rest of the results for the 1.45 Medium Tour Ranking class were as follows;  in second place was the Italian rider Giulia Martinengo who had a very fast round but who couldn’t match the amazingly tight left turn, that Ellen and ‘Fiona des Hayettes’ took from fences three to four.  Giulia  was riding ‘Scuderia 1918 Quick and Easy 3’ a 10yr old mare with whom she was also fourth yesterday in the Medium Tour 1.45 class.  Tim Gredley (GBR) rode ‘Jimmy Mack V Berkenbroeck’ into third place;  Karim El Zoghby (EGY) was fourth with ‘Zandigo’ and Swedish rider Douglas Lindelöw took fifth with ‘Eldoret PS’.

Big Tour 1.45, 2 phase special, was won by French rider, Pierre Alain Mortier with ‘Cyclade du Barbin’ who had a very good day as he then went on to win the 1.30 Medium Tour with ‘Dream Hope’.

In second place in the Big Tour 1.45 was Dermott Lennon for Ireland who was riding ‘L’Esprit Hero Z’ a gelding, owned by Eamon Bishop.  Third was Danish rider, Martin Dinesen with ‘Neergaard Cressendo BV Z’.  Olivier Perreau (FRA) was fourth with  ‘Dalton du Morion’ and in fifth was another Danish rider, Clara Hallundbaek with  ‘Noortje Van Het Houterhof’.

The Small Tour 1.40 was won by the German rider Helmut Schönstetter with ‘Toulanda Degli Assi’,  second place was a tie between Portuguese rider Joao Mota with ‘Misterio Sobral da Costa’ and the Irish rider, Ciaran Nallon with ‘Mc Flurry 10’.  Another Irish rider, Adam Morgan with ‘Warriors Glory’ was fourth.

In the Small Tour 1.35 class the winner was Spanish rider,  Patricio Valdenebro who was over 2 seconds faster with ‘Klimax Van Het Lindehof’,  than the Italian rider Ferrante Anchisi with ‘Carisma’ who took second place.  Lea de Coulon (Sui) was third with  ‘Gangster 90’.

Lila Bremner was the winner of the Small Tour 1.30 class, riding ‘Cocktail D’Azur’.  Second was Jose Illi (FIN) with ‘Eolita L’ and in third was Javier González Fraga (ESP) with ‘Bubalu’.

Tomorrow jumping will be in full swing here at the Andalucía Sunshine Tour, with 12 more classes and around 1000 horses taking to the arenas. The whole event is sponsored by the Consejería de Turismo, Regeneración, Justicia y Administración Local de la Junta de Andalucía.