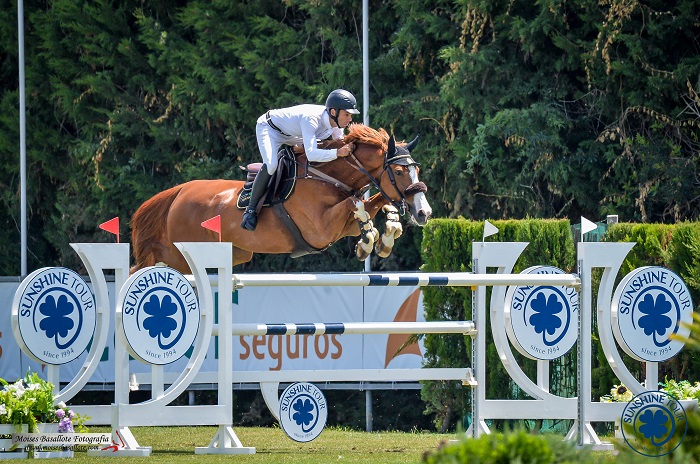 Eduardo Álvarez Aznar and LEGEND (OGANO x NABAB DE REVE) took the top spot on the podium in the Ranking Class in the most intense day of competition so far in the Tour. Today a total of 25,400€ worth of prize money was handed out.  Riding LEGEND, it was Edu’s second victory in this 1.45m class, after a win with MOGAMBO on Thursday of the second week of the Tour. They also took home an extra 1.000€ for being the highest placed Spanish rider, subscribed to the ClipMyHorse channel, which has just started up here in Spain.

The last class of the day was the 1.40m and Paloma Barceló riding the lovely HABANERO took a well deserved win. Only nine riders actually finished on clear rounds in this testing course. Enrique Camiruaga with VAULT 2 (x VALENTINO 240) took second place in front of Jesús Torres with GRUPO PROM HACIENDA who took to the podium for the fourth time today in this Summer Tour.

The course designer for the bigger classes and the Young Horse classes was Javier Trenor ‘Chape’, who designed three international 5* classes last year alone and Marcos Núñez was the designer of the rest of the courses today.

In the 1.35m, Jesús Garmendia and LLAIN DE LLAMOSAS repeated their win from the first week of the Tour, with the fastest round of the class. Once again Olivia Álvarez took second place with GISMO DE PRAVIA (x JIMY DE PRAVIA) and in third was Carlos Lange riding CONTENTO (x CARPACCIO).

The popular Peruvian rider Carlos Merino, who has been a regular competitor here at Montenmedio’s Sunshine Tour for many years, today had a very stylish win in the 1.20m with OFELIA TE QUIERO. In second place was Antonio Carballat riding HOLD UP RATINA CC and in third was Julia Correa riding CLINTEN (x CARRICO).

The 1.10m class was won by Yolanda Carles and QUICO DEL DUERO, who also arrived this week at the Tour. Second was Bárbara Cardo and COLMETTA and third was Paola Chaves riding LEVINKA Z.

Tomorrow we continue with the completion here at Montenmedio with the Pony classes, CSNP1. There are no big classes tomorrow as the horses rest up for the Big Finale of the Summer Tour on Sunday. This is the Grand Prix, FEI Ranking class with 25,400€ in prize money plus the 2,000€ ClipMyHorse bonus for the top Spanish rider. The qualifier rounds for Sunday’s GP were the two 1.45m classes from yesterday and today (which was also another Ranking class).

Everything you need can be found on our Sunshine Tour Mobile APP that is available for both iOs y Android, you can follow all the action live and easily see the entries for each class and the results.