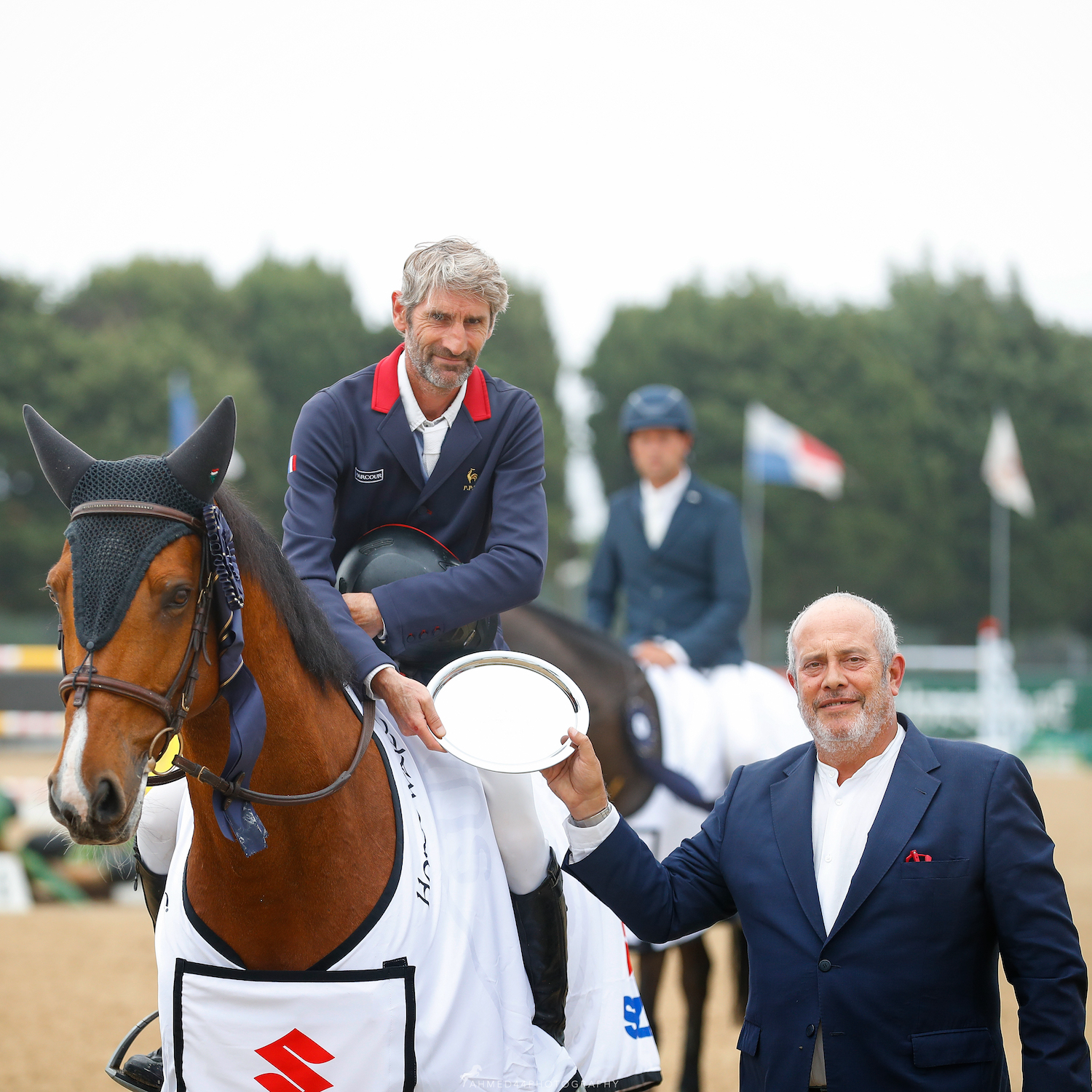 The French National Anthem rang out across Montenmedio today on the last day of the October Tour .

There was not one but two French riders on the podium today in the Suzuki Grand Prix class; taking first place were  Cedric Hurel and  Fantasio Floreval Z.  The 11yr old bay gelding and his rider won this very exciting 1.55m class, which was sponsored by Suzuki, by beating off five other riders and their horses.  This demanding track designed by Javier Trénor,  meant that only six competitors got through to the jump off.

The winner told us: “it was a fairly difficult track that needed to be ridden carefully, especially the last line of fences where there were a lot of faults”.  The French rider went on to describe Fantasio Floreval Z as a generous horse.  He told us that this is their first CSIO3* and winning here at this international show he was: “really very content”.  In a time of just 42.31s  he took the top spot on the podium just 0.67s in front of the British rider, Alex Thompson with Cathalina S, who is by Catoki.  In third place was Juliette Faligot, who was riding Arqana de Riverland, a Selle Français with whom Juliette has already had many good results.

The other Grand Prix class today was in the CSI2* and was sponsored by the Diputación de Cádiz.  This class ended up with the Portuguese rider, Rodrigo Giesteira Almeida and Jorden Van de Kruishoeve, taking the lead in the lap of honour.  This chestnut gelding is a BWP by Nabab de Reve and since Rodrigo took over the ride from Maikel van der Vleuten, the pair have only jumped clears.

In this class there were 17 riders that went though to the jump off and only one had a fence down.  The deciding factor was of course, their times, and only Rodrigo managed to come in under 32s, stopping the clock at 31.94s.  In second place was Edouard Schmitz (SUI) riding Balenciana K and in third place was the American rider Julie Welles with the lovely mare Greatfull.

The CSIO3* Big Class was set at 1.45m and also had a French winner.  This time it was François Xavier Boudant riding the chocolate bay, KWPN gelding,  Ciento.  This was a two phase class and there were 68 competitors in the field.

In the CSI2* Big Class set at 1.35m the very successful Dutch rider Kim Emmen with N-Pezi was our winner and in second was Alain Jufer (SUI) riding Golden Future MM.

The weather today was not at its best but it didn’t serve to dampen the spirits of the crowd as they cheered on the French victory in the Suzuki GP class.

And that wraps up four weeks of pretty intense competition here at Dehesa Montenmedio as we say goodbye to the  October Tour, which included the highlight events such as the three sections of the Spanish Championships and the Nations Cup with a British win.

In January we will fill up the stables again as we start off the year with an international 2* event as a prelude to the Sunshine Tour.  See you all next year!