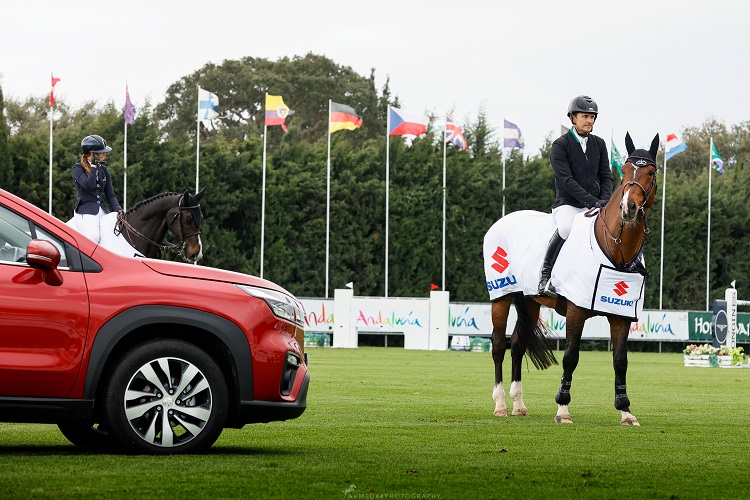 Today he was riding his long term partner, ’Mosito Van Het Hellehof’, and they were one of only two clears in a jump off of just five riders

Today’s FEI Longines Ranking, Suzuki Grand Prix, had the top 50 riders and horses of the week, competing around a demanding track.  Despite the very strong field, just five riders got through to the jump off and in the jump off itself, and only two riders went clear.  Our winner today was first to go in the jump off,  Bernado Cardoso de Resende Alves,  and he threw down the gauntlet and going clear in 40.29s, a time no one could match in this prestigious class.

This well known Brazilian rider is a double Olympian, 2004 and 2008, has represented his country three times in the WEG and in the Nations Cup Final in Barcelona 2021.  Today he was the winner of our 155 meter, Big GP, sponsored by ‘Suzuki’.   He was riding,  ’Mosito van het Hellehof’,   a 10yr old, bay Belgian warmblood by ‘Elvis ter Putte’, who is himself by the legendary stallion, ‘Diamant de Semilly’, The dam sire is ‘Nabab de Reve’.

Bernado has had ‘Mosito’ since 2020, where he actually competed here at Montenmedio, in the 3*, 130 classes.  Over time he has gradually been working on the horse gaining experience and to this end they have recently only been competing at 2* level and have jumped two 2* GP classes together.  Bernado told us that today was just their second, 4* Grand Prix.  Here on the 13th of this month he had one pole in the 4* 150 GP, finishing in 15th place but was second in the Ranking 150 class on the 11th and fourth on the 17th in the Big Tour 150 class.  Today this pair excelled themselves,  Bernado told us he could not be more delighted with the results and this wonderful horse. He was really happy with the course designer, Leopoldo Palacios Jugo, who is from Venezuela,  and the rider praised the courses that have been built throughout this week.

His plans for this year with ‘Mosito’ are flexible but he is not planning on jumping him in the WEGs in  Herning, Denmark in August  as he doesn’t feel he will be quite ready and has set his sights on  next year for  the Pan American games that will be in  Santiago, Chile.  He told us, “The competition here is impressive and I’m delighted with the installations, the organisation and the fact that you can compete in classes designed by the very best course designers in the world.  We are really happy and we will be back next year without any doubt at all.”  The president of ‘Suzuki Ibérica’, Juan López Frade  gave out the prizes.

In second place was British top rider and another Olympian Holly Smith.  She was the very last rider to go in the jump off today and was riding the lovely ‘Fruselli’,  who she has also been bringing up through the classes.  She rode a super first round and was absolutely delighted with him when he finished clear around this difficult track.  In the jump off she was the only other clear round and stopped the clock in just 40.81s.  A well deserved second place and a very happy rider.  Holly is well used to being at the top of the results tables and has been in the top five in the five classes she has jumped so far at the Andalucía Sunshine Tour!

In third and fourth we had two Irish riders, Susan Fitzpatrick and Cameron Hanley riding ‘Verdict de Kezeg’ and ‘Esi Toulouse’ both having an unlucky fence, as did  Sara Vingralkova (CZE) who was fifth with ‘Quisandro.  The class was kindly sponsored Suzuki, the Japanese company who were delighted to present some of their new hybrid car models to the specialist media, here at the Andalucía Sunshine Tour.  The new Suzuki Vitara is one of their most popular models creating a lot of interest especially after its great  off-road abilities have been demonstrated.

In the other Longines Ranking class, the Medium Tour GP 150, which was run earlier in the day, there was a win for Bruce Goodin. This successful New Zealand rider was riding ’Backatorps Danny V’ (Quasimodo Z x Lupicor), who has already won the Medium Tour 1.45 Ranking class here on the 11th of this month.  Today he stopped the clock in the jump off in 39.28s.  In second place in 40.16s, was the Belgian rider Dominique Hendrickx with ‘Koriano Van Klapscheut’, this pair also won the Big Tour, 150 Ranking class on the 18th and are clearly well on form.  Penelope Leprevost (FRA), another top rider here at the Tour, was third today with ‘Texas’ and talented Irish rider,  Richard Howley was fourth with ‘Fame’.  In fifth was British rider,  William Fletcher with ‘Ginadina PP.

Jimena García Rueda was the winner of the 1* Grand Prix class with the lovely ‘Gismo de Pravia’.  In second place was Dutch rider,  Philippe Houtackers with ‘Cazador LS’;  third was the German rider,  Constantin Lauff with ‘Identity’;  fourth was British rider Thomas Plaster with ‘Fatasia’ and in fifth was the Danish rider,  Maria Thrane Jensen with ‘Cayenne 175’.

Other winners today:  Holly Smith with ‘Kimba Castello’ in the Big Tour 1.45;  Kevin González de Zárate (ESP) with ‘Enji du Barquet’ in the  Big Tour 1.35;  Brazilian rider, Pedro Junqueira with ‘Chief Tibri Z MFS’ in the Medium Tour 1.40;  Antonia Platt (GBR) with ‘G Star Blue’ in the Medium Tour 1.30;  British rider Iwan Carpenter with ‘Merllyn’s Chacco B’ in the Small Tour 1.35 and another British rider, who is doing well this week,  Mark Wildish with  ‘Jupiler’ in the  Small Tour 1.30.

Competition starts up on Tuesday here at Montenmedio and the Young Horses (5,6 & 7yr olds) will have their last chance to get that final qualifying clear for the Finals , which will be held on Wednesday the 23rd of March.  This will start up the seventh and final week of the Andalucía Sunshine Tour 2022, sponsored by the Consejería de Turismo, Regeneración, Justicia y Administración Local de la Junta de Andalucía, a través de Turismo y Deporte de Andalucía.  The Invitational GP will be held as the climax of the Tour, next Sunday, with the very best riders from the whole of the Tour set to compete in what will surely be a very exciting final day of jumping.