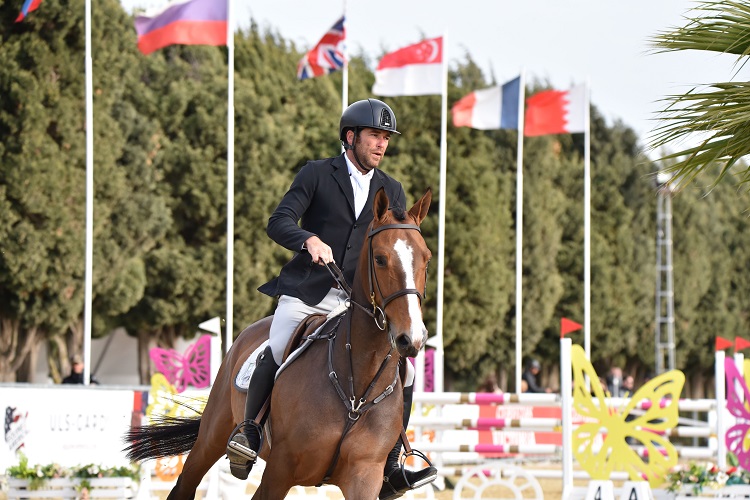 ‘SJL Fizzy Tart’ is back at the top of the placings today with top rider, Ellen Whitaker and they won their 7YO class in great style.  Another British rider, Mark Wildish riding ‘Karim EBH’ was second and in third was a regular Swedish name on the podium, Jacob Hellström with ‘Cidfire EM’.  Back to Britain for fourth place with Nicole Lockhead Anderson and ‘Pikachu TW’ and to  Germany for fifth with Laura Klaphake with ‘Myjorka’.

Adam Botham and ‘Cerano Van de Dijkhoeve Z’ kept up the British side today by winning the other 7YO class.  Second was Jan Vinckier for Belgium with ‘Kanula’; third was another combination we regularly see in the top results, Bianca Babanitz and ‘Bella e Impossibile BBA’ from Austria; fourth was Sean Monaghan (IRE) with ‘Domino Van Het Gehucht Z’ and fifth was the Portuguese rider,  Duarte Seabra with ‘L-Piccola’.

137 horses jumped in this age section and 84 were clear.

In the first 6YO class the winner was Kim Emmen (NED) with ‘Lakoniek’ and she also took fifth pace with ‘Quo Vadis’.  In second was Spanish rider, Mariano Martínez with ‘Sherlock’; third was Geert Van Asten also from the Netherlands, with ‘Lord Pleasure’ and in fourth another Spanish rider, Jesús Bamonde with ‘AGR Toronto’.

The second 6YO class was dominated by Poland who had a clean sweep, taking the first three places.  The winner was Maksymilian Wechta with ‘Eldorado’; second was Adrianna Ostrowska with ‘Landmeister VDL’ and third was Marek Lewicki with 'Fiston de Bo Z’.  In fourth was Jacob Hellström again doing really well, this time with ‘Charles’ and in fifth, was Irish rider, Susan Fitzpatrick with ‘Keatingstown Mister Cool’.

This was the biggest YH section today with 177 horses competing and a total of 96 clears.

The 5YO was a 2Ph Sp and the winner of the first class was Spanish, Carlos Bosch with ‘Mega Coupe’.  Three British riders took the next places;  Olivia Gent with ‘Avant Garde HST Z’; Ronnie Jones with ‘Ruinart Rose’ and  Alex Bishop with ‘Conradoc II Proosthof Z’ who shared fourth place with another Spanish rider, Hugo Álvarez and  ‘Ivaro del Maset’.

The Belgian rider, Dominique Joassin was the winner of the second class with‘LJ Corssini’;  once again in the top results was Kim Emmen in second place with ‘AGA Blue DMH Z’.  The next two places went to Spanish riders; Mata Garat Macías and Joel Valles Rosell with ‘Nasa del Amor’ and  ‘Stella’ respectively.  Finally in fifth was Ivan Dalton (IRE)  with ‘Romelus de Muze’.

108 horses jumped in this year group and 58 were clear.