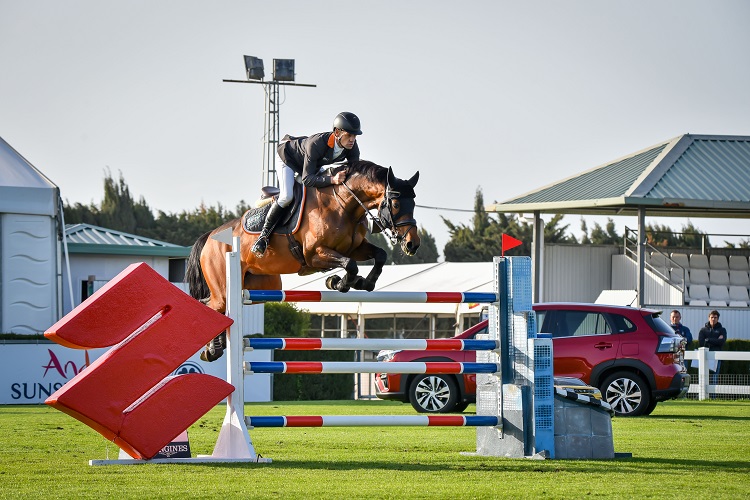 Chris Burton, known as one of the fastest cross country riders in the world, beat off a strong field to take the win in the 1.45 GP sponsored by the ‘Hospital de referencia La Equina’

The eventers are coming:

Australian International eventer, Chris Burton or ‘Burto’, who is renowned as the fastest cross country rider in the world, and a two time Olympian, has already been showing off his talents by winning both 7YO classes, almost as soon as he arrived at the Andalucía Sunshine Tour.  Today he had his best win so far in the 1.45m Small GP, which was a jump off class, designed by the Venezuelan, Leopoldo Palacios and sponsored by the Hospital de referencia La Equina, a medical center specialising in equine treatment, located in Manilva, Malaga.

Chris Burton, was riding the fabulous 10yr old bay mare, KWPN ‘Chedington Hazy Toulana’  who is by ‘Toulon’ from ‘Heartbreaker’.  He only took on the ride recently from Edwina Tops-Alexander but clearly these two have already formed a great partnership as they flew around the jump off in great style and won the class in a time of 45.88 segundos.

In second place was top French rider, also an Olympian, Penelope Leprevost who looked to be the winner of the class until ‘Burto’ took to the ring.  Penelope  was riding the very fast ‘Djagger Semilly’ (‘Diamant de Semilly’) but in the end her time of 46.27s  was not quite enough for the win.  However she stayed in second place ahead of the Norwegian rider, Cecilie Hatteland who was riding ‘Alex’ a gelding by ‘Oakland’ and who also rode an excellent round, but her time was a little slower and she stopped the clock in 47.21s.

In fourth place was British,  Chloe Winchester, who was riding ‘Icaterma’ and had a good clear round in 47.21s and in fifth was another French rider,  Emeric George with ‘Calisco de Terlong’.  Miguel Valdés the director of La Equina Hospital gave out the prizes.

The Big Tour, 1.35 was won by the Czech ride, Sara Vingralkova with ‘Damocles From Second Life Z’ in a phenomenally fast time that no one came anywhere near to.   Finishing her round with almost four seconds in hand over the rider in second place, she stopped the clock in 53.29s.  Maria Louise Kingrod from Norway,  finished in second with ‘Farrah W’ in 57.08s;  in third was Spanish rider Kevin González de Zárate who has had a great week here at the Tour, and this time he was riding ‘Enji du Barquet’;  in fourth was Marc Bettinger for Germany with ‘Quabil’ and another Spanish rider was fifth,  Iván Serrano with ‘Just Blue RV’.

The Medium Tour 1.40, was split due to high entry numbers.  The fastest time however came from the Irish rider Anthony Condon who rode a great round in this speed class with  ‘Ajaccienne’, stopping the clock in 63.16s;  sharing first place was Robert Whitaker (GBR) with ‘I’m Special Too DHH’ in 67.71s.  Two Portuguese riders took the second places, Duarte Seabra with ‘Fernhill Check Your Pocket’ and Rodrigo Almeida with ‘Elektra Hero Z’.  Penelope Leprevost was third with ‘Deesse de Coquerie’ alongside Polish rider,  Maksymilian Wechta with ‘Quvee Prestige’.

The Medium Tour 1.30 also had a Czech winner today.  Anna Marie Vitek with ‘Here I Am’ had a stunning round and was more than four seconds faster than Tamara Klop (NED) who was second with ‘Gaudi VD Molendreed Z.  Maximilian Weishaupt for Germany was third with ‘Friday for Future’;  fourth was Spanish home rider, Teresa Blázquez Abascal with ‘Bella PS’ and in fifth was again, Chris Burton with another new ride,  ‘Jericho’.

In the Small Tour 1.35 Daniela Haase (GER) was both first and second; she won the class with ‘Kyamant Van’t Spieveld’ and was second with ‘M Quality’.  In third was Wilma Weidlitz from Sweden with ‘Cordalis 8’.

In the Small Tour, 1.30, Hollie Pearce (GBR) was our winner with ‘Delina II’;  in second was the Portuguese rider, Antonio Relvas with ‘G T’Aime Sao Miguel’;  in third was British rider Mark Wildish with  ‘Jupiler’.

Tomorrow here at the Dehesa Montenmedio, we have another bust day of jumping with three Longines Ranking classes, one being the prestigious Suzuki Grand Prix.  In this class the 50 riders who have been most successful this week will compete for a sum of  95.200 euros.  That will be the climax of this sixth week here at the, Andalucía Sunshine Tour, which is kindly sponsored by the Consejería de Turismo, Regeneración, Justicia y Administración Local de la Junta de Andalucía, a través de Turismo y Deporte de Andalucía.