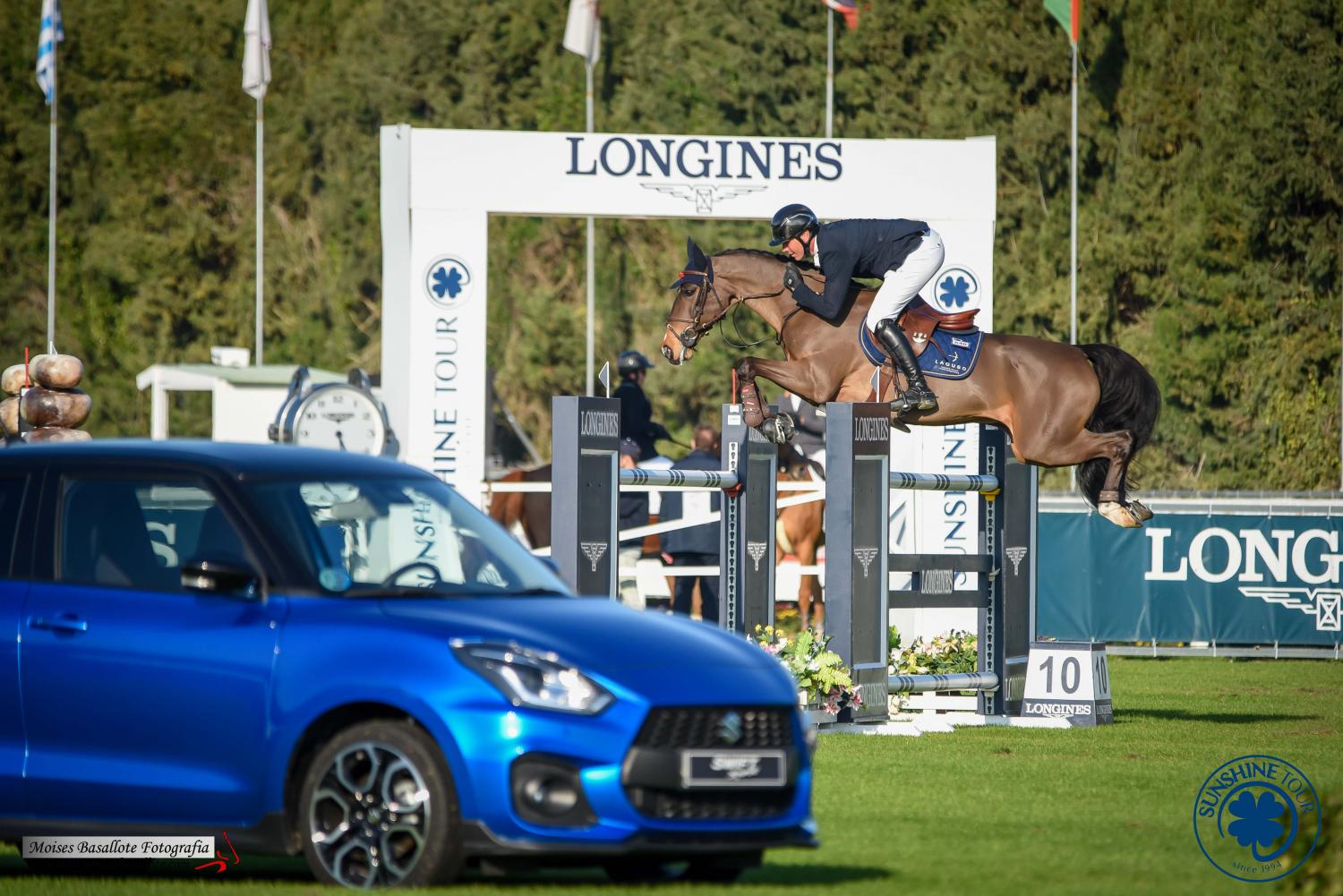 The Young Horses finish off their second week of jumping today with many well on the way to qualifying for the Final on 24th February.

Today Grégory Bodo was in charge of designing the first important 1.50m CSI4* class of the 27th Sunshine Tour.  The French designer set up a challenging 1.50m speed course which many of the riders met with clear rounds. However, German rider David Will was once again extremely fast around the course and for the second week running, was the winner of this Thursday class riding the gelding “Forest Gump 29”, who clearly is at his best on the main grass arena named after David Broome.

In second place was the Irish rider Michael G Duffy who told us  “I thought that I was at an advantage over the other riders today because my mare ‘My Way B. & V.’ has a very fast gallop.  She doesn’t have the biggest stride in the world but she is very fast.  She is a very classy mare and one of the favourites in the stables as she always gives her best, as she did once again today.”  He also went on to say  “The course was very nice and the course designer did a great job as it’s the first big class starting off this week.  It was big enough but very fair for the horses with good distances for the younger horse that are jumping for the first time at this level”. This applies to ‘My Way B. & V.’ who is owned by Ashford Farm as it was the first time she has jumped in a 1.50m class.  “she couldn’t have had a better ‘premiere’ at this height.  I am extremely grateful that Enda Carroll supports me so well and let’s me ride this wonderfully talented mare”. Michael Duffy is part of the ‘Madrid in Motion’ team in the Global Champions League and has brought his best horses to the Tour to prepare them for the intense season of jumping ahead.  “I am going to jump “Chappo Chey” in smaller classes throughout the Tour so he stays on form and is ready for the GCT but so doesn’t tire too much, with “Lapuccino 2” I will jump the Grand Prix classes. I have also brought  some Young Horses with me that are owned by Karl Hanley to prepare them for competition as this is the best show ground in Europe, without  a doubt, to do so.

In third place was the Turkish rider Derin Demirsoy who has had a great week here so far, today he was riding gelding “Dadjak ter Puttenen”.

Spanish riders who did well today included Mariano Martínez Bastida, who has just arrived at the Tour and had two wins, one in the 1.35m Big Tour and another in the 1.40m MediumTour. “I have had the mare “Hybalia”who won the Big Tour class today, since she was 5yrs old.  She is a very competitive mare in 1.35m to 1.40m classes. Last year she won a lot in international classes.  The 1.40m class I won with “Quicksilver”, you know him! He always wins!”  Mariano’s plans for the next few days are  “to start off slowly in the big classes and next week jump a few of the important big classes.  This weekend I would like to jump a ranking class with “Quicksilver.””

Olivier Perreau from France and“GL Events Dolce Deceuninck” was the winner of the 1.45m Big Tour class that had very few clear rounds.  In second place was the German rider Gerrit Nieberg with “Chactus” and in third was the winner of last week’s Horseware GP class the brilliant Belgian rider, Jérôme Guery riding “Tango”.

Next week the Young Horses have their Finals on Wednesday the 24th February.  Kim Emmen at the moment is looking to be a top contender to do well in the Final, with both “Astrid’s Lad”and “Lady Angeles” and  today she took the two top slots on the podium in Section A of the 7yr old class.  Clio Boni, from Italy has also been doing really well with her horses and had great results today, coming both first and third in the other Section of the 7yr olds with “Lógica”and “Japonica Di La’ San Biorgio” respectively.