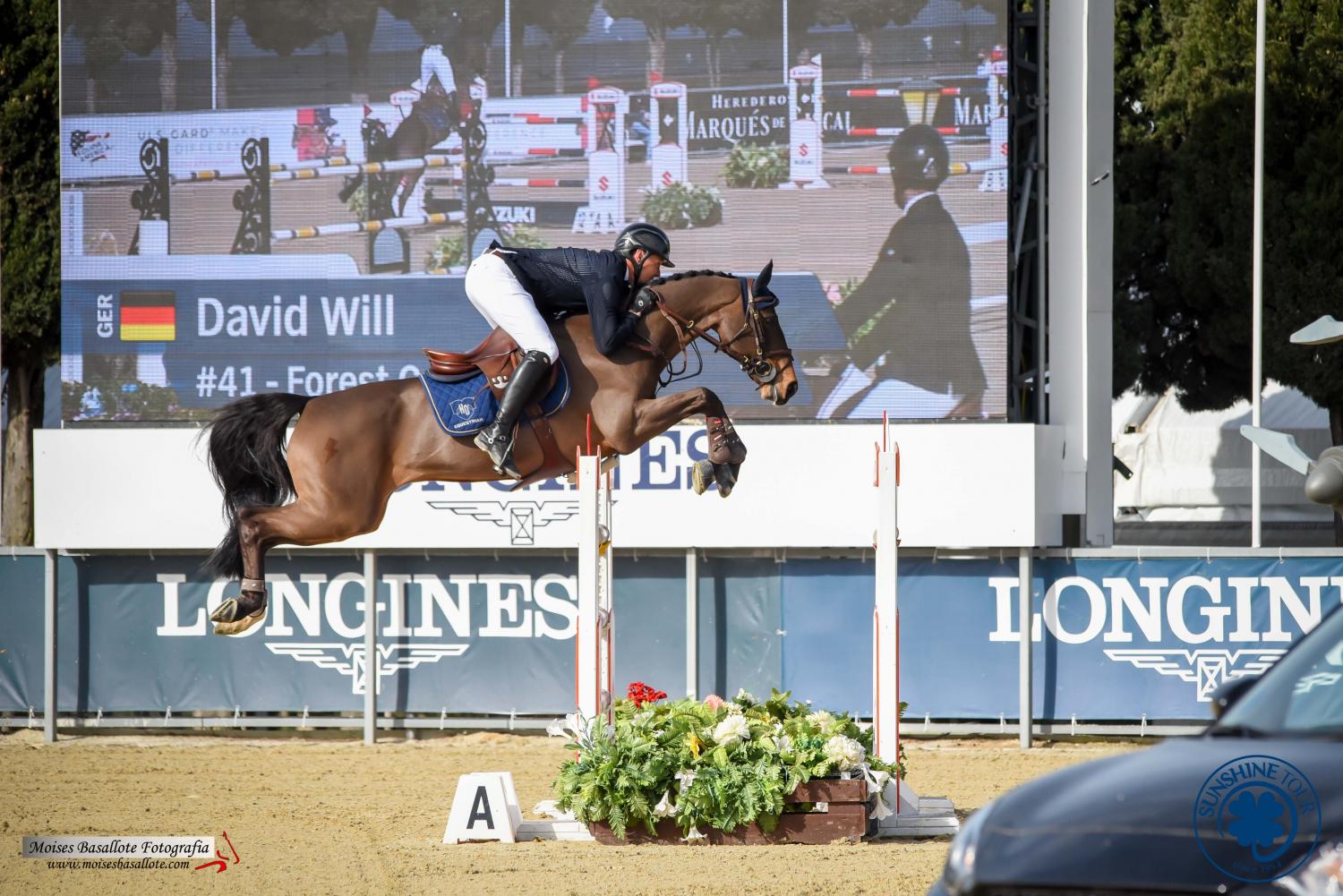 With more than 70,000€ in prize money it was a busy and exciting day of competition

Today turned out to be one of the most important days of this week here at the second week of the Sunshine Tour, with two classes that were to be held tomorrow having been bought forward a day, the Medium Tour Grand Prix and the Small Grand Prix class of the Big Tour.  The Small GP of the BT was sponsored by the world leaders in radio frequency therapy, INDIBA®.  The German rider whose name is becoming very familiar here at the Tour, David Will, shot to the top spot with just under a second in hand over the world number one ranked rider, Stever Guerdat.

David Will knows what it is to win here at the Sunshine Tour. In just these first two weeks of the Tour he has already won three classes with his amazing horse “Forest Gump 29” who is a 15yr old Oldenberg gelding; “he never disappoints me, whenever we compete he always wins something.” David has had “Forest” “for two years and since the beginning he was part of my team of horses.  He is a very small horse but a real fighter, a small horse with a big heart.”  The German rider plans to stay in Montenmedio for two more weeks and then,  “return home for a rest.  When you have done enough you all deserve a few weeks rest.  The season in Germany doesn’t kick off until May so we have plenty of time and can afford to be relatively relaxed for a while.” David told us that  today’s course was one that  “I really enjoy.  It was one of those courses that when you walked it appeared relatively straightforward.  It gave you the impression that wouldn’t be much of a problem to jump well but later on it was clear that it was pretty complicated and there were a lot of faults.  The line from fence 3 to fence 6 was tough and there were many ways to ride it.”

Steve Guerdat’s time was 0.58s slower than David and in the end had to settle for second place with the lovely mare, “Uranie de Belcour”, who he has been riding since June of 2020. In this very exciting jump off, third place was taken by the Egyptian rider Mouda Zedaya who was very hot on the two leaders’ heels. He was riding the chestnut gelding “Galanthos SHK”.

The Medium Tour Grand Prix was held in the ‘David Broome’ main arena.  There were 78 combinations entered and 21% managed to get in to the jump off.  After fierce competition the winner of this class was the Swedish rider Douglas Lindelöw riding “Cheldon”. It is the first time that Douglas has come to the Sunshine Tour and he intends to stay for the whole 7 weeks of competition.  “It’s a fabulous place, I love it!”  “Cheldon”, is an experienced jumper of these big classes and he is 12 yrs old.  “He jumped very well today in both the first round and the jump off.”

Japanese rider, Eiken Sato, who was leading the class up to that point, had to be content with second place today.  He was riding “Chacanno” who is 14yrs old and by “Chacco-Blue” with the dam sire “Kannan”. “I am very pleased with second place in this class.  My horse jumped fantastically well.  I have had “Chaccano” for two and a half years and he is a marvellous horse.  I feel very grateful to have a horse this good to ride.”  Eiken will be here at Montenmedio for all seven weeks and afterwards,   “we will return to Germany and do a few competitions there.  Later in the year, we hope to go to the Olympic Games.  Let’s see what happens!”

Third place in this class was another Swedish rider, Angelie Von Essen with her scopey grey mare on “Cochella” who is 16 yrs old .

Another Japanese rider Daisuke Fukushima also had a great day. This rider has a great deal of experience behind him and has already competed in the World Equestrian Games and The Olympic Games.  Today he added another success to his record by taking second place in the 1.45m Big Tour class, riding the gelding, “Tailormade Contou”, who has only just begun to compete here at the Sunshine Tour. He came second today behind the talented French rider, Guy Jonqueres D’oriola, who was riding “Ando de la Soire”.

Mariano Martinez Bastida also had a really good day today.  He was both first and third in the 1.40m Medium Tour beating off serious competition in this class with 98 entries.  Once again the amazing “Quicksilver” and “Cleartoon” were the main protagonists although Steve Guerdat managed to squeeze in to second place riding the 8yr old gelding, “Pb Djazz D’arvor".

Tomorrow classes begin early at 09.00 with the Small Tour Grand Prix class and at 15.00 The big class of the week, the Equine America Grand Prix tales place with 60 competitors of world class standard.  This class is the highlight of the second week of the Sunshine Tour, finishing off our first CSI4* event.

All classes are streamed live with both English and Spanish commentary on the official channelClipMyHorse.Tv. and from our Web page or the Sunshine Tour App.