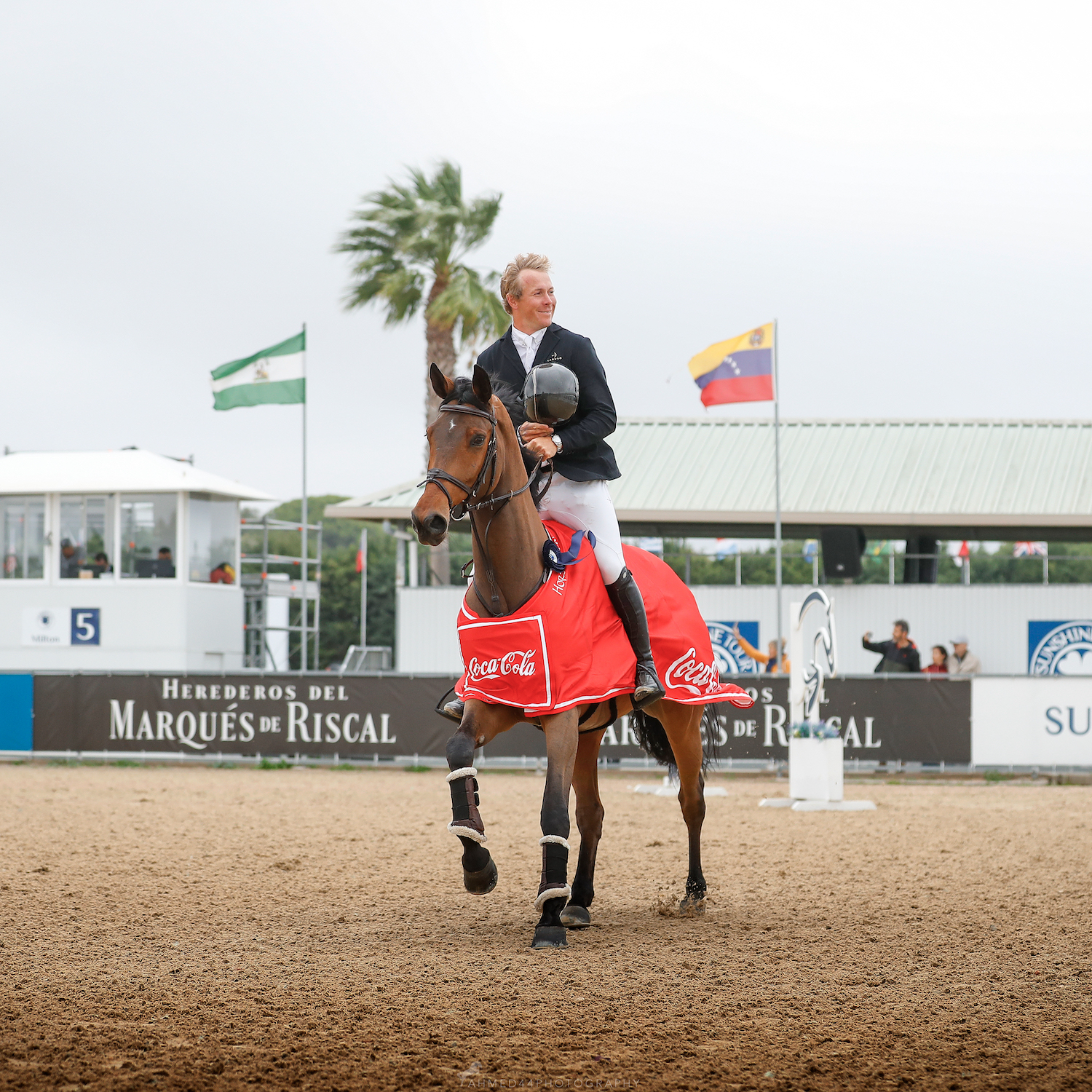 Here at Dehesa Montenmedio we are on the penultimate day of the October Tour and tomorrow it draws to an end with the highlight of the weekend, the Suzuki Grand Prix class.  Today there were two very important classes, one was the 1.40m, Royal Bliss Trophy, which was won by the Italian rider Giampiero Garofalo withthe 8yr old, Oldenberg mare, Vivolenska.  There were 10 combinations through to the jump off in this class, five went clear with Vivolenska stopping the clock in just 36.72s to win the class. The Irish rider who has already been on the podium, winning the 1.40m class on Thursday just this week, Francis Derwin, was once again in the rosettes riding Deep Pockets and today they took second place.  Another Italian rider, Giammarco Marigo took third, with Caloubri in just 38.57s.

The other important class today was the 1.50m, Coca Cola Trophy class which was a Longines Ranking class. 82 combinations took to the arena in this two phase class and in the end, victory went to the German rider, David Will.  David only arrived recently at the October Tour and today, with the wonderful Undercover Z, he rode a fast neat round to win the class.  This pair have been competing together for barely 3 months, yet this is the second time they have been on the podium in an international class.  The British rider Jackson Reed Stephenson was riding the lovely Exception today and had a really great round, finishing in a well deserved second place.  In third place in this Coca Cola Trophy class, was the American rider Hilary MC Nerney with Lovelight.  These two arrived here at the Montenmedio showgound directly from the USA just last Monday, the 25th of this month, to take part in the Nations Cup team.  The class was held in one of the Geolastic arenas as the weather forecast predicted rain, yet almost none fell today and a great day of jumping was had by all.

Another member of the USA Nations Cup team was Carly Anthony who was today’s winner in the 1.45m CSIO3* Big Class with the 9yr old Brazilian mare , VDL Stella.

With a mere one hundredth of a second in hand, the the current Spanish champion Ismael García Roque was today’s winner of the 1.40m CSIO3* Big Class which was the first class of the day. He was riding Divina de la Cologne and his time in the jump off was unbeatable, although Barbara Schnieper with Inook really had a good try.  Third place went to Kevin Gallagher and Clark who are having a very successful week here jumping.

The Medium Class set at 1.35m, was also won by a Spanish rider, Inés Hernández Yanguas with Adrem.

The Young Horses also jumped today and the 7 yr old class was once again, for the third time, won by the Italian Luca Moneta Jolie Coeur D’Avril. Malgorzata Cisek-Lewica and Daisy, were second and once againKim Emmen and Lady Angeles were on the podium, today they took third place.

In the 6yr old class, King Lepantino, by Arezzo VDL, and Lucky Star W, by Big Star, were our winners in the 5 and 6yr old classes respectively.  Marek Lewicki and Skye Morssinkhof were their riders.

Tomorrow is the last day of the October Tour with 5 classes three of which are Longines Ranking classes.  The highlight will be the Suzuki Grand Prix class set at 1.55m and which starts at 12.30h.  You can follow the live action as always on ClipMyHorse.TV and on the Sunshine Tour web site.