Dermott Lennon has his first win so far at the Sunshine Tour! 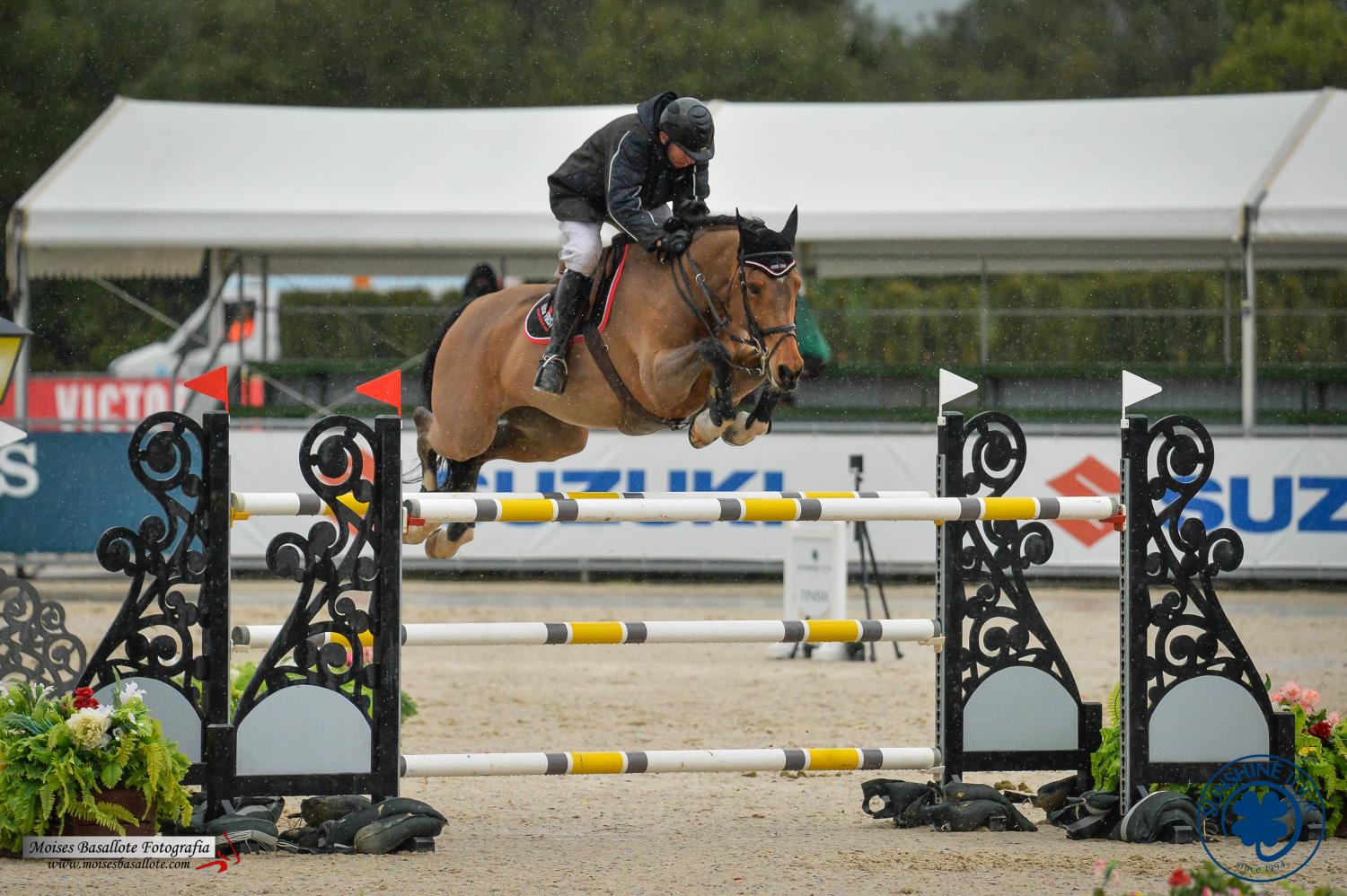 Tomorrow we hold the Tío Pepe Big Tour C class and the postponed YouHorse, Small GP so we will have a busy and exciting day of jumping.

Today was extremely wet here on the Atlantic coast and as the clouds didn’t want to move on the decision was made, due the sheer volume of rain that had fallen, that it would be prudent to move the important and biggest class of the day over to tomorrow.  This means that tomorrow we will hold the CSI4*, Big Tour, Longines Ranking class, at a height of 1.50m, which is sponsored by YouHorse Trophy.

Despite this, the other Ranking class was able to go ahead here at Montenmedio.  The Medium Tour C at 1.45m, was held in the Milton Arena which drained perfectly and allowed the very competitive set of 72 competitors to carry on with their day as usual.

The International Irish rider, who will be well used to rain at home, Dermott Lennon was riding the amazing mare “MJM Pursuit”.  Dermott, is very well respected in Spain and won Gold here in the World Equestrian games in Jerez in 2002.  He was also Individual European Champion in 2001 and needs very little introductions with multiple top trophies under his belt.  The mare is also a prolific winner on the international stage and is an Irish Sport Horseowned by MJM (IOM) Holdings and by the stallion Aldato.

The class was a 2phase special and Dermot finished the second phase clear, in a time of 31.67s just ahead of the Danish rider, Andreas Schou riding one of the many horses he has brought to the Tour, “Afghan”.  This pair stopped the clock in 31.86s.  In third place was the Dutch rider whose name pops up on the leaderboard in almost every class she enters!  Kim Emmen.  Today she was on her regular winner, who is owned by the Bruntwood Farm, the lovely stallion “Warriors Glory”.  In fourth place was the top British rider Matt Sampson with the seasoned campaigner here, “Curraghgraigue Obos Flight.”

In the Big Tour A class held in the Baloubet du Rouet ring, Kim Emmen flipped the podium on Dermott Lennon.  Riding “I Love You M” she took the top spot in this speed class in a very fast round and Dermott had to make do with third place riding the, mare “Absolutely Kingmar Z””.  In between these two, the German rider Max Nieberg took a well deserved and very fast second place riding“Highway FBH”.

Italian rider Luca Moneta was the winner of the 1.45m, Big Tour riding “Chilli 41”.  This mare also was the winner in one class of the CSIO3* Autumn Tour here in Montenmedio.  Continuing his successes and second  in this class, was Ignace Philips de Vurst with “Handige Harry”.  In third was the American rider Julie Welles who is a regular here at the Tour with the lovely mare owned by Cherry Knoll Farm, “Greatfull”.

Another Italian rider, Camilla Vittadini was the winner of the Small Tour C (1.40m), riding “G&C Urika du Plessis”;  just behind her in second was the young French rider Eden Leprevost Blinlebreton, riding “Une Etoile Landaise”.  Both these riders have had really good  results so far this Tour.

Today there was also a great result for local Spanish rider Jesús Torres, who was not only fifth with “Dianvaro BF” in Big Tour 1.45m but also won the Medium Tour B class very comfortably with the lovely “Grupo Prom Hacienda”. British rider Emily Llewellyn was second in this class riding the mare Chaska II who is by Stenograph.

More Spanish riders that succeeded today included Enrique Camiruaga in eighth in the Big Tour 1.35 and Manuel Fernández Saro, also eighth in the Ranking class, Medium Tour. Diana Marsá, was the winner of the Small Tour B class at 1.35m and José Bono, was fourth in the same class.  Finally Olivia Álvarez took second place in the Small Tour A class and Pablo Moralejo with “Ligona” was third in the CSI1* at 1.25- 1.30m.

A truly international field of riders and horses.

Tomorrow we hold the Tío Pepe Big Tour C class and the postponed YouHorse, Small GP so we will have a busy and exciting day of jumping.

You can follow the action live on ClipMyHorse.TV and on the Sunshine Tour web page or the mobile App