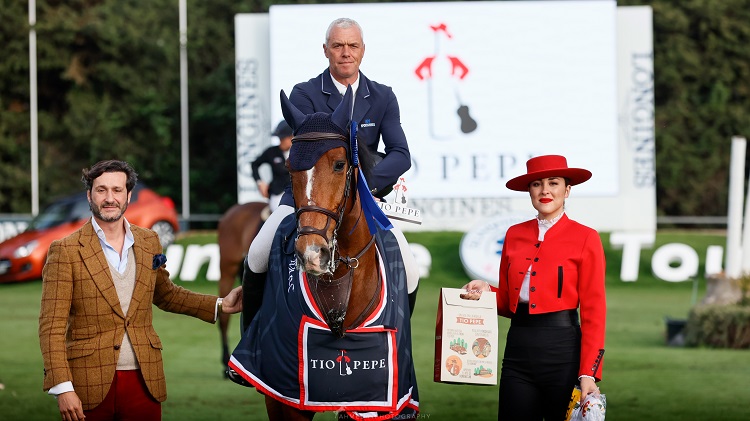 with ‘Koriano Van Klapscheut’, this fast Belgian rider flew around the difficult jump off of 20 participants, winning with almost a second in hand

The Tío Pepe Trophy,  was one of the two Longines Ranking classes today.  Set at 1.50m, and held on grass, the course was built by the Venezuelan judge,  Leopoldo Palacios.  The class had a large field of 92 and just 20 went clear in the challenging first round, that included two roll-backs and some forward distances.  Dominique Hendrickx was our winner in a very fast time;  indeed this rider from Belgium is well known for his talent in jump offs, and today he didn’t disappoint, finishing the course in just 38.19s.  He was riding the 12 year old  ‘Koriano Van Klapscheut’, who is by  ‘Lord Z’, dam sire being ‘Darco’.

In second place also with a beautifully ridden round, just under a second slower than our winner (39.13s),  was Irish, Susan Fitzpatrick who was riding the ‘Diamant de Semilly’ gelding, ‘Verdict de Kezeg’ (dam sire, ‘Vas y Donc Longane’).

Norway took a well deserved third place in this class in 40.55s, with Therese Henriksen who was riding ‘Cyclone L’Epivent’ (Ulixe x Arpege Pierreville).  In fourth was the talented Dutch rider, Kim Emmen with ‘Delvaux’, who is by ‘Chacco-Blue’ (x ‘Lancer II’).  Tim Wilks was fifth for Canada with a characteristically stylish round, on the lovely ‘Diamanthella VG Z’ another top horse by ‘Diamant de Semilly’ dam sire being, ‘Hickory Mail’.

The other Ranking class today was the Medium Tour 1.45  which was held on grass in the Hickstead arena.  Irish, Michael Pender continued his run of great rounds today, with ‘HHS Fortune’ (‘Catoki’ x ‘Douglas’).  This pair are major players here at the Andalucía Sunshine Tour as yesterday he also won his 1.45m class.  The class today was a 2Ph and his time in the second phase was 24.54s.

Ellen Whitaker (GBR) also had yet another great placing today, she was second in 25.19s with ‘Fiona des Hayettes’.  This pair have already won this class twice, in both weeks three and four.

In third was the Brazilian Olympic rider, Yuri Mansur with the wonderful ‘Away Semilly’ and in fourth there was a tie, with William Fletcher (GBR) riding ‘Ginadina PP’ and another top Brazilian rider, Andre Reichmann with  ‘Quinetto Z.

The Big Tour 1.45, 2Ph Sp was split due to very high entry numbers.  Once again Holly Smith (GBR) was top of the podium with  ‘Azolette’ and had the fastest time of the day in 32.22s.  Sharing first place was Spanish rider,  Jesús Garmendia with ‘Valut 2’ in 32.97s  German rider Frederike Staack took one of second placings in 33.66s with  ‘Copain du Perchet CH’ and another British rider took the other second place, Adam Botham with ‘Arge’ in 33.75s.  In third were German rider, Marcel Marschall with ‘Jesprit HS’ and Swedish rider, Marcus Westergren with ‘Fellaini de Liebri Z’.

Rodrigo Almeida for Portugal with ‘Elvic V/H Hoeve-Terras Z’ was the fastest in the Big Tour 1.35.  In second was Eduardo Álvarez Aznar for Spain with ‘Bellefleur PS Z’ and in third, was another British rider,  Sameh El Dahan with ‘WKD Valencia’.

There are 12 classes tomorrow here at the Dehesa Montenmedio, and there will be six rings running, with jumping beginning at around 09:00 and finishing at around 17:00.  The event is kindly sponsored by the Consejería de Turismo, Regeneración, Justicia y Administración Local de la Junta de Andalucía, a través de Turismo y Deporte de Andalucía, and this means, that entry to the show for the public to spectate and parking, is free.  There are plenty of restaurants to enjoy and a busy shopping zone to investigate.  If you are unable to attend in person the whole event is streamed live and you can access this free, either on our web site,   www.sunshinetour.net   or through our application,  Sunshine Tour app where you can find links to all results and starting lists etc.