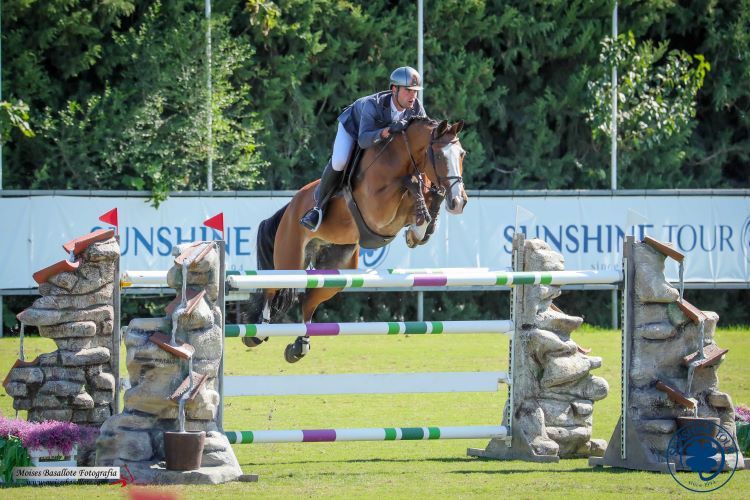 and with Pride of the Lowlands BH in the 5yr old class.

Derin Demirsoy is a regular visitor here at the installations and today the Turkish rider celebrated two wins.  In the competitive Big class ,he had the fastest time by a quite a distance winning in 62.6sec with the gelding owned by Turkish Equestrian,  Dadjak Ter Puttenen (Toulon; dam sire, Vanitas).  The class was a one round, fastest time and held in the grass, David Broome arena.  In second place was the British rider James Wilson who finished in 64.11sec with Galway Bay JED (Romanov; dam sire, Lux) owned by Rupert Nuttall.  This pair were the winners in this class last week.  Another of the top international riders that is competing here, Laura Kraut from the USA,  was third riding Constable II (Harley; Damd sire, Lupicor) who is owned by Cherry Knoll Farm.

In the Medium Class B, 1.35m there ws a victory for the Irish rider Max Wachman  who stoped the clock in just 52.41sec with the mare, Brooklyn de Hus who is by the lovely Conrad.  Kayleigh Watts (GB) was once again on the podium with Kimosa Van Het Kritrahof this time taking second place and continuing her string of excellent results here at the Autumn Tour.  In the same vein, the very fast Spanish competitor, Mariano Martínez with the very consistent mare, Hybalia, was third.

Tom Wachman from Ireland, was the clear winner of the 1.30m, with another horse rarely out of the rosettes, Cesha Old. Today they won this class for the fourth time so far, in the only time under 60 seconds stopping the clock in just 54.18sec.  Finishing in second place in 60.14sec was the British rider, James Wilson with Cooley Elusive and the Spanish rider Mario Rotllant with Cerano were third in 60.14sec.

The 7yr old class is a 1.35m class and is always hotly contested.  Today there was a brilliant win for the Spanish rider Joel Vallés riding the talented mare, Nasa de Toxandria owned by Dierckx, by Vertigo Saint Benoît and from a Chopin Van Het Moleneind mare.  Second place was taken by yesterday’s winner of this class, the Canadian rider, Kara Chad with Matthew Sampson’s Irinka Lady. Laura Kraut was again successful, coming third on the extremely promising Seleste BZ who has rarely been out of the placings here at the Autumn Tour.

The British rider Olivia Skinner was the winner of the 6yr old class for the sixth time with her own mare Jobijn by Everdale, dam sire AES Atlantic.  Julie Welles (USA) was also once again, up in the top placings on her Kannan mare, Jacquard (dam sire, Indoctro) and they were just a mere fraction behind today’s winner.  In third was The very successful Spanish rider José Fumero with the gelding Esto de Viscourt by Classic Bois Margo; dam sire, Mozart des Hayettes.

As noted before Derin Demirsoy had a second win in the 5yr old class with Pride of the Lowlands BH who is by the famous stallion Darco.  Second was the British rider Charlotte Geddes with her own mare, Celeste RBF Z who is by Cape Coral RBF Z; dam sire, Cassini I.  Third was the Swedish rider Linda Heed with the mare Valentina by Valentino and owned by Vattle AB.