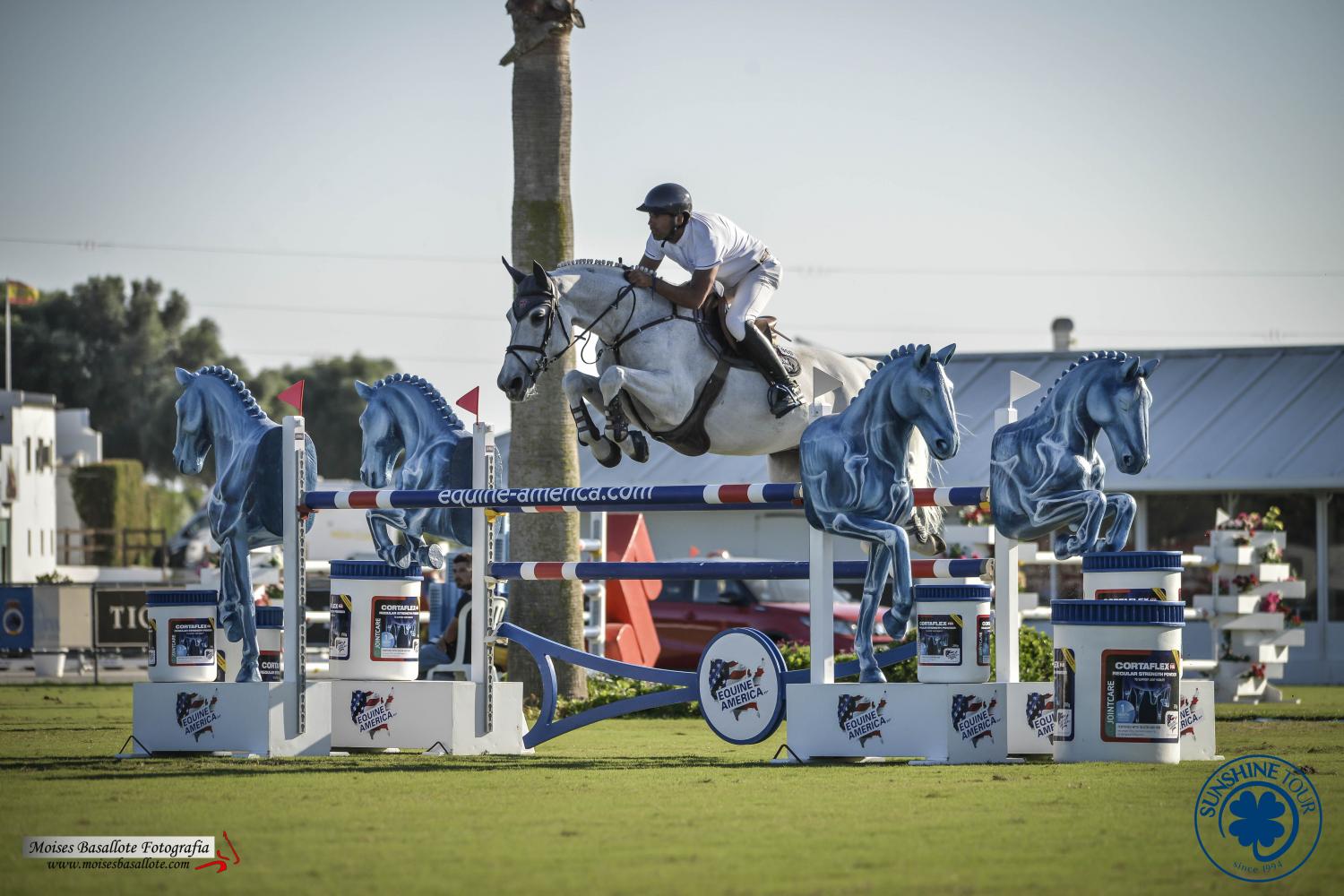 You may follow all competition live on ClipMyHorse.tv or through the Sunshine Tour official web site and our App.

Sun and a great atmosphere marked the first day of the International October Tour as it kicked off with the first week of three, and with 435 horses competing across the board.

The Spanish rider who took Bronze here last week, in the Spanish Absolute Championships, Mariano Martínez Bastida was our first CSI2*, Big Class (1.45m) winner.  He was riding the amazing grey, Quicksilver who is by Quick Star and this pair have a very long history of triumphs here at the Sunshine Tour showground.

Bastida was out to win from the start of his round and kept the talented British rider Joseph Clayton off of the top spot.  Joseph was riding Gentlemen vh Veldhof, a 15yr old BWP who, up until this summer, was with Czech rider, Ales Opatrny with whom he won the CSI2 * W Prague last May.  This relatively new partnership seems to be a complete success.  Third place went to the Brazilian rider Felipe Amaral who was riding the Dutch Germanico T who is by Numero Uno.

Julie Welles was the well deserved winner of the Big Class (1.40m) with an impressive round on the Westphalian mare Greatfull, who is owned by Cherry Knoll Farm.  This win marks the exact, one year anniversary of this pair beginning to compete together here at the October Tour 2020.  They arrive here on the heels of winning the CSI3* in Deauville and with a second place at the CSI2* in Opglabbeek.

Second place in this class was taken by Maryk Sahney from India, riding First Colt who is by the well loved Coltaire Z. Third place went to the Dutch rider Skye Morssinkhof who was mere hundredths of a second behind with the mare G-Vingino-Blue (VDL Zirocco Blue; Dam Sire Orame).  The class was run under table A;  the time allowed was extremely tight leaving a number of competitors jumping clear but racking up time faults.

Another notable performance today was from the Spanish rider Ainhoa Manero Benavente in the Medium Class 1.35m (FT).  Ainhoa was riding the gelding Fortin who is by Forsyth (Ds Quinar Z), well known for their speed.  The only pair under the 60s  mark, with 59.64s, they finished almost 3s in front of the Portuguese competitor,  Carolina Rolo Campos who took second with the 9yr old gelding, Concerto de Brunel.  Not only that, Ainhoa was more than 9 seconds in front of Camilla Siekmann from the USA who was riding Ecolano VSRomano and who took third place.

Commandant Geoff Curran (IRL) the winner of theNations Cup in Drammen this August, has started off his Tour by winning the Medium Class 1.30m.  He was riding Dowth Hall by Flex a Bill and co-owned by the Minister For Defence and Alice Stanton. He rode 4 horses over the course of the day here, coming in clear with two of them.  Second position in this class for the British rider Lila Bremner who was riding the gelding Cocktail d’Azur by Prince Blue.  In third place was Regis Villain from Israel, riding the French stallion,  Dreamer de la Pointe who is also by Numero Uno. This pair are frequently found on the podium in international 2* events.

In the 7yr old class the Spanish rider Kevin González de Zarate took the win with another French horse, “Enji du Barquet (by Qlassic Bois Margot).  There were 36 entries in this class which was held in the Milton arena.  Second place was taken by Nano Healy (IRL) with Costa Concordia by Colestus.  Since Nano has been riding this mare in the 7yr old classes, they have had 15 clears from the 18 international classes that they have competed in.  In third place was a well know favourite here at the Sunshine Tour,  British rider Matthew Sampson with Jacks O (by I’m Special de Muze; Ds Numero Uno) owned by Runway stables B.V.

Julie Welles had another win today, this time in the 1.25m, 6yr old class with the British bred mare Kelling Star, by Big Star and owned by Beverly Widdowson. Second place was British rider, Cressy Neads with another mare, Gremlin (by Otangelo, Ds Stakkato Gold) and in third with another success today, was Kevin González de Zarate riding Kristal’s Beauty B, a Dutch mate by F ONE USA.