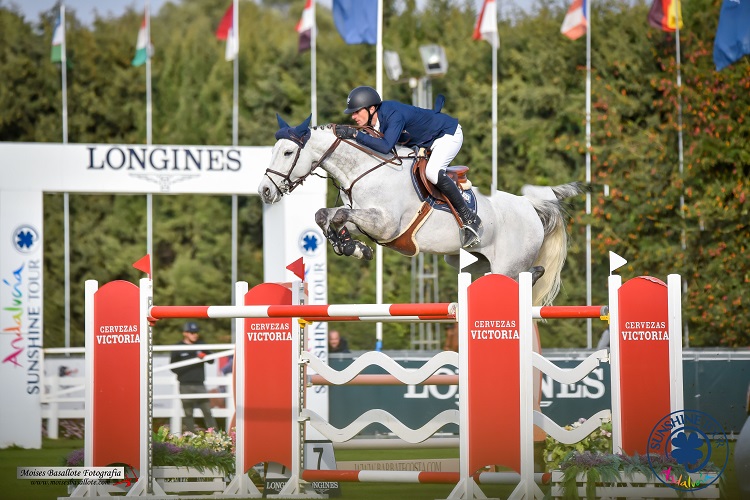 The three time Olympic rider who was part of the Belgium team taking bronze in the Tokyo Olympic was our winner today.  Gregory Wathelet needs little introduction in the world of showjumping and today, riding his own, ’Argentina de la Marchette’ he was the winner of the ‘Trofeo Cervezas Victoria’;  the Victoria Beer Trophy.

This Longines Ranking class was held in the main arena and set at 1.50m, it was the biggest class here today.  ‘Argentina de la Marchette’, is a lovely grey mare that is the property of the rider.  Indeed Gregory rode the mare here in the 7yr old classes here back in 2019 and has been her partner in the ring since she was 5.  The mare is by ‘Acajou de la Marchette’ who went on to be gelded and competed until he retired in 1.30/1.40m classes,  and the dam sire is ‘Del Piero PB’.  Today they jumped a fabulous clear in the jump off in the very fast time of 34.78s which proved to be unbeatable in this very demanding class.  Gregory and ‘Argentina de la Marchette’, have already been in the rosettes here at the Andalucía Sunshine Tour and were second in the CSI 4* 145m class on the 11th of this month.  They received their trophy today from Genoveva Ferragut, Comunicación de Cervezas Victoria who were the sponsors of the class.

Gregory also had another good result today as he was second in the Big Tour 1.45m class with ‘Sandero’ who is by ‘Sandro Boy’.

In second place in the ‘Cervezas Victoria’ class was the French rider Olivier Perreau with ‘GL Events Venzia D’Aiguilly’ (‘Diamant de Semilly’, ds. ‘Quick Star’) in 36.17s, who last year won a 1.50m class here at Montenmedio, and also a 1.55m in Montecarlo last July, not to mention a 1.60m class last year in August, in Valence.  She is a wonderful tribute to her sire ‘Diamant de Semilly’ who sadly passed away this week.  In third was the Polish rider Maksymilian Wechta with ‘Chepettano’;  and two Swiss riders took the last two placings, Thibaut Keller with ‘Happy Girl T’ and Alain Jufer with ‘Dante NM’.

The Medium Tour 1.45m was also a Ranking class and was won by the Dutch rider, Leopold Van Asten with ‘VDL Groep Urane de Talma’ (‘Argentinus’, ds, ‘Landor S’).  Their time was just 20.41s in the second phase of this class, beating the French rider, Olivier Perreau who took second place in a time of 21.01s.  This time he was riding ‘GL Events Dolce Deceuninck’.  Swiss rider Aurelia Loser was third with ‘Anaba Haize’; Austrian rider Max Kühner with ‘Up Too Jacco Blue’ and another well known Swiss rider,  Steve Guerdat  with ‘Is-Minka’ made up the rest of the placings.

Leopold Van Asten was also third today in the 1.45m Big Tour class, with ‘VDL Groep Nino du Roton’, behind Gregory, and they were both beaten in this class by the Spanish Olympic rider Eduardo Alvarez Aznar.  He was riding the impressive stallion ‘Enjoy de la Mure’ who is by ‘Vigo Cece’, dam sire’ Sable Rose’.

Other results today included the French rider, Fanny Guerdat Skalli winning the Big Tour 1.35m class with the stallion ‘Amitie Des Douces’, who is also by ‘Diamant de Semilly’.  This really continues to demonstrate the amazing importance of this wonderful stallion ‘Diamant de Semilly’ in the world of top showjumping and we are delighted that his breeding line will continue in horses that are proving to be incredibly  talented.

Alexa Larkin (ITA) had yet another top podium finish with the very talented ‘Lady Angeles’ in the Medium Tour 1.30;  Antonia Andersson (SWE), took the top two places on the podium in the Small Tour 1.40m with ‘Dexter’ and ’Dyneine de Lilau’ respt’ and in the 1.35m German rider Elena Appendino was the winner with ‘Iceman’.

In the CSI1* the Irish rider Gabrielle Enright was the winner of the 1.30m class with ‘Bentley’.  Lara Cristina Diego Gutiérrez (ESP) with ‘Actor de Pravia’ won the 1.20m, and the 1.10m was won by Finnish rider,  Sani Illi with ‘Manouoscha Van’t Steenputje’.