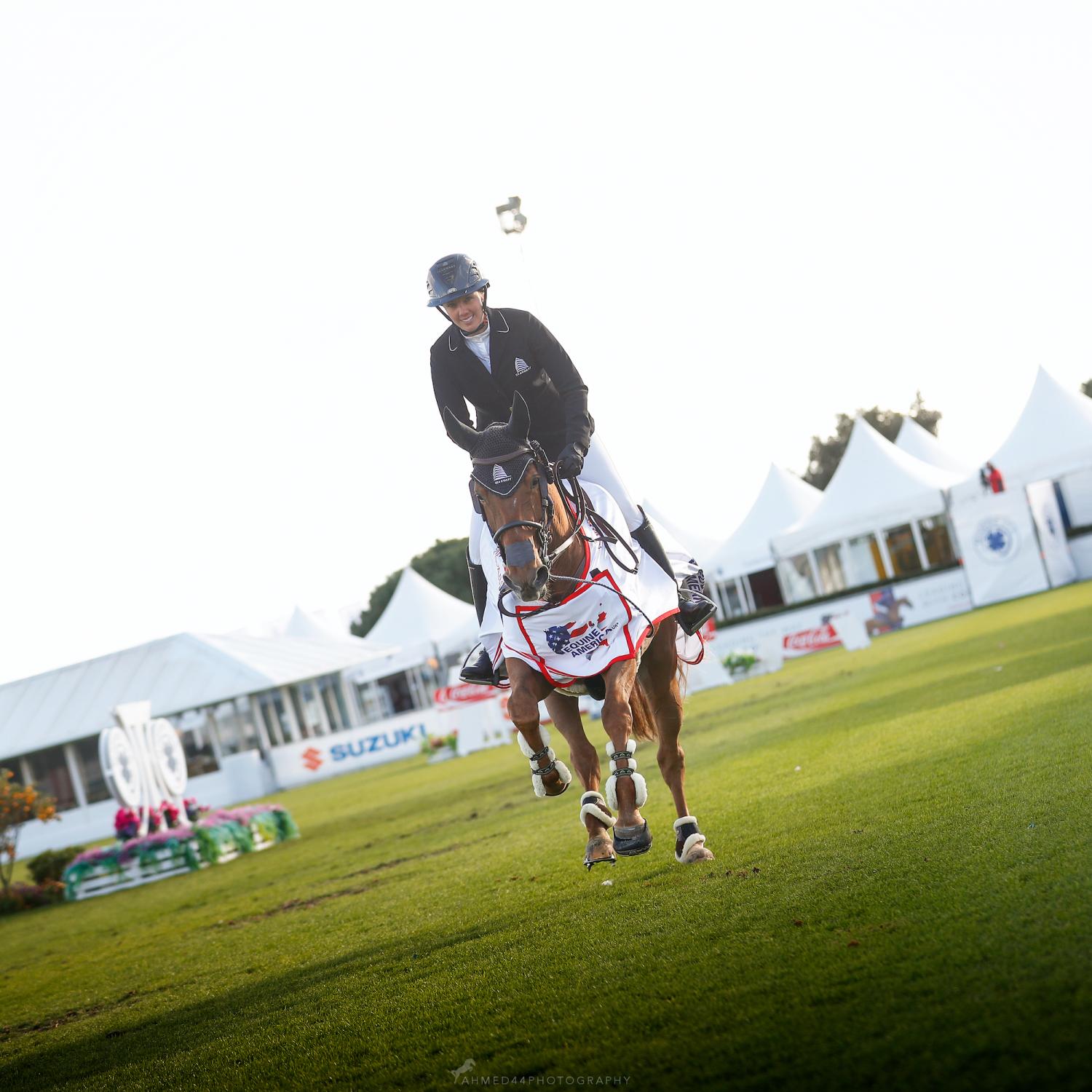 Incredible day of competition with over 133.000€ in prizes and puts an end to the first of the five CSI4*

Torrential rains that fell this morning really threatened to affect the celebration of the Equine America GP.  The David Broome main arena is grass and today it demonstrated its amazing quality and enormous capacity to absorb water and drain it away really fast, allowing the most important class of this week to take place as planned.

This CSI4* Grand Prix was sponsored by the leading makers of horse supplements, Equine America.  The course’s maximum height was 1.55m, and consisted of 13 jumps and 16efforts.  The class had nearly 60 entries with just 9 managing to jump clear in the first round.

Two Belgium riders took the top places, with the amazingly fast and neat rider, Gudrun Patteet taking complete control of the jump off riding “Sea Coast Kashmira Z” when there were just a couple of riders left to go.  Jérôme Guery who won last week’s GP, was riding “Grupo Prom Diego” today.  He went in after Gudrun and really chased her time but couldn’t quite catch her.  However as he crossed the finish, he was wearing a very broad smile and was clearly delighted with his gelding.

Gudrun told us “The mare I was riding today, “Sea Coast Kashmira Z” has more experience than the horse I was riding last week and this clearly allowed me to ride stronger and faster.”

The Course was built by French designer Grégory Bodo. Gudrun’s thoughts on the course were: “when I walked the course I though it was big enough, there were some very big uprights and some very technical combinations.  I thought it was a very well built CSI4* Grand Prix course.”  Gudrun also noted that the last line of fences  “was very difficult with a very short distance from an oxer followed by a very difficult combination.  I think there were a lot of faults at this part of the course.

Douglas Lindelöw, the Swedish rider that won the Medium Tour Grand Prix yesterday, also shone today riding a beautiful fast and rhythmic clear in the jump off with “Casquo Blue” and they finished in third place.

The 1.45m Big Tour class was extremely competitive with some very fast riders taking the podium places.  Once again Richard Vogel was in top position, this time with “Morton V’tMerelsnest” a 9yr old BWP gelding.  In second place was the British rider, Emma Stoker who is based in Belgium.  Today she was riding “Cornetboy”.  This gelding was competed before by Ignacio Montesinos from Chile and took part in the 2019, Pan American Games in Lima, and then went to Axel Verloy. Third place was taken by a regular British rider and winner here at the Tour, Matthew Sampson.  Today he was riding the gelding “Chacco Boy” who is by Chaccomo.  Matt has only been riding this horse since last November and they started off their competitive career here at the Autumn Tour.

Another star class was the Small Tour Grand Prix which took place under really difficult atmospheric conditions in pouring rain, in the Milton Arena 5. Despite this 53 horses took to the course with just 5 managing to jump clear.  In the end Juan Ramos from Argentina, with the 13yr old stallion “Iorio”, were the only combination to jump clear in both rounds and they won the class.  “I am really happy!  There was a moment when I was wondering whether to compete or not because of the rain but the surface was so good and in the end that really encouraged me to take part.  The result couldn’t be better and I really liked the course design”. Juan told us that he has had “Iorio” since last year and  “I brought him from Marie Demonte in France.”

Stanislas de Malet with “Urican” were second in this class and sliding neatly in to third place just behind was Czech rider, Mariana Michlickova riding  “Leeve Jung 2”.

Sameh El Dahan, who is from Egypt was the winner of the 1.40m Medium Tour class riding “Argentah” who is and 11yr old by Argento and registered in the anglo-european studbook.  This 36yr old rider, who as a young man wanted to dedicate his life to medicine, is now a well known International rider with 5* success.  He is based in Ireland at the Sycamore Stables with Joanne Sloan Allen.

In second place in this class was Luca Moneta with “Chilli 41” and in third was Wilm Vermeir with “N-Joy van ‘T Hellewater”.

This finishes off the second week of competition at the 27th edition of the Sunshine Tour. Tomorrow the Young Horses will compete as they finish off their qualifications and prepare for their Finals that will be held on Wednesday.

If you wish to rewatch any of this weeks classes they can be found on the official channelClipMyHorse.TV.