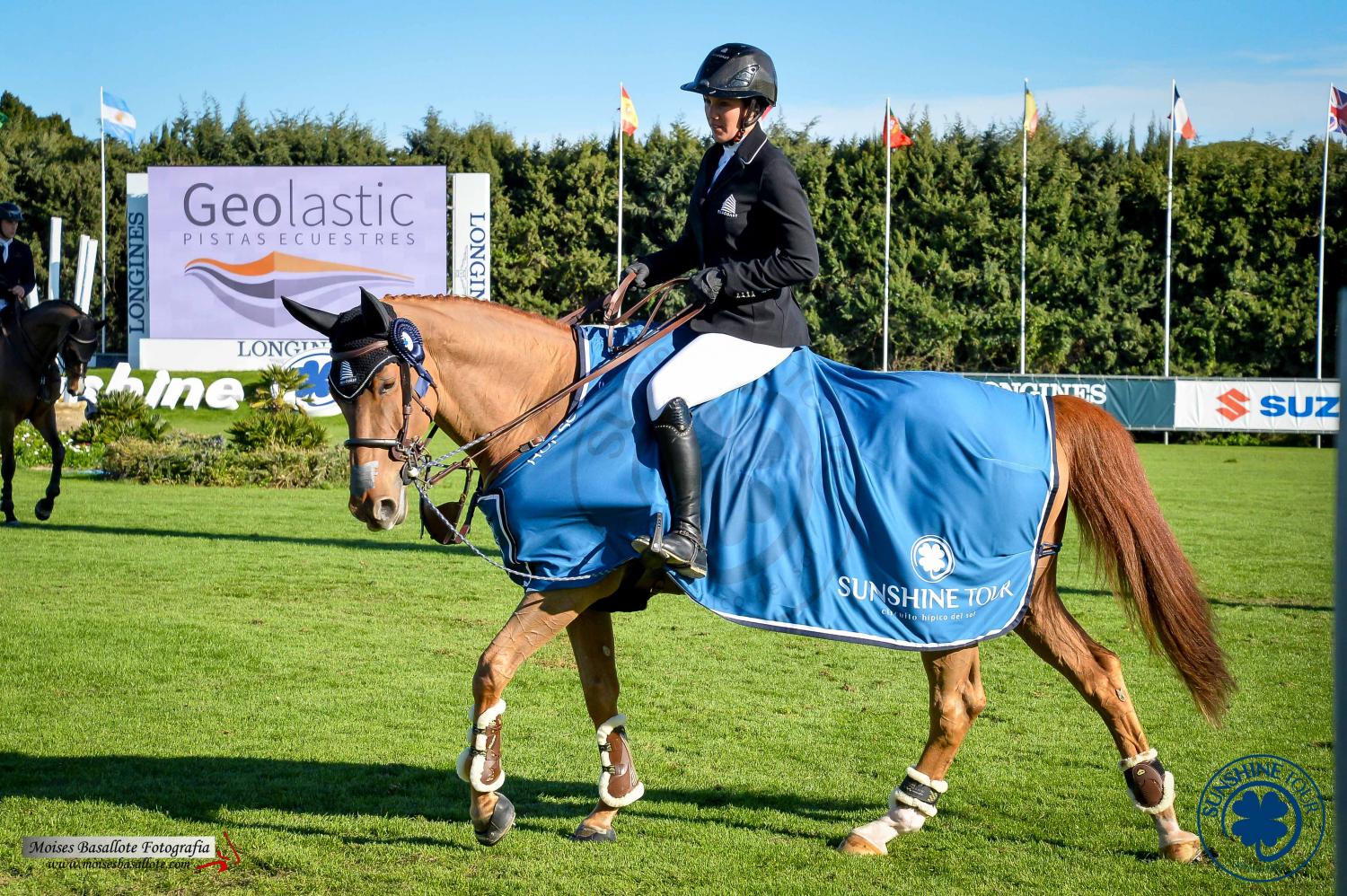 Two Longines Ranking FEI classes and more than 65.000€ given away in prize money

Geolastic is the company that a specializes in the construction of equestrian arena surfaces and who built the new Retina Z ring’s ‘Ebb and Flow’ system.  The company maintains all of the artificial surfaces here at the Dehesa Montenmedio and today Geolastic, were the sponsors of the first FEI Longines Ranking class of this edition of the Sunshine Tour.  Today’s winner was a Belgian rider regularly seen on the podium here at the Tour, Gudrun Patteet with her very fast mare “Sea Coast Kashmira Z”.

After receiving the Trophy from the Director of Geolastic, Guillermo González Eguinoa, Gudrun told us “It seems like my mare really likes this arena!”  It’s not the first time that this pair have won similar classes in this arena, just last year they were the winners of both the Grand Prix class sponsored by Horseware and also the GP sponsored by the Diputación de Cádiz. “My mare jumped really well both in the first round and the jump off.  I’m very happy with her.  The track was big enough but comfortable for the horses and rode well.” Gudrun told us she plans to “compete in the Horseware GP on Sunday with Monalisa, who needs to continue to build up her experience and in the Equine America GP, in the second week of the Tour, I will ride Kashmira”.

There were 14 clears in the first round of this 1.50m Big Tour C class.  The track was designed by Louis Konickx.  Second place was taken by Kim Emmen on her very consistent “Warriors Glory” and in third place was Richard Vogel riding “Floyo Vdl”.

“Billy Cool” who competed a few years ago here at Dehesa Montenmedio with William Funnel, was today’s winner with his current rider Johan – Sebastian Gulliksen in the Big Tour, 1.45m class. In the Big Star arena, the Brazilian rider Joao Victor Castro took the top spot with “Touch of Class 17” in the 1.35m

The Medium Tour also had an FEI Longines Ranking class today. This was won by the Number 1 ranked rider in the world, Steve Guerdat riding “Ulysse des Forets”. Just behind him on the scoreboard was the British rider Matthew Sampson who is a seasoned regular here at the Sunshine Tour. He told us today, “My horse “Curraghgraigue Obos Flight” is very fast and careful.  The class was very fast and competitive and I couldn’t be happier with the result, we also won the 1.40m class yesterday.” This is the first competition for both horse and rider in this new season.  “After the Autumn Tour the horses were well rested and we got them back in shape ready to come and compete here.”  Third place was taken by another top rider, the brilliant Jérôme Guery from Belgium riding “Eldorado WPZ” who is a 9yr old Zangersheide by “Eldorado VD Zeshoek”.

Spanish riders did very well in the Small Tour today with Patricia Segura, a pupil of Italian rider Luca Moneta, winning both the 1.35m and the 1.30m with “Valseuse de Terlong” and “Venu Tot” respectively.  Javier Gónzalez Fragawas the winner of the 1.40m with “Bubalu”.

Tomorrow, Saturday 13th, starts off with the Big Tour 1.35m at 09.00.  All classes can be followed live on ClipMyHorse.TV, on the Sunshine Tour web page or on the mobile App.