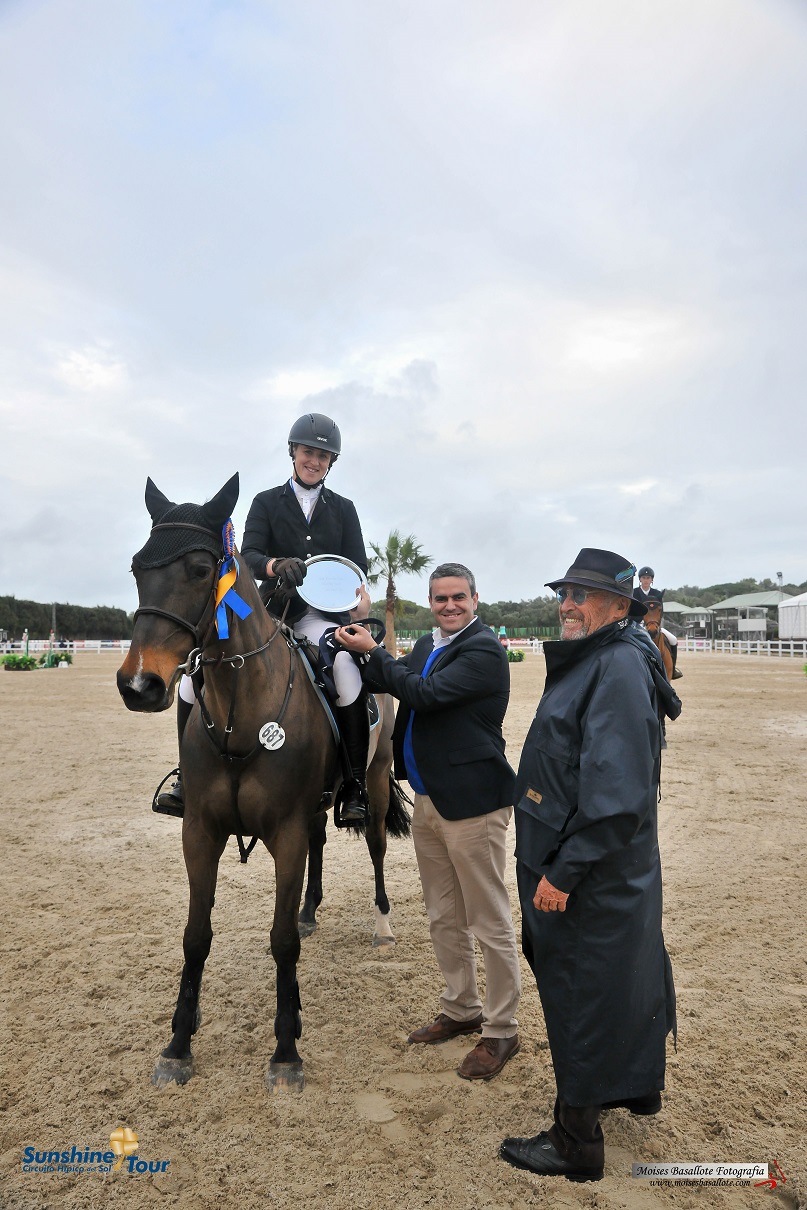 Tomorrow is the Big GP class with 65.200 euros in prize money.

Today at the tour, the well known British rider Holly Smith was the winner of the FEI, Longines Ranking Small GP. This class was sponsored by the Ayuntamiento de Vejer. Riding April IV, a horse she has only recently started to compete; she topped the board beating the 18 riders that got through to the jump off in this demanding class. Their time was just 37.90sec and though many tried to best it, it proved unbeatable. The very last rider to go, another well known Brit, Joe Whitaker and his super horse Viirginia, were the closest and took second place in 38.08sec. The Swedish rider Angelie Von Essen and Creme De La Creme 6 took third place just behind in 38.35sec. Three British riders took 4th to 6th place; William Funnell riding Billly Fanta; Daniel Neilson riding Newton Nickel and John Whitaker riding Udget du Rozel.

In the 1.40m, Big Tour B class there was a win for the Egyptian rider Abdel Said for the second time, with Beauminka. Second was the Belgian rider Stephanie Andries on Javenia and third, and once again in the rosettes, was Holly Smith with Quality Old Joker.

The Big Tour A2 was won by the British rider Chloe Winchester with Sportsfield Our Clare. In second place, the Moroccan rider Amin Lyazidi on Medena and Abdel Said was once again on the podium; this time riding Daranta and taking third place.

The top three winners in the A1 were British, with Matthew Sampson on Billy Republic in first; Jordan Gann on Lakeland Dancer in second; Ben Walker on Kimba Classic in third position.

The Medium Tour C was won by the French combination, Thomas Rebotton on Conte Du Rouet. In second was the Spanish rider, Alfonso Arango on Ursula D’Auge and in third was Jodie Hall Mcateer (GBR) on Ninkie De VY Z. In fourth was Georgina Crumley (GBR) on Aifa O.L and fifth was Iván Serrano (ESP) on Vesuvio Tame.

In the Medium Tour B, Kayleigh Watts (GBR) on Fashion V had a very fast round and took the top of the podium. The Dutch rider Anoek Van der Pluijm was second on Elcapone and in third, was the Irish rider Emily Turkington on Legend.

In the Medium Tour A, there was an Irish win from Harry Allen riding Eh Quick Nina. In second was the Spanish rider Jacobo Ussia de Garay on Vicomte De La Cour; and in third was the British rider Pollyana Gredley on Unex Omega Star.

The winners of the Small Tour Classes were: Kerry Grimster (GBR) on Boombastic; Maria Ida Loro (ITA) on Tadi and Hollie Pearce (GBR) on Ryans Hollie.

The CSI 4* show continues tomorrow with twelve classes, three of which are FEI Ranking classes and we hold the biggest class of the week the Big Tour D GP with 65,200 euros in prize money which will start at 11:00 (WP).