‘Imposant van de Renger’ & Rodrigo Almeida, stun the crowds with an exemplary performance in the GP 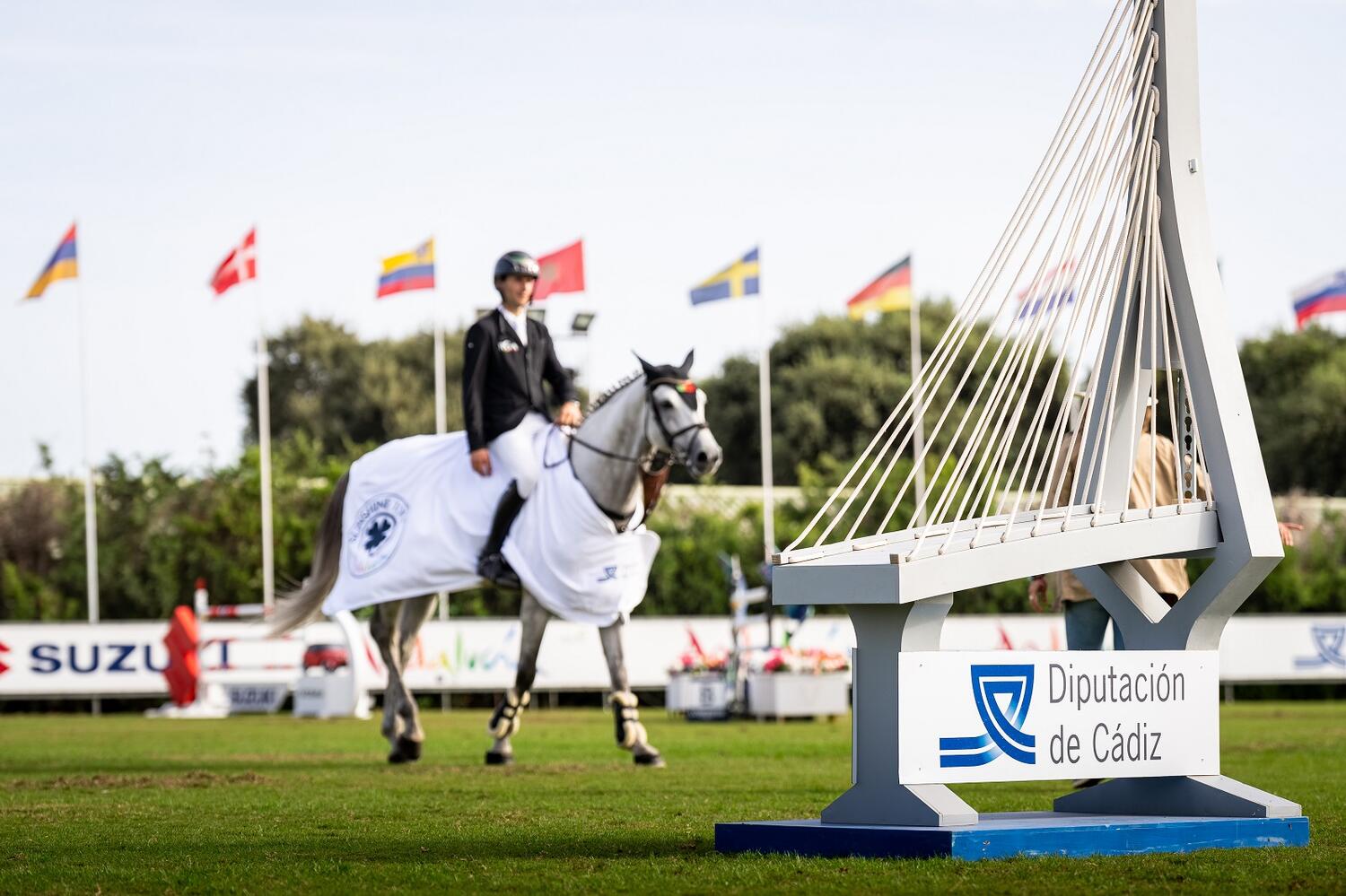 The Portuguese rider wins this CH-EU-S 2023 qualifier in great style in a 16 horse jump off.

The jump off course today was demanding and competition was fast, the run to the last fence was long, and it was gong to take a very balanced horse to gallop all the way and fly over the last upright to win the class and that is exactly what ‘Imposant Van de Renger’ is extremely good at! We interviewed his very talented Portuguese rider,  Rodrigo Almeida Geisteira after the class and he told us;

‘Last week on the 14th, he was second in Rabat in the World Cup CSIO4*-W. So we were well prepared for today. He jumped really well in the first round ’.  Rodrigo went on to tell us that; ‘he felt he could really ride him to win in the jump off’.

He clearly thinks very highly of this beautiful grey, nine year old stallion.  He is bred for the job, his sire being ‘Comme il Faut 5’ who is himself by the legendary, ‘Cornet Obolensky’ and whose stunning good looks ‘Imposant Van de Renger’ has inherited, as well as his superb talent, add in ‘Cor de la Bryere’ in his dam sire line, and the quality just shines through.  His jump-off round was textbook, his balanced turns were immaculate, and the smooth forward pace this pair kept up, made the round look deceptively easy and slow! In the end they stopped the clock in 42.49s way ahead of the Swedish rider Erica Swartz, who came second, with just under three seconds in hand! Rodrigo told us that the horse is very young and he ‘intends to give him all the time he needs to develop his craft, as the horse has amazing potential’ .

Erica Swartz was riding the very athletic mare, ’Madonna’ today and they were the leaders for a good while on 45.64s, in the class. Their impressive round looked like it was not going to be beaten. The mare is owned by Cecilia Swartz and by ‘Verelst Flamenco de Semilly’. In the end they were placed second, just beating the world renown Irish rider, Billy Twomey with the lovely ‘Chat Botte E.D’ who is by ‘Casall’, dam sire the famous ‘Darco’, into third place on 45.76s. Right on Billy’s heels was another Portuguese rider,  Luiz Felipe de Azevedo with ‘Sierra du Piedroux Z’ who stopped the clock in 45.78s!  In fifth pace was American rider, Paris Sellon with the lovely chestnut mare ‘Attoucha’ who is well known here at Montenmedio and a regular in the rosettes. Jaime Armario, from the sponsors of this class, the Diputado de Deportes de la Diputación Provincial de Cádiz, gave out the prizes to the winners.

Spanish rider Jesús Garmendia Echevarria had a great day, again winning the 1.40m with ‘Valut 2’. Second was the American rider, Cathleen Driscoll with ‘Magnolia’ and in third was Canadian rider,  Rebecca McGoldrick with ‘Horatio Van Erpekom’, the only three riders to stop the clock in under 67s.  In fourth was the Japanese rider, Yuko Itakura with ‘Stakkatisa PS’ and in fifth was Brazilian rider, Silvio Teixeira da Silva with ‘Donner’.

Luca Moneta with ‘Jolie Coeur D’Avril’ won the 1.35m, second was Rodrigo Almeida this time he was riding, ‘Epure de B’Neville’. British rider Will Edwards was third with ‘Magic Chanti’; fourth was Iván Serrano (ESP) with ‘Gold Empire’ and finally in fifth was the Danish rider, Theodor Linde with ‘Jaguar’.

Our other winners were; in the 1.25m, Kayleigh Watts (GBR) who is never off of the podium with ’Whisper of Joy’;  the 1.10 was won by Swedish rider, Monica Stööp with ‘Cinini I JJ Z’.

Next week we eagerly await the Nations Cup which will take place on Friday, with 15 nations taking part. On Sunday the two Grand Prix classes for the CSI2* and the CSIO3* will take place and across the week there are five Longines Ranking classes.  A superb climax to this event, where 600 riders, 1.500 horses will have competed from across 36 countries and where over 600,000 euros in prize moment will have been won!