In the Big Tour 1.50, Kevin González de Zárate and ‘Conthargos Rouge’ have the fastest time 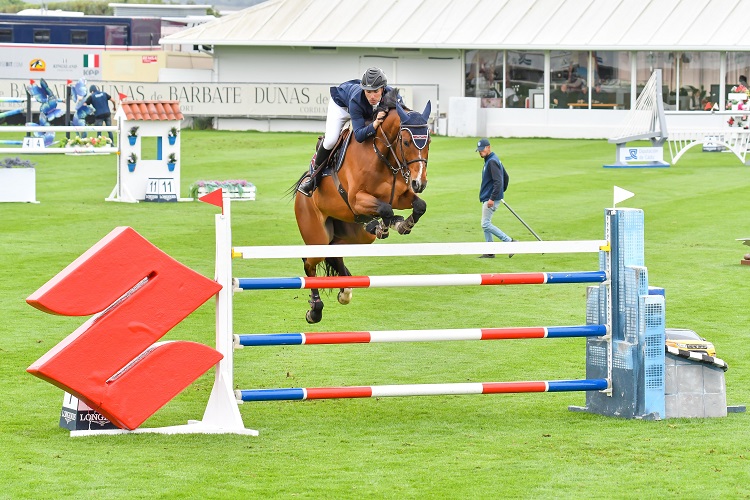 The first Longines Ranking class in this, the sixth week here at the Andalucía Sunshine Tour, was extremely busy today with 113 entries and in the end, the results were split.  One of the winners, who had the fastest time of the day, was Spanish rider,  Kevin González de Zárate with the 12yr old,  ‘Conthargos Rouge’ owned by Yeguada Valbanera, by Conthargos x Papillon Rouge.  Their time in the class, which was in the main grass arena, was a mere 33.74s.

Sharing first place, but stopping the clock in 34.36s was top British rider, Holly Smith, with her own, ‘Fruselli’ (Zambesi TN x Karandasj).  These two have already had two second places here, one in the Medium Tour 1.45 Ranking class and the Andalucía GP Ranking class.

The Big Tour 1.35 was another class with a lot of entries and again the results were spilt. The fastest time in this class and one of our winners was, Michael Duffy, for Ireland,  a great way to celebrate St Patrick’s Day!!  Michael was riding ‘Lumbumbo’, who is by ‘Ludwig Von Bayern’ and they stopped the clock in 57.21s.  The other top spot went to the Spanish rider Alejandro Álvarez Gutiérrez with ‘Little Chap S’ who is by ‘Chap 47’,  in a time of 57.59s.

Second places were taken by Norwegian rider, Maria Louise Kingsrod with ‘Orlando Van Klapscheut’ and Radovan Sillo (SVK) with ‘Leonardo Van’t Heike’.  In third were Rodrigo Almeida (POR) with  ‘Elvic V/H Hoeve-Terras Z’and Dutch rider Kim Emmen with  ‘Icloud’. Again the Irish were top of the podium in the Medium Tour.  This time it was Michael Pender riding the very successful ‘HHS Fortune’ who is owned by Marion Hughes.  They stopped the clock in this 1.45m class, in just 57.40s, well ahead of William Whitaker (GBR) with ‘Jalellah OL who took second place in a time of 60.68s.  In third was another top Irish rider, Billy Twomey with ‘DXB Legend’.  Fourth was Przemyslaw Konopacki (POL) with ‘Conthargos’ and in fifth was German rider Marco Litterscheidt with ‘Robinson’.

The Medium Tour 1.40 class was also split.  Holly Smith was one of the winners and she had the fastest time of the daybed a mile, with her other superstar, ‘Azolette’,  in just 62.74s.  Sharing first place was Katharina Offel (GER) with ‘Elien’ in 64.10s.  Israeli rider, Dan Kremer with ‘Formidable GLN Z’ and Duarte Seabra with ‘Fernhill Holly Chay’ took the two second places.  Marc Bettinger (GER) with ‘Nikita Van de Vlasbloemhoeve’ and Sameh El Dahan(GBR) with ‘WKD Toronto’ took third.

The Medium Tour 1.30 was won by Kim Emmen  with the lovely ‘Fiona’.  British rider, Antonia Platt was second with ‘G Star Blue’;  Dutch rider Doron Kuipers with ‘Isidoor’ was third and in fourth was Marc Bettinger with ‘Bug Bunny’.  In fifth was Swedish rider Sofía Everz Svanberg with ‘Franciscus Sylt E’.

In the YH classes;  7YO section winners were Camilo Rueda From Columbia with ‘Katowice Dakota’ and Adam Botham (GBR) with ‘Cerano Van De Dijkhoeve Z’:  6YO winners were James Wilson (GBR) with ‘Hello Picobello Z’ and Doron Kuipers with ‘Hannibal Style VK Z’.  In the 5YO classes our winners were Austrian rider Bianca Babanitz with ‘My Boy Elvis’ and  Ronnie Jones (GBR) with ‘Ruinart Rose’.

Tomorrow we have 12 classes in the CSI4* and CSI1*.  There are more than 3,500 horses and 750 riders across 53 nationalities here competing at this, the sixth week of the Andalucía Sunshine Tour which is sponsored by the Consejería de Turismo, Regeneración, Justicia y Administración Local de la Junta de Andalucía, a través de Turismo y Deporte de Andalucía.