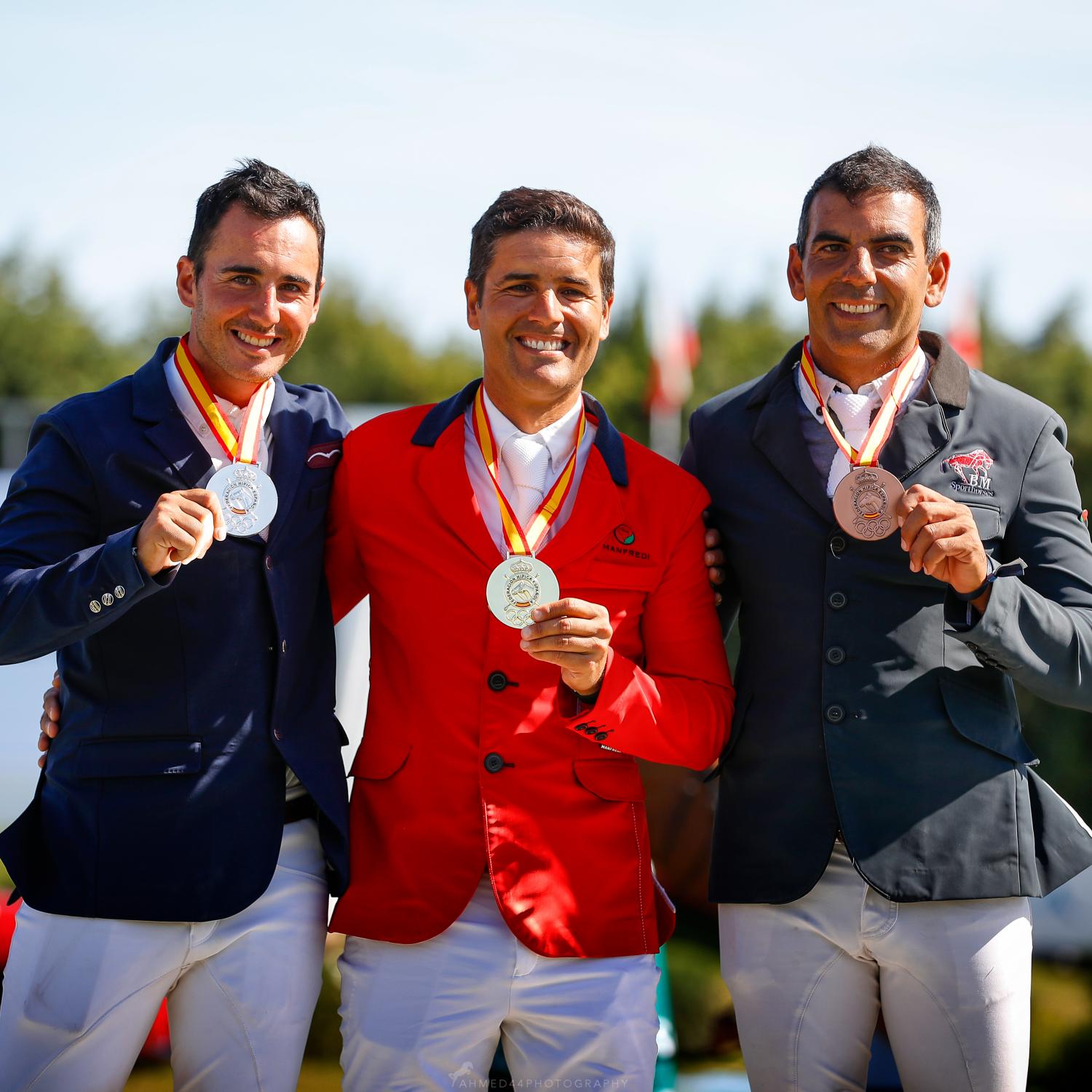 For the second year in three editions of these Championships, the Canarian rider takes Gold!

For the second time in a row, this talented Canarian rider took Gold in the highest section of the showjumping sponsored by Caser Seguros, at the wonderful Dehesa Montenmedio showground.  In 2019 Ismael also topped the podium riding the lovely bay mare Airline R, and today he repeated this triumph by becoming the Absolute Spanish Showjumping Champion 2021.  Today he rode another mare, the wonderful La Costa, who is owned by Iñigo López de la Osa and Axel Verlooy.  Ismael and La Costa are at a peak point in their professional career at the moment, having recently competed in the Europeans and this year’s Nations Cup Final, held last week in Barcelona.

The course designer Javier Trénor did not hold back today for the Final, the track was difficult and consisted of 14 obstacles with 17 efforts. Added to that the weather although sunny and bright, was extremely windy and gusty, making conditions on the course quite tricky for the participants.  The class was full of excitement for the audience especially after Rain Man, ridden by Iván Serrano had one down. This left three riders to go and all three were riding to win a medal.  Álvaro González de Zárate finished on a total score of 6.14 faults  just adding one time fault from his foot perfect round and finishing his challenge on 7.14 faults.  Álvaro and Carte de Blue PS, who is owned by Armando Trapote, were still very much in the running. Mariano Martínez Bastida went in to jump carrying 4 faults and full of hope for a good round with Belano VD Winjhoevez . Unfortunately they had a pole in the last line of fences and adding that to one time fault,   pushed up their score to 9 faults.

Last to go and jumping for Gold was the Canarian rider, they took a pole coming out of the treble but La Costa finished the round with just these 4 faults. Their final score was a mere 5.76 faults leaving them at the top of the podium with Álvaro taking Silver and  Mariano taking Bronze. Jose Manuel Nieto, Bancaseguros Business Director, presented the tray to the winner after the Trophy sponsored by the insurance company Caser Seguros.

The wonderful main arena here at Montenmedio, was also the location for the Final of the Young Ride Spanish Championships.

The course was really demanding and designed by Javier Trenor. The track consisted of 14 efforts and resulted in an exciting competition, with some poles falling from unexpected combinations as the pressure of the Final round came in to play here in Vejer de la Frontera.

Not one of the early riders lower down in the championship results, managed to finish with no faults. This gave the riders who were provisionally in the top three places, a bit more room to maneuver and eased off the pressure just a bit. So the three podium places already appeared to be quite clearly taken and all that was left was for the top three to see which one they could achieve. Natalia Ramírez was the first to go with the amazing  “Macao” finishing off her brilliant Championship campaign with a faultless round and once again adding on pressure on the riders left go.  With emotions running high it really was all up to the next two riders.

Next in was Diego Ramos Maneiro  riding “Texas de Trebompe”. This pair really demonstrated how to ride when the pressure is on. Their round was calmly ridden with great skill, just rattling a plank in the final treble for a moment of tension in the crowd, but in the end they merely added a time fault to their cumulative score, leaving them in at least Silver position.

This left Alex Codina with all the pressure on his young shoulders and he entered the arena, totally focussed on the task ahead.  Alex and the lovely  “My Passion VD Donkhoeve” had a good round but in the end they finished with two poles down and unfortunately this dropped them in to Bronze place. Alex is trained by Manuel Fernández Saro and completed a great Championship challenge clearly demonstrating his progression this season.

In the end it was a really well deserved Gold medal for Diego Ramos and also the rider’s first year competing in this Young Rider category, this is also true for Natalia Ramirez who ended up in Silver position, with  Alex Codina taking the Bronze.

All in all it was a magnificent day for Álvaro González de Zárate, he not only won Silver in the Absolute category but went on to win Gold in the Classic Championship  1.40m class. This took place in the Milton arena and was a challenging track. Not one pair finished the course without faults. The best result today was for Borja Villalón who had just one down with Jay Jay ES but their accumulated score meant they finished  on 30.56, well down the overall scoreboard.

The leader up to this point was Eduardo Álvarez Aznar, who had a very unfortunate mishap just before entering the class and retired the horse from the championship. With all this going on Álvaro González de Zárate and Ricardo Jurado found themselves in much more comfortable positions going in to the last round.

Álvaro and Daino LP finished their challenge with one down and an accumulated score of 10.19 faults whilst the current leader Ricardo Jurado had two` poles with Cadum de Champlouie and finished up on 12 faults dropping them down in to Silver place. Bronze was won by Jesús Garmendia and Valut 2.