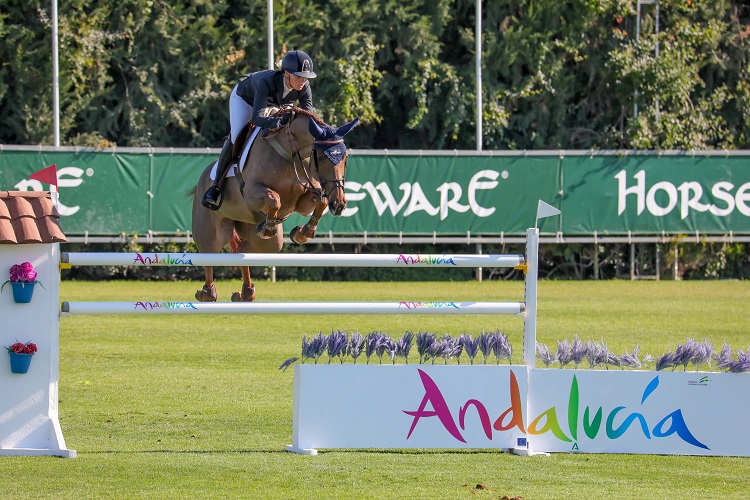 More than 1000 horses took to the rings on this perfect day, here at the Andalucía Sunshine Tour

It was a stunning day here today in the second week of the Andalucía Sunshine Tour, both the weather and the jumping were just perfect.  The Big Tour class, a qualifier for the Sunday Grand Prix, was almost a showcase for Germany.  3 riders out of the top 4 were German and only the French legend that is ‘Bosty’, managed to break the run.  The winner of the class was Jana Wargers,  who had a cracking round with ‘Chacco’s Lady 2’, their time in the second phase was very fast just, 28.76s.  The mare is ten this year and has bloodlines to dream of.  She is by the incredible ‘Chacco-Blue’ with the dam sire,  ‘Indoctro’ and she just oozes quality and a is great example of the horses that are owned by Ashford Farm & Jos Lansink Horses.  She has already had great results here at the Tour with a second place in the 1.50m, Medium Tour GP on the 13th of this month.

In second place was double Olympic rider, Roger Yves Bost, fondly know as ‘Bosty’.  Bosty was part of the French Team that won the Rio Olympics and has competed in numerous WEG and World Cup Finals, his current world ranking is 107.  Today he was riding ‘Cassius Clay VDV Z’  (Calvino Z) , and took second place in 29.43s fending off a German whitewash at the top of the leaderboard.  In third was Jens Baackmann with ‘Nomanee’ and in fourth was Laura Klaphake with ‘Davenport VDL’.  Fifth place was taken by Columbian rider Carlos López Lizarazo with the lovely ‘Admara 2’.

The 1.35m Big Tour class was a split class with duplicated prizes and two riders in each placing.  In this class there were a notable number of French riders on the podium.  The winners of the sections respectively; were Irish rider Anthony Condon with ‘Creevyquinn Pearl’ and French rider  Pierre Alain Mortier with ‘Astings Du Busson’.  Second places went to French rider Olivier Perreau with ‘Ardan de Maucourt’ and Bulgarian rider, Konstantin Van Damme with  ‘Konique D’Houtem’.  Third places were;  another French rider, Yann Chartier Capitaine with ‘Caepten 2’ and the Columbian rider, Nicolás Toro Linares with ‘Baloubelle’.

The 1.45m Medium Tour, class was also split due to the sheer number of horses competing.  Our winners were;  Belgian Dries Dekkers with ‘D&J Havanna’ who have been doing well here already and, once again in the rosettes, Carlos López Lizarazo this time riding ‘G&C Arrayán’.  In second were Michael Hughes with ‘Bambou de L’Yserand’ and Swiss rider, Aurelia Loser with ‘Anaba Haize’.  In third were;  the Belgian rider, Dominique Hendrickx with ‘Vintadge de la Roque’ and the Italian rider,  Ricardo Pisani with ‘Seronera’.

The 1.40 Medium Tour, was again a class of two parts.  In first positions were;  the Irish rider Adam Morgan with ‘Warriors Glory’ and German rider Katharina Offel with ‘Elien’.    Second places;  went to British rider Adam Botham with ‘Ebanking’ and American rider, Adam Prudent with ‘Brume Barbotiere’.  In third;  another British rider, James Davenport with ‘One Way ’and the Belgian rider, Ignace Philips De Vuyst, with ‘Only Special Van Dobby-Home’.

Alexa Larkin (ITA) had another top result in the 1.30 class with the lovely ‘Lady Angeles’ along with Argentinian rider Eduardo Pérez with ‘Carentino Z’.  The two second places were taken by Irish rider, Lucinda Roche with ‘Izar LB’ and British rider Mark Wildish with ‘Jupiler’.  Third were; Kevin González de Zárate for Spain with ‘Jacmel’ and another well known British rider, Ashlee Harrison with ‘Daham’.

The Young Horse classes were also held today.  In the first 7yr old section, the winner was Bianca Babanitz from Austria, who has had an amazing week of great results here at the Andalucía Sunshine Tour, with ‘Bella E Impossibile BBA’.  In second was British rider, Emily Sage with the appropriately named ‘Cadiz Z’.  In equal third were Spanish rider, Pello Elorduy Ibarzabal with ‘Furiazzo de L’Aubree’ and Swiss rider, Martin Fuchs with ‘Pina Van de Moerhoeve’.

In the second 7yr old section the winner was Anthony Condon with ‘Bellevue Celestial’,  Manuel Thiry from Belgium was second with ‘Flagship de Hus’ and the Italian rider Ricardo Pisani with ‘Chacco’s Lawito PS’ was third.

The 6yr old class had two sections; local Spanish rider Carlos Bosch Cebrián had a second consecutive win with ‘Jolie Van der Berghoeve’.  Second was British rider, Max Routledge with ‘Ascadina PP Z’ and third, another Spanish rider, Enrique García-Gallardo with ‘Can’t Stop de Bo Z’.  In the second section this class, the winner was Ignace Philips de Vuyst from Belgium with ‘Grenoble de Riverland’, a horse we are now accustomed to see on the podium, having won two other classes and with a second place already this Tour.  Second today was another Belgian rider who has also had a great week here, Manuel Thiry with ‘Quibelle’ AEG’.  Third was successful rider, Bianca Babanitz with ‘Chicago Freestyle’.

The 5yr olds also jumped today in a 2phase special set at 1.10m.  In the first section the top three were;  Manuel Thiry with ‘Daredevil Z’,  Mackenzie Ray (GBR) with ‘Toblerone OS’ and Patricia Segura (ESP) with Hevea Star’.  In the second section we had Marta Garat Macias (ESP) with ‘Nasa del Amor’, second was Louie Cunningham (GBR) with ‘Colossus HD’ and finally in third was Victoria Gulliksen (NOR) with ‘ Coldplay Z’.

Today was the Last day for the Young Horses and they will be back in the arenas next Tuesday with thoughts on the Young Horse Finals, that take place on Wednesday the 23rd of February.  In order to qualify for the Finals, each horse must have a sum total of four clear rounds, which many have already achieved and their places in the Finals are now guaranteed.  Those needing one last clear will jump on Tuesday in their classes with hope to qualify and Tuesday’s classes, will also act as a warm up class for Wednesday’s Finals.

This weekend we have a dozen classes including those of the CSI1* and the CSI4* each day.  There are five FEI Longines Ranking classes this weekend.

The show ground is open to the public with free entrance and parking.  There are five restaurants where you may enjoy the fabulous cuisine of the area and watch the jumping as you eat.  There is an interesting shopping area, mainly equine themed, but with many other products on offer, including a variety of clothes and accessories.

If you cannot attend, the event is streamed live on our website sunshinetour.net and through our Sunshine Tour App.