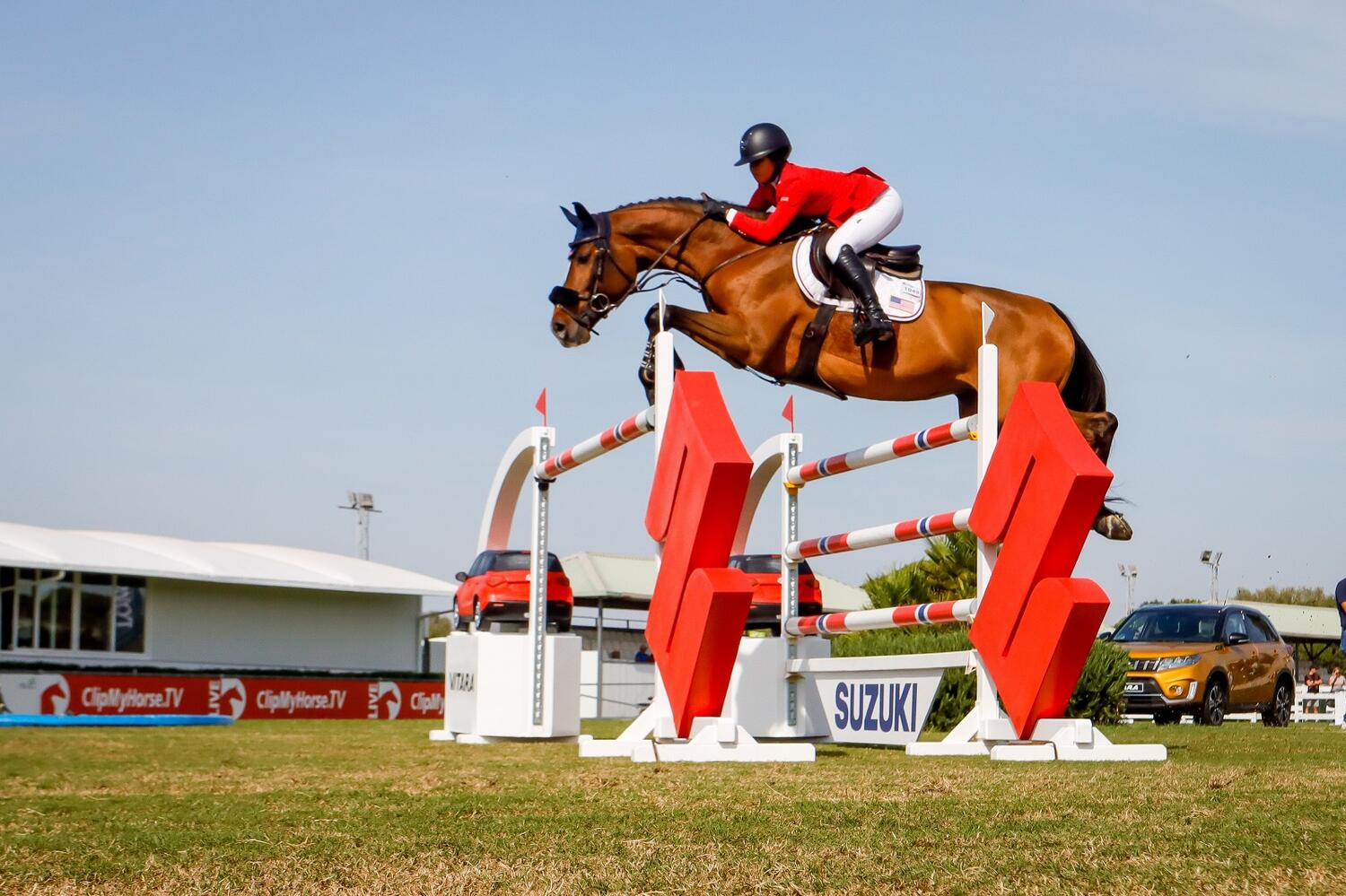 Mimi Gochman and ‘Celina BH’ rise to the occasion and fly around the Yeguada Cartuja sponsored 1.50m class

Grant Seger wins the 1.45 with ‘Cantucchini’. In the 1.40m the top two were Italian riders, Luca Moneta and Christian Fioravanti

The CSIO3* 1.50m class was sponsored by Yeguada Cartuja and had almost 60 entries. It was a 2Ph class and a qualifier for the Grand Prix tomorrow. Quite early on in the class, home based rider Armando Trapote Mariscal, the current Spanish Absolute Champion, took the lead on the amazing speed jumper, ‘Tornado VS’ who is an 11 yr old gelding by ‘Toulon’, dam sire, ’Contender’. His round looked like it was going to be very hard to beat as he stopped the clock in 29.87s, but in the end this talented pair had to make do with third place.

Our winner was Mimi Gochman who really stepped up her game today with the lovely mare, ‘Celina BH’ and took the lead, stopping the clock in 27.89 seconds, the only pair to finish clear in under 28 seconds. ‘Celina BH’ is 12 and by ‘Canstakko’, dam sire, the amazing ‘ Carthago Z’ and she is owned by Gochman Sport Horses.

In second place was Kevin Gallagher for Ireland, who was riding ‘Ballypatrick Flamenco’ who is by ‘Je t’aime Flamenco’, and owned by Greg Broderick.  They had a cracking round and stopped the clock in 28.99s, their best result so far here at the Tour.

In fourth place was British rider Louise Saywell with ‘Kingsborough Kasper’, who is by ‘Kannan’ and in fifth was the Polish rider, who has also been doing well here at Montenmedio, Andrzej Oplatek with ‘Diaroubet’.

In the 1.45m, Grant Seger and ‘Cantucchini’ won the class with great flair in 63.88 seconds. ‘Cantucchini’ is a gelding by the stallion ‘Cloney’ and owned Grey Fox Crossing and this is their best result so far here at the Tour.  Grant was delighted with todays’ win as well he should be, beating off a very serious challenge from the Swedish rider Erika Lickhammer-van Helmond. Erika took both second and third places in the class, on two mares, ‘I. Comme Tessa VHL’ and, ’I’m a Dancer’. A great day of jumping for Erika.  In fourth was Canadian rider, Kyle Timm with ‘Flexible Flight’ and in fifth was well known Spanish rider ‘Cayetano Martinez de Irujo’ with his own gelding, ‘Dito’.

In the 1.40m Italian riders took the top two places on the podium, Luca Moneta with ‘Jolie Coeur D’Avril’ and Christian Fioravanti with ‘My Boy Z’.  Hot on their heels in third was Belgium rider, Jeroen Appelen with ‘Neverland Z’. In fourth was another Italian rider, Andrea Calabro with ‘That’s Me Z’ and finally in fifth, was the very successful Irish rider Niamh Mcevoy with ‘Lisboy Louie’.

In the CSI2* 1.40 Cian O’Conner rode a brilliant round, winning the class with ‘Mangoon’ in 27.50s.  ‘Mangoon’ is a stallion by ‘Messenger’ and is owned by Ronnoco Jump Ltd.  In second place in 27.89s was Luca Moneta, this time riding ‘Chilli 41’ who is by ‘Crunch’.  In third was Spanish rider Patricia Segura with ‘Venu Tot’ in 27.97s. Fourth was Peter Bleaker Jr with ‘Jirsinaa’ for Switzerland and in fifth was the Danish rider, Theodor Linde with ‘Kristal’.

In the 1.35m we had a Czech win from Sara Vingralkova with the gelding ‘Damocles From Second Life Z’. Second was Spanish rider Oliver Lange Fraile with ‘Flying Pleasure’ and third was Abbie Crippen (GBR) with ‘Billy Kvitfjell’.

The 6yr olds jumped today in a 1.30m class and once again Niamh Mcevoy was up on the podium, in first place with ‘Triple T Calamando Blue’ by ‘Calamando’, who is owned by Gary Hazelwood. This is this pairs third win here at the Andalucía Tour.  Second was top Spanish rider, Santiago Diaz Ortega with the lovely ‘Quenala T’ and in third was Kara Chad from Canada, with ‘Gability van de Eijkhof Z’.

These are the top results from a very busy day here at the II Andalucía October Tour, which is sponsored by the Consejería de Turismo, Cultura y Deportes de la Junta de Andalucía, and co financed by the European Union.

Tomorrow is the last day of the Tour and both the CSOI 3* and 2* GP classes will be held. These  are Longines Ranking Classes with the 3* also being a qualifier for the 2023 European Championships and the highlight class of the whole Tour.

There are also three other 2* classes running alongside the GP’s and we hope that you may visit and watch the action live here at Montenmedio.  If not, you can watch live and for free on the Sunshine Tour app and on our website, www.sunshinetour.net, through ClipMyHorse TV.