It’s an Irish victory in the Pavo Trophy class. 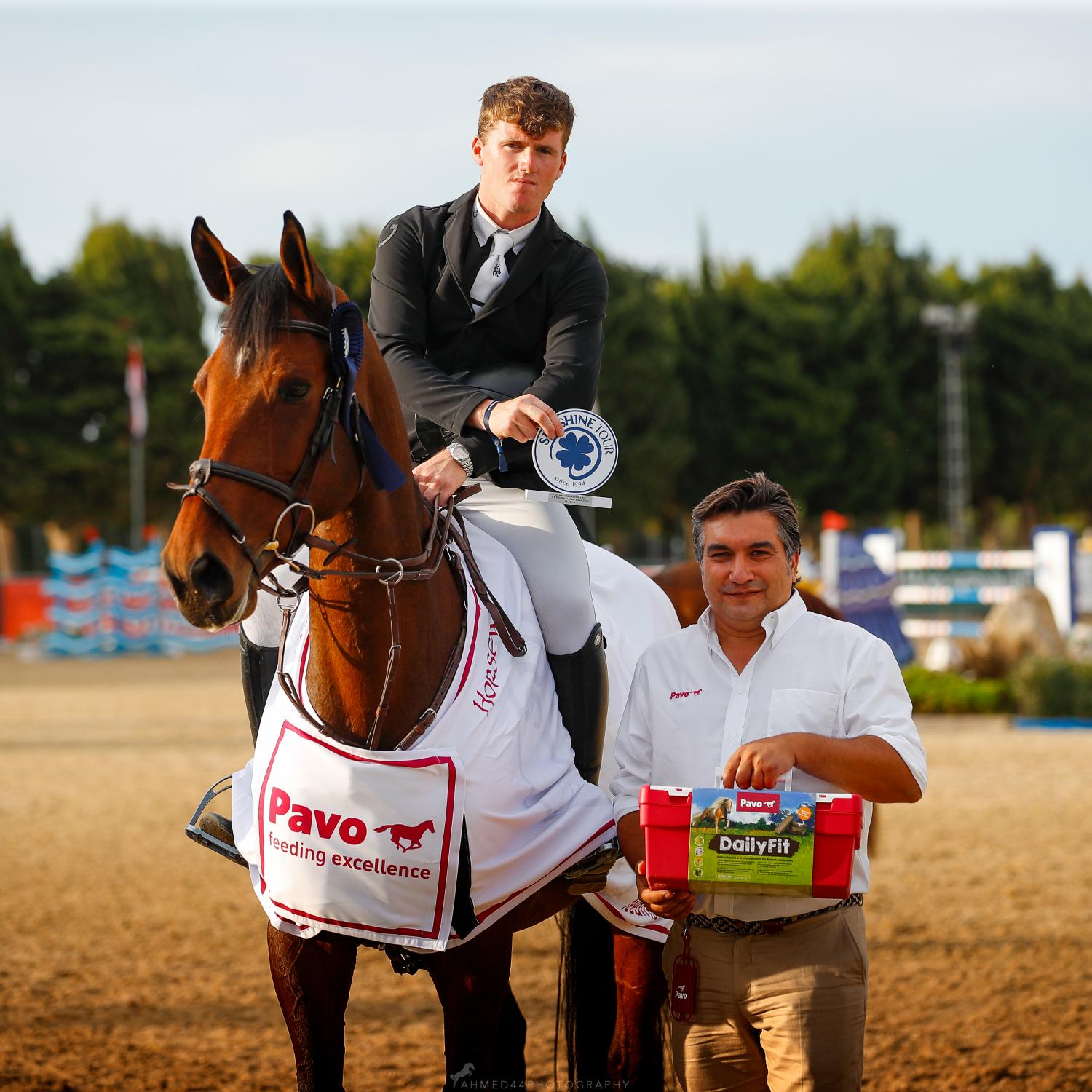 The 21 year old Sean Monaghan may be young  but this very experienced Irish rider has a great track record, which includes such events as back in 2016, he was a winning team member of the under 21 Pony Nations cup in Denmark, in May this year he won the Gain National GP in Cavan and he also won a Silver medal in the FEI U21 Europeans in Portugal this July.

Today he was the winner of the 1.40m Small Grand Prix,  sponsored by Pavo feeds and supplements.  It was a big class with 78 combinations taking to the Milton arena with just 18 going clear in the first round.  Today Sean was riding the 8yr old mare, EMS Adelaide owned by Daisy Duggan, with whom he has already had so much success and once again they pulled off two text book rounds which were much enjoyed by the audience.

In second place there was another Irish bred horse, also an 8yr old, ridden by Charlotte Jacobs for the USA.  Rincoola Milsean, by Aldatus Z and with the dam sire the very famous Cruising.  This horse has had very little International experience so far and the pair made a successful debut together in Ireland this August, with good results all round and some finishes on the top of the podium.  Charlotte is in her second summer season here in Europe and is based in Ireland with the brilliant rider and trainer Greg Broderick.  Charlotte told us that she hopes she can return to Europe next spring after spending winter in the USA.  In third place was the British rider Joseph Clayton who really stepped up to the mark with two great rounds on the mare Cally V who is owned by Michael Whitaker.

It really looks like no one can stop the Spanish rider Ainhoa Manero in the CSI2* Medium 1.35m class!  She really couldn’t be having a better or more memorable show so far.  Ainhoa is becoming a phenomenon here in the arenas with no real challenger close to her amazingly fast times. On Thursday she won the class with the 16yr old gelding El Fortin, who is a Zangersheide de 16 años and today they repeated their win, whilst giving a master class in speed riding and finishing almost 2 seconds faster than Maryk Shaney who took second place.  Yesterday Ainhoa rode the lovely 14yr old Anglo Arab mare to victory Turquoise D’Ivraie.  There really is not stopping her!  Three classes and three wins.

In second place also with a fast neat round was the Indian rider Maryk Sahney.  Today he was riding the aptly named gelding Flyer B into a well deserved second place improving their placing as they were 4th in this class on Thursday.  In third today was the Italian rider Camilla Vittadini riding another gelding, Danube de Hus.

The 1.30m Medium class was once again won by Commandant Geoff Curran with Dowth Hall, this pair also won the same class on Thursday.  This is yet another Irish bred horse showing off its class.  In second place was Lila Bremner (GBR), once again on the podium with the gelding, Cocktail D’Azur and taking both third and fourth place was Eleanor Hall Mcateer (GBR).  Eleanor was a mere fraction of second behind Lila with the gelding Hello Franklin who is by Billy Mexico and owned by Lady Pauline Harris. In fourth she was riding the Stallion, Hello M’Lord who is owned by Lord and Lady Harris and Lady Kirkham.

In the 6yr old Young Horse Class the Spanish rider Kevin González de Zárate easily rode the mare, Kristal’s Beauty B, who is owned by the Valbanera stud into first place with a very fast time.

Tomorrow there are six classes and the1.45m GP Longines Ranking class which will be held in the main grass arena at 14:30.