Marek Lewicki is today’s victor in the Geolastic Trophy sponsored class, a warm up for tomorrow’s N 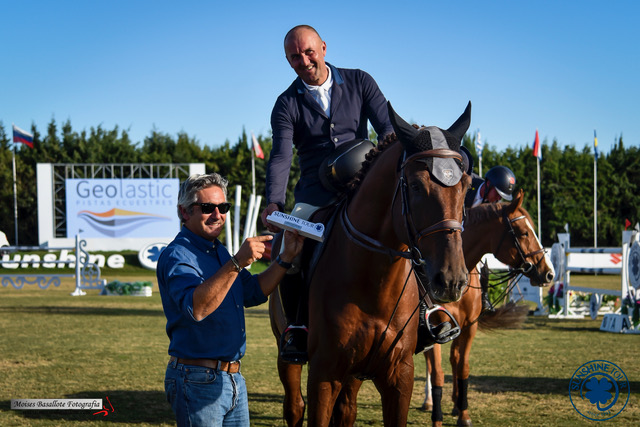 There will be 20 countries represented in the Nations Cup which will begin at 11:30h. Spain, the host country, will be 10th to go.

Today we started off the last week of competition in our October Tour, here at the Dehesa Montenmedio.  It was a beautiful sunny day with 623 horses taking to the arenas, many using classes as a warm-up for tomorrow’s Nations Cup, which is generously sponsored by Victoria beers.  The Nations Cup round will start at 11:30h, and with 20 countries participating it will be a great event.  The course is set at 1.45m and run over two rounds, with just eight teams moving on to the decisive second round where the Victoria Trophy will be won.

Today there were nine classes running and the Big 1.50m class was one of the real highlights of the day.  The winner was the well known Belgian rider Ludo Philippaerts who was riding Laurier.  This grey BWP is by Zirocco Blue and is owned by the Philippaerts. Ludo himself needs little introduction,  he is a European Silver medalist,  has represented his country four times in the Olympic Games and finished in the top seven, three of those times.  He has participated in thirteen World Cup Finals and finished in the top ten four times.  He has also completed ten European Championships and three World equestrian Games.

Back in 2014 Ludo made the decision to leave competition and move on, focussing on training his sons, who are now top 50 in the international rankings.

However just this year, he decided to return to the competition arena, amazing everyone as he stated back up on top form, as if he had never left.  Today he continues to delight us with a superb show of horsemanship and a big win in one of the most important of today’s classes here at Dehesa Montenmedio.

Second place went to Alexander Zetterman who is part of the Swedish team that will kick off the Nations Cup tomorrow.  With Alexander at the reins of the 10yr old bay gelding, Conrad by Catoki they should prove to be a very competitive team! In third place was the German rider Pia Reich with the mare PB Stagenta owned by Paul Bücheler.

The other impressive class today was the Geolastic Trophy.  There were 133 riders in this class, many schooling around ready for tomorrow.  Our winner was Marek Lewicki from Poland who was just unbeatable on the amazingly fast La Pezi. He took top of the podium away from the Italian rider Giampiero Garofalo withNarcotique VH Dingenshof beating him by 0.10 of a second. Very close on their heels was the Irish rider Anthony Condon with his new ride, the mare Ajaccienne who is by Calvaro FC.

The 1.40m of the CSIO3* was easily won by a member of the Swiss Nations Cup team, Romain Duguet riding Alldream Delacense;  in second was the very successful Dutch rider, a regular here, Kim Emmen riding Ikannan V G  and finally in third was another Irish rider, Kevin Gallagher who was riding Clark.

It was an Irish whitewash for the top three in the 1.40m, Big Class CSI2*, with Francis Derwin taking first, and then Michael Pender and Max Wachman slotting in behind on the podium in this busy class with more than 120 entries.  Their winning horses were, in order;  Deep Pockets, HHS Fortune, who is also by Catoki and Ikaros.

In the other CSI2* classes we had a good win from the American rider Julie Welles with the lovely Caelle in the 1.35m class and in the 1.30m class there was British success from the hands of Lila Bremner with Cocktail D’Azur.

The Young Horse classes were also well attended today and once again in the most mature class, Luca Moneta rode his two 7yr olds into the top two places.  The Italian rider is having great success with both of these horses and they look like they will move on easily up the levels as they reach their 8th years.  He took first with Jolie Coeur D’Avril and second with Epic.  Kim Emmen had to make do with third today on the lovely Astrid’s Lad.

In the 6yr old class King Lepantino, who is by Arezzo VDL, dam sire Lord Z, had his first win with the Polish rider Marek Lewicki.

Tomorrow is going t be an important day of jumping as 20 countries compete for the Victoria Trophy in the Nations Cup.  The host countries team members will be: Sergio Álvarez Moya; Manuel Fernández Saro; the current Spanish Champion, Ismael García Roque, and Santiago Nuñez Riva.

The showground is open to the public with free entry and you can follow all the action live on ClipMyHorse.TV, on our web page or through the Sunshine Tour App.