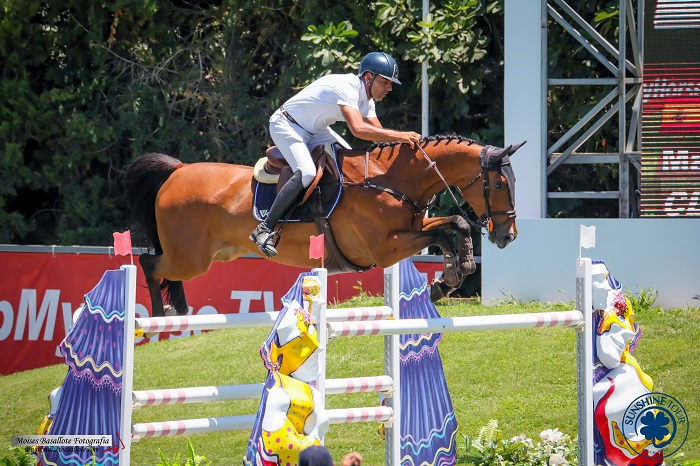 Montenmedio is about to wind up this three week long Summer Tour, which has been successfully held under especially demanding circumstances due to the COVID-19 pandemic.

The sheer size of the installations with over 20 arenas and around 1,000 stables has meant that this was the ideal place for the return of competitions, where security and sanitary protocols could easily be fulfilled.

Tomorrow is the last day here and the highlight of the Tour will be the Grand Prix, FEI Ranking class with 25,400€ in prize money and an extra 2.000€ to the highest placed Spanish rider and subscriber to the ClipMyHorse channel. Qualifiers for this class were held over the last two days in the 1.45m classes.

Mariano Martínez Bastida is unstoppable here at the Tour, today, on his birthday, he took his 16th place at the top of podium. This Spanish rider is from Murcia in Spain and today he was the winner of the Small Grand Prix riding the very consistent CLEARTOON (x CARTHAGO). Second and third places went to Ignace Philips de Vuyst with MODEST VD VROENTE (JOKINAL DE BORNIVAL x OBSESSION) and Juan José Gómez with FRAPPANT (x WARRANT), the first time in the top three for both of these combinations here at the tour in this class.

Sergio Álvarez Moya riding MHS ATTRACTION (NUMERO UNO x DIAMANT DE SEMILLY) was the winner of the 1.35m class. This was their first show together and the 10yr old mare really showed her speed in the jump off of eight horses. This Olympic rider and three time participant in the World Championships has been schooling and competing here with various horses since the beginning of the Tour. In second place was Silvia Diego Pardo and CALIPSO VAN DE BERGDALHOEVE Z (x CENTO LANO), and in third was Fernando de los Santos riding KANSAS VD WITHOEVE (PRINCE VAN DE WOLFSAKKER x CONCRETO).

The Ponies were back in action today in a CSNP1 qualifier for the Spanish Pony Championships. The winners were: Section A: Valeria Chaves, Section B: Mar Valdés, Section C: Paloma Gómez and in Section D: Blanca Valdés.