Michel Hughes with ´First de Murger´ and Ellen Whitaker with ´SJL Fizzy Tart´, winners of the 7yo 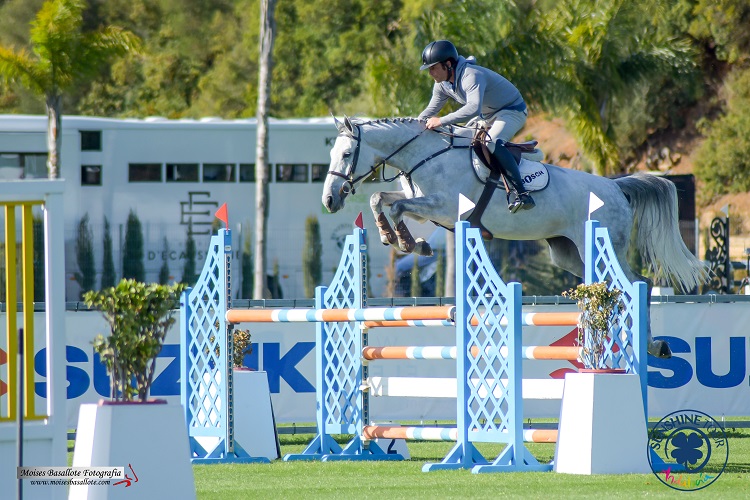 The American rider Michael Hughes, stopped the clock in 62.83s in the first section of the 1.30m, 7yr old class today.  He was riding ‘First Du Murger’ in this demanding class held on grass in the Hickstead arena.  ‘First Du Murger’ is an impressive stallion by the legendary stallion ‘Kannan’ and his dam sire is equally famous, being ‘Quick Star’.  He is owned by the Stephex Stables.

In this section the Austrian rider, Bianca Babanitz once again rode ‘Bella E Impossibile BBA’ (‘Lavagon’, ds ‘Lando’) into the rosettes.  Yesterday this pair took first place but today had to settle for second, with their time of 62.93s.  German rider Kendra Brinkop had a really good day today and was third in this section with ‘I’m Fancy VDM Z’ (I’m Special de Muze’) and 7th with ‘Tabasco de Toxandria Z’.  Irish rider Jessica Burke was fourth with ‘Billy Utah’ a mare by ‘Cevin Z’ and Swiss rider, Martin Fuchs with  ‘Pina Van de Moerhoeve’ was 5th.

In the second section of the class there was a British win for Ellen Whitaker with a horse we have already seen win, in week one here at Montenmedio,  ‘SJL Fizzy Tart’ a mare by ‘Locarno 62’  Today this pair won thier section of the class in 63.26s.  Irish rider Sean Monaghan was second in 63.33s, with another mare, ‘Domino Van Het Gehucht Z’ who is by ‘Dominator 2000 Z’.  Belgian rider Manuel Thiry rode the stallion ‘Fabregas S’ (‘Nevados S’)  into third place.  Ezequiel Ferro Menéndez from Argentina was fourth with ‘Centopia’ (‘Chetlag’) whilst the Swedish rider Jacob Hellström was once again successful with ‘Cidfire EN ’.  This pair were second yesterday and also had both a third and fourth placing last week.

The placings in each section respectively were: Second;  Bianca Babanitz with ‘Chicago Freestyle’,  Spaniard Álvaro González de Zárate ‘Chust Do It’ and Kendra Brinkop with ‘Oak Grove’s Heartthrob’.  Third;  Argentinian rider Ezequiel Ferro and then Manuel Thiry had both of the other third places, one with ‘Quibelle AEG’ and the other with ‘Daylight EM Z’.

In the first section of the 5yr olds Olivia Gent (GBR) was our winner with the mare  ‘Avant Garde HST Z’, who is by ‘Agana van Het Gerendal Z’;  second was Bianca Babanitz with the ‘Stakkato Gold’ gelding,  ‘Safe Me’ and in third, once again at the top of the results, was Manuel Thiry with ‘Daredevil Z’.

In the second section of the 5yr olds the winner was Belgian rider Dries Dekkers with   the mare ‘D&J Idefix’ who is by D&J Havanna, ds. Mr Blue.  Second was Rumanian rider, Dana María Panaite with ‘Rocco de Guldenboom’ and third was Portuguese rider Silva Morgado with ‘Conquista Z’.

Tomorrow there will be a very busy day of jumping here at Montenmedio.  The Young Horses will finish off their second week of jumping.  We also start up the second CSI4* of the Andalucía Sunshine Tour 2022 with a range of classes including a qualifier class for this Sunday’s Grand Prix.