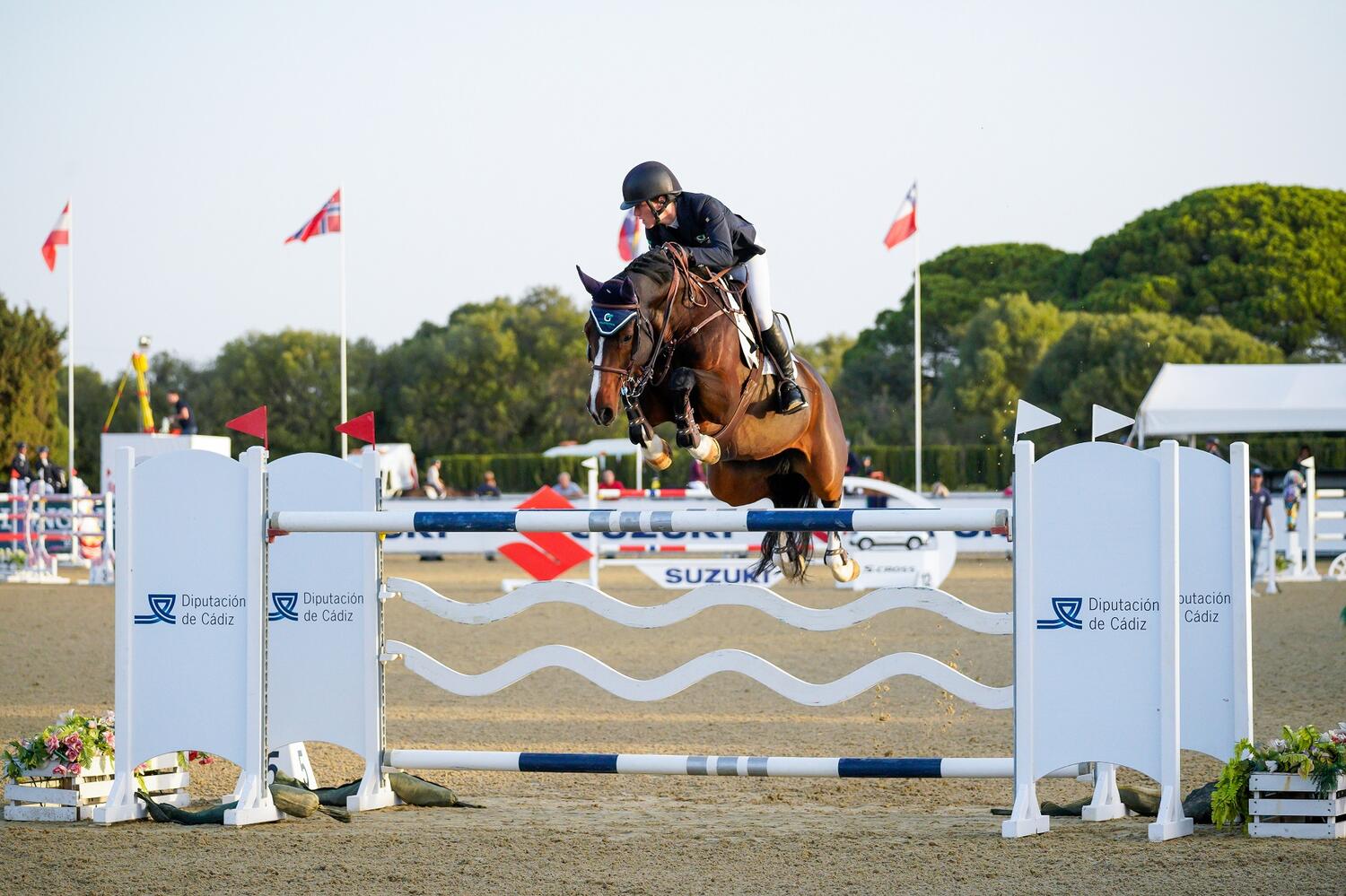 Tomorrow is Nations Cup day with 15 countries putting forward teams. Action starts at 12, on grass, in the David Broome arena

It was a busy day of jumping here at Montenmedio and started off early, with the CSIO3*, 1.50m class in the Milton arena. There were 27 entries in the class but the Irish rider Niamh Mcevoy, who has been successful here on various horses, literally flew into an untouchable lead with the 8yr old mare, ’Aconzina PS’ (‘Action-Breaker’ x ‘Conthargos’) who is owned by ST Stables SPRL. This pair jumped really tidily around the course in 65.40s and showed that they have a great partnership, this being Niamh’s best win so far here at the II Andalucía October Tour.

In second was the Spanish rider Jesús Garmendia Echevarria, with ‘Sandano 2’ (‘Sandro Boy’ x ‘Boixac S.A.’) and in third was the Belgian rider Jeroen Appelen with ‘Ghost Z’ (‘Game Boy D’ x ‘Quentucky’). Fourth was Swedish rider Stella Röhlcke with ‘Delina’ and to finish off this entirely international scoreboard, fifth was the French rider Emeric George with ‘Dune du Ru’.

The 1.45m class in the David Broome arena was used by many riders as a preparation towards tomorrow’s Nations Cup. This made it a very interesting class to watch but many riders who are in the teams, retired after they had jumped fence 9.  This was the water jump, for which there was an option which, if chosen, added a few ‘seconds’ to the time in this 2PhSp class. There was no chance that our winner was schooling around today, or that he was going to take the slower option. British rider, Robert Murphy did an incredibly fast time in this second phase with no one coming close to catching him and the wonderful 17yr old ‘Ayrton IV’ (‘Cantos’ x Burggraaf NV’) who is owned by Davis Andrews. Their round was very neat and quick, once again  demonstrating what a great partnership these two have, which we already saw in action in the Ranking class on Saturday where they took second place. We look forward to seeing Robert tomorrow with his other horse, on the British Nations Cup Team.

Tomorrow we shall see many of these top riders in the Nations Cup which takes place  in the David Broome arena from 12:00 onwards.  With 15 nations participating it will be a hotly contested competition.  The drawn order is as follows: Ireland, Switzerland, Spain, Canada, Brazil, Italy, United States, France, Sweden, Colombia, Denmark, Belgium, Portugal, Great Britain and Argentina. This will be sponsored by Cervezas Victoria and is also a qualifier for the European Championships 2023.

The CSI2*classes were very busy today as were the Young Horse classes. The 1.40m class had so many entries that is was split, with each section being won by a Nations Cup Team rider! The British winner was Skye Higgin with ‘Gotcha’ and our American winner was Mavis Spencer with ‘Contonio’. Eleanor Hall Mcateer was the winner of the 1.30m class with ‘Billy Penny’.

In the 7yr olds, Rodrigo Giesteira Almeida was again top of the podium this time riding  ‘Karonia L’. This Portuguese rider is having a great time here the Tour with repeated podium finishes from his horses and he is also a Nations Cup team rider. Kevin Gallagher the Irish rider steered, ‘Vino Bianco Van Overis Z’ to victory in the 6yr olds whilst another Portuguese rider,  Bernardo Ladeira Pereira with ‘Hey Babby’ won the 5yr old class.

Tomorrow there is also the 1.45m CSIO3*; and there are five CSI2* classes, including a Longines Ranking class. The Young Horses will also take to the arenas. We encourage you to come and enjoy the action here at Montenmedio but if you are unable to attend you can watch live and for free on the Sunshine Tour app and on our website, www.sunshinetour.net, through ClipMyHorse TV.