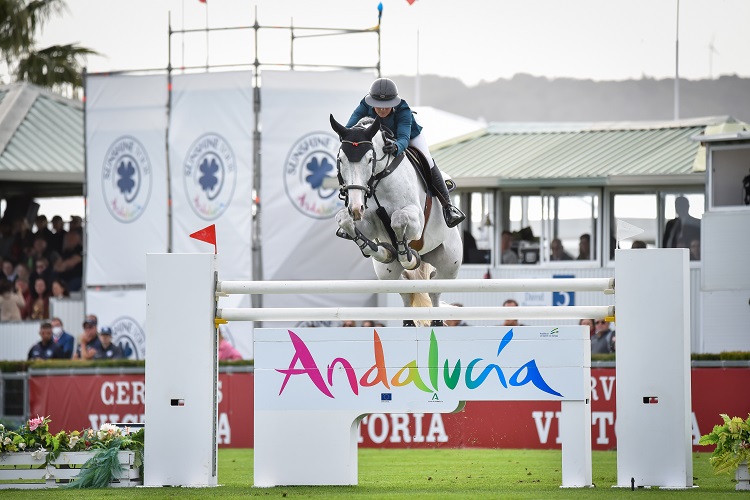 Armando Trapote jumps a fabulous round, taking second place with‘Tornado VS’ and beating the best 50 riders here this week!

The talented French rider, Penélope Leprevost,  was the winner here today in the Big GP, Longines Ranking class, set at 1.55m.  Penelope is currently ranked at number 57 in the Longines World Rankings, and her list of achievements is very impressive.  She is a three times Olympian and regularly rides on the Nations Cup teams.  Indeed she told us in her interview after the win, that the lovely grey stallion,  “GFE Excalibur de la Tour Vidal’ has had a holiday since he competed last year in Barcelona in the Nations cup”.  She also told us that she has been gently building him up over the weeks of the Tour,  in the smaller classes, and today she felt that he was ready to do a big class, and clearly he was.

The GP today was a very interesting class and there were only four clear rounds in the first leg.  ‘GFE Excalibur de la Tour Vidal’ (Ugano Sitte x Ogano Sitte), was last to go in the jump off and was chasing the time of 40.13s that the Spanish rider based here at Montenmedio, Armando Trapote had set with ‘Tornado VS’.  Penelope rode a very forward, neat round, with careful turns and stopped the clock in 35.92s to take the win.  She told us that she liked the course which was built by Javier Trenor, and that it was ideal for her horse as “it was not too big but it was very technical”.

This meant that Armando Trapote with the very athletic, 11yr old, ‘Tornado VS’ by Toulon x Contender, ended up in a well deserved second place, being the only other pair to jump clear in the jump off.  This gelding is owned by Yeguada Valbanera.  In third place was the Brazilian rider, Felipe Amaral who had a pole in the jump off with ‘Androide 3K’ (VDL Zirocco Blue).  The last two places were taken by German riders; fourth was Jens Baakmann with ‘Nomanee’ and Laura Klaphake who had just one time fault in the first round, was fifth with ‘Quin’.

Laura Klaphake had a really  great day today as earlier on she had a stunning win in the Small GP of the Big Tour, which was also a Longines Ranking class.  Riding ‘Davenport VDL’, who is an 11yr old stallion by Diamant de Semilly x Indoctro, her time was way out in front of any of the other competitors that went clear, in this extremely competitive jump off.  She stopped the clock in just 32.67s, setting such a fast ‘time to beat’, that quite a few other competitors had a pole chasing it.

Andre Reichmann with  ‘Quinetto Z’ for Brazil was second in 34.11 seconds and in third was Tim Wilks for Canada with ‘Diamanthella VG Z’.  Hendrik-Jan Schuttert with ‘Good Farming HS’ was fourth and in fifth, was Michael Hughes (USA) riding ‘Maya-S’.

In the Big Tour 1.35m there was a Spanish top three.  The class was held in the Big Star. arena.  Hugo Álvarez Amaro was the winner with ‘Jimmy Phin’;  second was José Bono Rodríguez with ‘Ali Baba HT’ and in third, was  Alejandro Álvarez Gutiérrez with ‘Little Chap S’.  British riders, Karl Robins with ‘Stapleton Mist’ took fourth and Samed El Dahan ‘Argentah’ was fifth.

The Medium Tour 1.40 was a split class as entry numbers were so high. The winners were,  Sara Vingralkova  (CZE) with ‘Damocles from Second Life Z’ and  Holly Smith (GBR) with ‘Kimba Castello’.  Second places were taken by the German rider,  Kendra Brinkop with ‘Eclatant’ and the Irish rider, Billy Twomey with ‘DXB Legend’.  Third places were taken Brazilian rider, Felipe Amaral with ‘Carbas’ and British rider Robert Whitaker with ‘Vermento’.

José Bono had another success in the Medium Tour 1.30 with ‘Nokito VD Weretherbach Z’;  second was Dutch rider, Tamara Klop with ‘Happy Handsome’ and  Sara Vingralkova was again in the rosettes, this time with ‘Oscar des Fontaines’ in third.

In the 1.40-1.45 the next two places went to Spanish riders, Olivia Álvarez García with ‘Gazquine TAG’ and Leticia Riva Gil with ‘Zamarano Z’.

There was a British win by Lucy Blari with ‘Chapon VD Heffinck Z’ in the Small Tour 1.35 with the Norwegian rider,  Maria Louise Kingsrod taking both second and third places:  ’Urioso de Laume’ was second and‘Orlando Van Klapscheut’ was third.

Tomorrow we end this fifth week of jumping here at the Andalucía Sunshine Tour with another 10 classes, which include the GPs for both the Medium and the Small Tour.