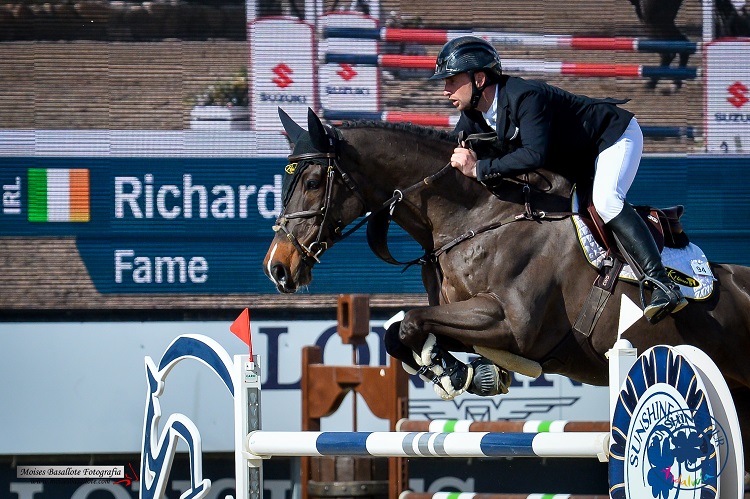 The Irish rider was the first big winner in the 1.45m Ranking class riding ‘Fame’

Spanish rider, Mariano Martínez Bastida also had a great day with wins in all three of the Young Horse Classes

With this week well under way,  Montenmedio is up and running and will be, once again, the global epicentre of competition right up to the 27th of March

Montenmedio is up and running and once again, the global epicentre for the sport this spring.  Competition started yesterday but horses and riders have been arriving all week from far flung places all over the world;  all eager to get going in the wonderful winter sunshine here at the Andalucía Pre- Sunshine Tour 2022.

Yesterday was the first day of competition with both old friends and new, getting themselves settled and acclimatised.  Today the air of competition was far more noticeable with a busy day of jumping taking place.  There were 9 classes today and around 200 caballos competing, with many others schooling and working in the training arenas.

The top class today was the very first of 42 FEI Longines Ranking classes, that will be held  here throughout the Tour.  This demanding 1.45m class was won by the Irish rider, Richard Howley, who is no stranger here at Montenmedio.  Today he was riding ‘Fame’ who is by Harley and owned by Sarah Borthwick.  Their time, in the second phase, was extremely fast, just 30.96 seconds and no one came close to beating this talented pair.  Second place was taken by a rider from the USA ,Paris Sellon who was riding the mare ‘Anna Jo’ stopping the clock in 33.59 sec, and I am sure we will see more of this talented pair as the show progresses.  Tim Wilks who rides for Canada, had a beautiful round with ‘Diamanthella VG Z’ and took third place in 33.69 sec just behind Paris.  Spanish rider Thierry Brossard with ‘Arthur du Moulin’ was fourth with the Portuguese rider Adir Dias de Abreu with ‘Tashmir Z’ in fifth.

In the 1.40m speed class, Egyptian order Karim El Zoghby took the top spot winning in just  57.25 sec with his gelding ‘F-Narcist’ who is by Napels.  Nicolás Toro Linares from Colombia was second on ‘Baloubelle’ and the amazing Swiss rider Martin Fuchs rode ‘Diva Van Het Cauterhof Z’ into third place.  In fourth was the Swedish rider, Antonia Andersson with ‘Dexter’ and fifth was Spanish rider, Carlos López-Fanjul with ‘Ashaane Villa Rose’ .

Catherine Pasmore from the USA had a good day, with seventh place in the Longines class under her belt she also won the 1.35m class.  This was a really competitive two phase class.  Riding the mare ‘Came’ by Camero M, the pair flew around with nearly six seconds in hand over the British rider, Serena Kullich with ‘Trakadon’.  Paris Sellon was once again on the podium, taking third place with ‘Bec Alter Ego’.

Spanish rider Manuel Román Álvarez was the winner of the 1.20m class with ‘Windflow’, second was Dan Kremer (ISR) with ‘Jarrera’ and Serena Kullich had another podium finish this time in third, with ‘Cognac des Iris’.  The 1.10m class was won by Belgian rider Jan Rene Boyen with ‘Espresso’, repeating his place on the podium from the 1.30m and in second was William Walker this time riding ‘Corino du Rouet’.  Third was the Columbian rider Camilo Robayo with ‘Jackie’.

In the Young Horse Classes a good day of jumping was seen with many stylishly ridden clears. Spanish rider Mariano Martínez Bastida was top of the podium with his horses in all three age sections.  7yr olds, ’Falbala Pironniere’ who is by Upsilon;  6yr olds ‘Sherlock’ and in the 5yr olds Magnifique’

The 5yr old class was a two phase class and in second place was another Spanish rider Marta Garat with ‘Nasa del amor’.  Anastasiya Kirnarskaya from Russia with ‘Mr President’ who is by Vigo d'Arsouilles was third.  Taking both fourth and fifth was local rider Alejandro Fernández with ‘Conmirello’ and ‘Milot’ BSW.

Competition continues tomorrow with the three Young Horse classes and four International 2* classes which kick off our 2022 season here at Montenmedio.  All in all there are 12 weeks of open air jumping here this winter. The two weeks of the Pre-Andalucía Sunshine Tour end on the 30th of January and after this we will begin seven week of top competition here at what really becomes the epicentre of the sport at this time of the year.

This year Montenmedio will also hold the National Spanish Showjumping Championships and we greatly look forward once again to the Autumn Tour which was a great success last year.

Around one hundred riders and more than 300 horses are currently registered at the show  with numbers due to increase up to 700 riders and 2,500 horses as the weeks progress.   In February and March riders from 50 different countries will be competing here in these magnificent facilities with twenty exterior arenas, of both grass and geo textile.  The riders and horses will also be able to benefit from our impressive new covered arena which has a removable roof and is the largest of its kind in the world.