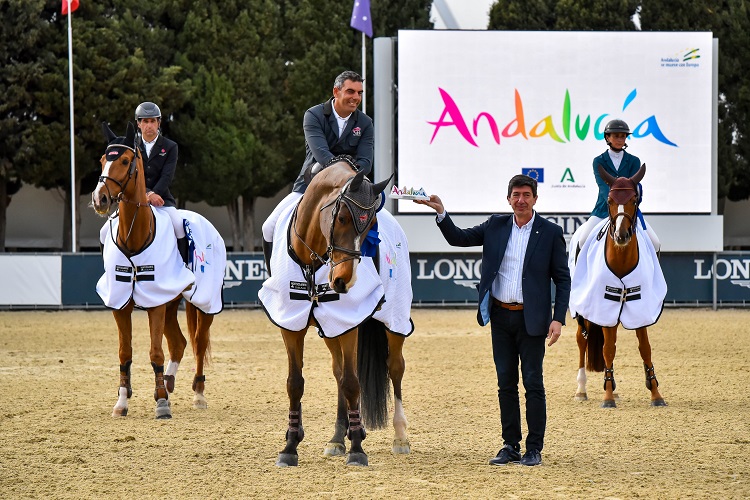 Winner of the Medium Tour Grand Prix he, received his trophy from the vice-president of the Government of Andalucía, Juan Marín

The Spanish national anthem rang out across Montenmedio today thanks to a blazing win from Mariano Martínez Bastida with ‘Belano VD Wijnhoeve Z’ in the Andalucía Medium Tour, Grand Prix class.  He was second last to go in the jump off and everyone really thought that Holly Smith (GBR) had the win in the bag with the amazing ‘Fruselli’, as she was the fastest clear after a fabulous round in just 36.99s. The crowd were cheering her on all the way round especially after the last sharp turn into an upright and a long gallop to the last fence.  In came Mariano and rode like the wind, once again with the crowd following every second and when this Spanish pair stopped the clock in an utterly astounding 36.76s the crowd went wild.  After the class Mariano told us that he was absolutely delighted to win here with the 13yr old, who is by Berlin (dam sire, Darco).  He told us ‘he’s a big horse but he is very agile which is why he was so great today in this class’.

This left Holly Smith with ‘Fruselli’ (Zambezi TN, ds, Karandasj) who is owned by Holly  herself and T J Hall Ltd,  in a well deserved second place.  In third was the German rider Jens Baackmann with ‘Aglaia J’ this pair were also fourth on the 11th, in the 1.45 Medium Tour Ranking class and yesterday Jens also took fourth with ‘Nomanee’ in the Big Tour GP.

Yesterday’s winner of the Big Tour GP,  Penélope Leprevost (FRA),  was riding  ‘GFE Candy de Nantuel’ today and they took fourth place.  In fifth was Kendra Brinkop (GER) who is no stranger to the podium here and today she was riding ‘Narcos VD Smidshoeve’.

The winners from received their trophies from the vice-president of the Government of Andalusia, Juan Marín.

In the Small Tour Grand Prix there was a British winner.  Lila Bremner rode a superb first round and a very fast and accurate second round to win the class with ‘Memphis V/D Vaart’ (Elvis Ter Putte, ds,Up Chiqui).  She stopped the clock in 32.22 seconds just ahead of the Canadian rider who took second place in 32.63s,  Kimberley Martens who was riding ‘OO Seven de L’Equipe’.  In third was the Spanish rider, Rocío Lázaro Alonso with ‘Infamia del Amor’. Irish rider’s took the next two placings, in fourth was Emily Turkington with ‘Djumbe D’Amour’ and in fifth was Sean Monaghan with ‘EMS Adelaide’ who trains Lila, and was cheering her on from the stands in the jump off.

Competition continues on Tuesday after the rest day tomorrow.  This will be the sixth week of the Andalucía Sunshine Tour and as usual, will start up with the three age groups of the Young Horse classes, the 5, 6 and 7YOs.